The Age of Imagination: Japanese Art, 1615-1868, from the Price Collection. The exhibition features screens, hanging scrolls, and fan-format paintings. Hosoe Eikoh and Butoh: Photographing Strange Notions. The display consists of three series of works featuring Butoh, an iconoclastic dance form often employing grotesque imagery and transmutation of the dancer into either an animal or person of the opposite sex. 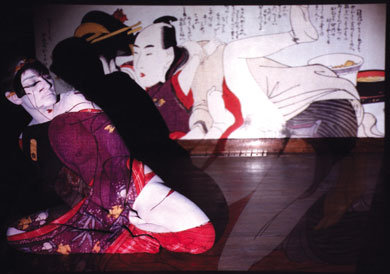 The Etsuko and Joe Price Collection is world-renowned for its collection of Japanese paintings of the Edo Period (1615–1868) featuring screens, hanging scrolls, and fan-format paintings. The Price Collection reflects the eclectic diversity of a remarkably creative span in Japan's history of visual art and is highlighted by some of the finest examples of the distinctive and compelling renderings of animal life by Ito Jakuchu (1716–1800), an artist who caught Joe Price’s eye five decades ago, when the artist was fairly unknown. The collection also features Kansai-region artists such as Maruyama Okyo, Nagasawa Rosetsu, and Mori Sosen, and artists of the Edo Rimpa school including Sakai Hoitsu and Suzuki Kiitsu. The exhibition has been on a four-city tour in Japan with enormous success; it was the highest-attended exhibition in the world in 2006

Eikoh Hosoe ( b. 1933) is considered a preeminent contemporary Japanese photographer and filmmaker; he emerged in the experimental arts movement of post-World War II Japan. This exhibition consists of three series of works featuring Butoh, an iconoclastic dance form often employing grotesque imagery and transmutation of the dancer into either an animal or person of the opposite sex.

Two murals will be displayed, one based on the 2003 photographic series Ukiyo-E Projections and the other based on a series of photographs in which the Butoh dancer, Ohno Kazuo, dances within projections of a folding screen painted by Soga Shohaku, an eccentric artist living in Kyoto at the end of the eighteenth century. These photographs will be transformed by the artist into a mural that expresses his interpretation of Shohaku's work. A third series, Kamaitachi, will be presented as framed photographs. Kamaitachi refers to a swirling, cutting wind, in legend depicted as a supernatural being that haunted the Japanese countryside of Hosoe's childhood. Using the avant-garde artist and dancer Tatsumi Hijikata, Hosoe created a series of photographs with the dancer seen as this wandering ghost, mirroring the stark landscape and confronting farmers and children.