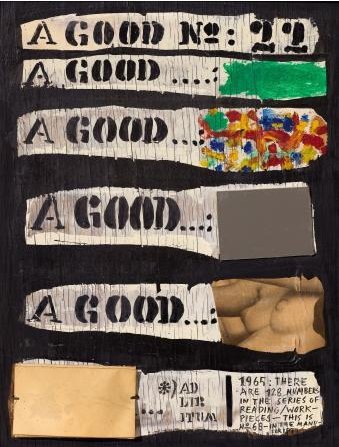 "Any communication is a collage of variegated signals." – Arthur Køpcke

Kunsthal Charlottenborg will be brimming with collages, assemblages, film, sound, painting and sculpture when works by Al Hansen and Arthur Køpcke are shown in separate wings of the gallery.

Action and Remains is the title of the double exhibition. ‘Action’ because both artists worked with actions, performances and works that in various ways encouraged active participation from the viewer. ‘Remains’ because what is left are the remains of these projects, performances and actions, but also because both of them employed the debris of the everyday in their production.

Al Hansen and Arthur Køpcke shared era, colleagues and zeitgeist. They brought international currents to Denmark at a time when the Danish art scene felt far removed from the metropolises in Europe and the US, both physically and mentally. Both artists had an unpretentious and casual relationship with the audience, encouraging active participation – and thus helped create the bedrock of our contemporary art’s cross-medial works as well as interventions, performances and social design.

An American, Al Hansen (1927-1995) primarily worked in New York but being an inveterate nomad he spent long periods of time in Denmark, Germany, Italy and the Netherlands. A seminal figure in the Fluxus network, he if any dissolved the boundaries between the life he led and the art he created. Hansen was Fluxus – always on the move and always with the materials for his works at hand. His works are a humorous and intelligent conglomerate of neo-Dada, Fluxus and pop art.

Arthur Køpcke (1928 - 1977) was German, married a Dane and settled in Copenhagen. For half a decade, until 1963, he ran Galerie Køpcke in the city which, nourished by his radical innovation and driving force – became the centre of European avant-garde. Here came Robert Filliou, Diter Rot, Jean Tinguely, Daniel Spoerri, Piero Manzoni and others, and from the domestic art scene Albert Mertz, Gunnar Aagaard Andersen, Preben Hornung and others. An impressive array of exhibitions was presented at Galerie Køpcke but it was also a significant stomping ground for an alternative art practice that bloomed on the Fluxus scene in Copenhagen as well as abroad.

The Al Hansen exhibition is concentrated on the works he ‘left’ in Denmark, supplemented by works from two pivotal collections in New York and Berlin. Curator is Maria Gadegaard, Kunsthal Charlottenborg.

The Arthur Køpcke exhibition is the most comprehensive one of its kind to date, comprising works from more than forty collectors and six institutions in Denmark and Germany. Curators are artist Claus Carstensen and Helle Bøgelund, Kunsthal Charlottenborg.

A bilingual catalogue has been produced for the exhibition, containing 300 pages with colour photographs of all the exhibited works, texts on the artists and their time as well as a list of works and CV’s. The writers are Helle Bøgelund, Maria Gadegaard, Simon Anderson, Morten Søndergaard, Claus Carstensen and
Marianne Bech.

The photographs are taken by Anders Sune Berg, and the graphic design is by Rasmus Koch Studio.

Until 30th august:
works that work

Works that work is an exhibition that focuses on the process and the experiment, on works that don't stop with the artist's finishing touch, but continue to change due to the visitors contributions and interactions during the exhibition period. For example, you can spend a night at the exhibition, sleeping in a camp bed along with 11 others. Or you can go round town recording intriguing or irritating sounds that will then be included in the exhibition's sound installation. You can take a harbour tour with DFDS Canal Tours and be treated to an alternative account of Copenhagen's history. Or you can get clean and cool in the temporary shower out in the yard at Kunsthal Charlottenborg, surrounded by decoratively painted camper vans and a 3-metre high rocket built of sand.

By calling the exhibition works that work the curator, Charlotte Bagger Brandt, wants to signal that these are interactive works: ingeniously constructed pieces with active mechanisms. But they are also works that work upon you. Several of the artists animate new trains of thought, inviting you to step outside customary boundaries. Bagger Brandt has invited 7 groups of young artists to take part, putting the focus on contemporary art that communicates with the public and encourages active participation.