The Japanese photographer in what constitutes the most comprehensive retrospective of his fascinating oeuvre. The exhibition consists of more than seventy photographs, along with a sculpture of the great master of black-and-white photography. For the Berlin station the artist is planning an entirely different presentation of his work that will highlight relations to the Berlin collections (Gemaldegalerie, Alte Nationalgalerie) as well as the architecture of the Mies van der Rohe building. 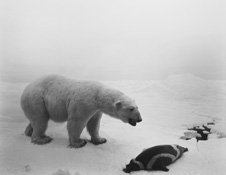 Beginning on July 4, 2008, the Neue Nationalgalerie will feature the Japanese photographer Hiroshi Sugimoto in what constitutes the most comprehensive retrospective of his fascinating oeuvre to be presented up to now in German-speaking countries. Berlin is the third station of a tour which also goes to Düsseldorf, Salzburg and Lucerne. The exhibition consists of more than seventy photographs, along with a sculpture of the great master of black-and-white photography; it demonstrates the great diversity of his groups of works, whose impressive clarity and precision immediately catch the viewer’s eye.

For the Berlin station at the Neue Nationalgalerie the artist is planning an entirely different presentation of his work that will highlight relations to the Berlin collections (Gemäldegalerie, Alte Nationalgalerie) as well as the architecture of the Mies van der Rohe building.

Hiroshi Sugimoto has been working for more than thirty years almost exclusively in the medium of black and white photography and creates extremely precise, very calm representations which are concerned with questions of reality and image, with time, with its passage and preservation, and above all with shadow and finely nuanced gradations of gray tones. His works are extremely concentrated, present and engaging. In their clarity, they radiate stillness and quiet and to some extent have a meditative effect which one is inclined to associate with the Japanese background of the artist. Sugimoto was born in Tokyo in 1948 and, at the beginning of the nineteen-seventies, settled first in Los Angeles and then in New York where, in addition to his residence in Tokyo, he continues to live and work today.

Sugimoto always works in series which frequently extend over several years. His themes are highly diverse but are connected in their origin by the fact that they are never a matter of spontaneous snapshots, but rather of painstakingly conceived and planned photographs which are realized with great precision and technical perfection. “I am not a hunter,” Sugimoto says. “I already have the pictures in my head, then I go out in order to realize these ideas.”

His earliest series was that of the dioramas. In the American Museum of Natural History in New York, he began to photograph the taxidermically prepared and stuffed animals in front of painted backdrops. These pictures annul the border between three-dimensional “reality” and two-dimensional deception, causing the representation to appear more real than the diorama itself, and thereby raising questions about reality and depiction as well as about the objectivity of photography. Sugimoto’s series of portraits, in which he photographed famous figures such as Henry VIII and his six wives in Madame Tussaud’s Wax Museum, likewise plays with this unsettling discrepancy between illusion and reality.

An investigation as to how it is possible to retain a film over its entire length in one single picture led to his series of theatres, in which he recorded lavishly decorated American film theatres as well as drive-in cinemas through time exposures over the entire duration of the particular film being presented. In these photographs, the screen appears totally white, as if light were radiating from within it.

The origin of the Seascape series is related to another aspect of the fleeting nature of time. Sugimoto asked himself “whether it is possible today for someone to see something in the manner in which people saw it in primitive times.” The ocean, as he conceives of it, is this sort of unchanging scene. His seascapes consist of photographs of water, horizon and sky which are divided right in the middle of the picture.

In addition to these series, the exhibition includes examples from Sugimoto’s work groups Architecture, Colors of Shadow and Conceptual Forms, as well as works from his most recent series of the Lightning Fields, which record on photographic material flashes of light which have occurred by chance.

Catalogue There will be an exhibition catalogue (384 pages, 221 images) with texts from Kerry Brougher, Pia Müller-Tamm, Hiroshi Sugimoto, catalogue design by Takaaki Matsumoto. 49,80 Euro available only in German.

Admission
10 Euro, concession 5 Euro
Children of 16 and under are free