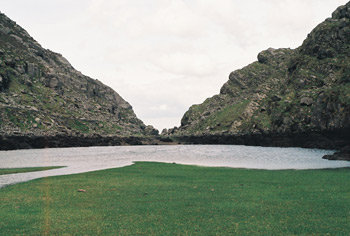 Itziar Okariz shows a new installation entitled Ghost Box produced specifically for sala rekalde. The installation comprises various sound and film captures recorded during a series of actions carried out by the artist in the Killarney lakes, a natural park in the south of County Kerry in the west of Ireland. This area is noted for its remarkable topography, since it consists of a chain of rocky mountains and three lakes. This is a natural enclave where some of the most extraordinary echoes in the world can be heard.

In her series of works entitled Irrintzi. Repetition (2006-2008), Itziar Okariz explores the acoustics particular to a number of different locations, in actions that she performs and records on video. The irrintzi is a system of communication at the limits of language, a traditional Basque call that the artist employs with ambivalence in her actions vis-à-vis the connotations of national identity and specific cultural forms of jubilation and exaltation on special occasions. This is the case of previous works such as Irrintzi. Repetition 90, 91, 92, 93, 94, 95, 96 (2006), Irrintzi. Repetition Guggenheim Museum Bilbao (2007) and Irrintzi. Repetition. Bowery, New York (2008) where the artist uses this cry as rough material for her performances, firstly removing it from its original context and then confronting it with new referents.

In sala rekalde, Itziar Okariz presents the results of this new production developed in the natural surroundings of the Killarney lakes. In opposition to a faithful reconstruction of the performance, the installation draws together the tensions existing between the action and its recording, thereby exposing the artificiality inherent in every representational process. Ghost Box reveals the specific temporality of the performance and its tendency to disappear. Every video, sound, photographic or textual recording is merely the residue of an action that itself no longer exists. The works that make up the installation at no point explicitly show what has happened. This time we are not provided with the image of the artist carrying out the action; on the contrary, phantasmatically, we are partially offered evidence of what has taken place by her voice, the spontaneous sounds captured on site, or other visual documentation from the various locations. So Ghost Box is likewise transformed into a direct gesture within the exhibition space that reveals the constant phenomenological loss of the performance as an artistic medium.

In recent years, Itziar Okariz has developed an approach in which the artistic action is posited as a way of exposing the regulation and standardisation of identity and its forms of expression. Series of works such as Climbing Buildings or Peeing in Private and Public Spaces look at new ways of altering the relationship between the public and private realms. The use of performance in Okariz's practice is employed as a symbolic tool that helps to dismember the vectors of power that control identity.

To accompany the exhibition, sala rekalde will publish a book that documents this new production by the artist. The catalogue includes texts by curator Leire Vergara, by philosopher Beatriz Preciado and by independent curator Moritz Küng.

During the same dates, The Abstract Cabinet of sala rekalde will host the project Here and now! New forms of feminist action. This exhibition is proposed as a space for encounter, reflection, debate and resistance around ways of doing that incorporate feminist thought, queer politics and postcolonial discourses in artistic practice. The exhibition focuses on different editorial practices developed internationally within the format of fanzines, magazines, and other kinds of editorial proposals. The publications included in the show such as Cuntstunt, Iconoclasistas, Artísimas, Tomboi, Malmoe, Prolongue, Grrrrl Zine Network, Girl Like Us, Mujeres Públicas, Belcro, O.R.G.I.A., Regina and Pripublikarrak among many others fit within the parameters of DIY, at the junction between editing, artistic practice, feminism and collaboration

Erreakzioa-Reacción, a collective formed by artists Azucena Vieites and Estíbaliz Sádaba, arose in 1994 as a space for developing projects between art, education and knowledge production around feminism. This group has constituted a pioneering initiative in Spain, as their fanzines introduced key texts and practices in a time that feminism was still entering Spanish Academia.

As part of the exhibition, some activities will take place. For the opening, a concert by the Basque band A duras penas will be offered. Moreover, in September a series of presentations by the collectives: Artísimas, Pripublikarrak, Wiki-historias and Tomboi will be happening together with a talk by Carmen Mörsch, director of the IAE- Institute for Art Education- of Zurich and also director of the Education Department for Documenta XII, who will talk about the role of feminism in art education and Elke Zobl, artist and initiator of the Grrrl Zine Network who will examine Internet femzines and forums as platforms for feminist action.