In our heart a longing burns. The exhibition shows works of seven artists that explore the mountains and their manifold levels of meaning: installations, videos, drawings on show. Curated by Katharina Fichtner. 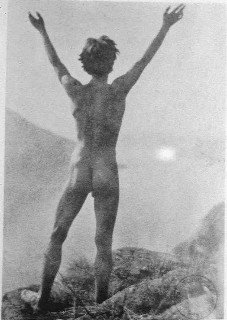 Susanne Vielmetter Berlin Projects is pleased to present a summer exhibition curated by Katharina Fichtner. In unsren Herzen brennt eine Sehnsucht (In our heart a longing burns) leads us into the mountains, to those places of longing that have had great appeal to generations of artists for hundreds of years, and continue to do so to the present day.

The mountains in their untouched state were originally considered to be residence to both the godly and the demonic, once feared for their insuperability. With the emergence of alpinism and the gradual development of tourism in the 19th century, a new enthusiasm for the mountains arose, which was shared by many artists. In particular the avant-garde and the members of the reform movements of the early 20th century were struck by the alpine world in its unspoiled state. In the Alps, artist-groups and communities were looking for an alternative environment to the increasingly crowded cities – like the famous Monte Verità. Here, close to the mountain peaks, one could feel connected to the cosmic energies that seemed to give bracing power to utopian ideas and holistic conceptions.

Today, with the dominance of tourism, mountains can no longer be seen as places of refuge in the search for alternative approaches to art and life. The myth of the unspoiled alpine world has become a cliché; the fantasy of a unity between humans and nature, if it ever existed, cannot be maintained. Still, the subject has lost none of its charisma. The mountains with their sublimity, as imagined places of refuge, as mystical-religious lieus or as a target of identification, seem to exert a special force which is still employed by artists today. Whether they use it to express an undefined longing, to address a failed utopia or a long lost past, it is the awareness of the loss and of the unattainability, that is immanent to the subject.

The exhibition, In unsren Herzen brennt eine Sehnsucht shows works of seven artists that explore the mountains and their manifold levels of meaning. In his paintings and collages Till Gerhard refers to iconographies of ancient traditions, which have their roots in the heathen mindscape and the rites of the Alpine region. These traditions repeatedly continue to fascinate generations on a quest for spirituality and holism. The cultic experience of nature is also central to Nan Hoover’s video “Returning to Fuji“. In this work she artificially reconstructs the transition of morning, noon and night, at Japan’s Holy Mountain through a subtle change of light and shadow.

Conjuring sound effects complement the abstract depiction of a mountain, draped in mystical clouds, changing gradually its shape and finally only observable as an abstract form. With her drawings and sculptures Claudia Wieser refers to the formal language and stylistic elements of an utopian modernism, to the expressionistic architectural plans of Bruno Taut, which looked to the remarkable forms of the alpine landscape. In adopting the abstract geometric forms and reflecting them in the imagery of the mountains, she questions and reinterprets these utopian models for today. In the drawing of Michael Müller a thin pencil-line connects the Indian cities Chandigarh and Auroville. Here, embedded in the Himalayas and in the deep south of the Indian subcontinent, the modern utopian ideas took form in the realization of new cities. In an abandoned region of the Himalayas, Le Corbusier could realize his vision of a modern city whereas Auroville embodied the dream of an “urban model of human unity and an implemented, multi-ethnic society”. Within the reality of contemporary India these two cities form islands, linked only by the fictive rail of the “Utopia Express”. The work of Björn Braun contains traces of the longing for a long gone past or far away places. His installation “Schweizer Krankheit“ (Swiss Disease) is dedicated to a disease that was first diagnosed in the 17th century amongst Swiss foreign legionnaires.

They were afflicted by an emotional condition of deep homesickness and melancholy that was ascribed to the loss of a familiar realm of perception. The only cure was returning home into the Swiss mountains. The video-installation “Lagerfeuer” (Campfire) by Andreas Lorenschat describes the longing for an experience of elemental forces. The scenery at the campfire conjures up the feeling of longing while never satisfying it: the lights and noises of a nearby city perturb the romantic scenery. In his works Damien Roach depicts a loss – the loss of the fantasy of the authentic and unspoiled nature of the mountains, which, considering mass-tourism and economic commercialization, can hardly be maintained. With discreet interventions in the imagery of the everyday, often not visible at first sight, he opposes the banal with the sublime and suddenly, in the scratches of lacquer on the tabletop, an image of a dream-like mountain panorama appears.