The Order of Things

An exhibition on the uses of archival images, image archives and image banks (and various other manifestations of a classificatory, encyclopaedic impulse) in contemporary art. The display takes as its point of departure a web-based project by Vancouver photo-artist Roy Arden titled The World as Will and Representation, an online image archive consisting of a staggering 30,000+ jpegs from which Arden, who helped to flesh out many of the germinal ideas for this exhibition, selects the visual motifs for his recent digital photo-collages. 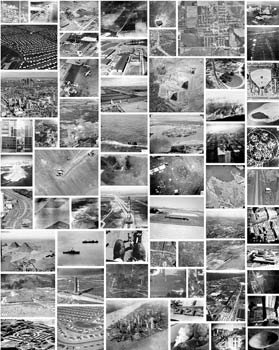 In the fall of 2008, the Antwerp museum of contemporary art MuHKA will host an exhibition on the uses of archival images, image archives and image banks (and various other manifestations of a classificatory, encyclopaedic impulse) in contemporary art.

The Order of Things takes as its point of departure a web-based project by Vancouver photo-artist Roy Arden titled The World as Will and Representation, an online image archive consisting of a staggering 30,000+ jpegs from which Arden, who helped to flesh out many of the germinal ideas for this exhibition, selects the visual motifs for his recent digital photo-collages.

In The Order of Things, this image archive's use of a stringent classificatory logic – alphabetical and thus eminently logical, yet also often bizarre in its (inevitably arbitrary) ordering of one 'class' of images after another – operates as a curatorial trigger for a sustained reflection upon the various uses of archives, databases, encyclopaedias, typologies and other "ordering devices" (the title being an allusion to a well-known book by the historian of dis/order, Michel Foucault) as methods and strategies for confronting the delirious spectacle of the contemporary image world. This delirium is of course nowhere more palpably present than in the phenomenal proliferation of (photographic) imagery that is the worldwide: the conceptual horizon of the Internet figures as one of the exhibition's defining parameters – hence the centrality accorded to Arden's own The World as Will and Representation in the exhibition, hence also the inclusion of one of Thomas Ruff's emblematic "jpeg" photographs, or of Joachim Schmid's exploration of the aesthetic of the ordered everyday in the depths of Flickr. In some sense, The Order of Things views the world as a universe entirely made up out of images/pictures (mainly of a vernacular photographic nature) and only made accessible to us through images/pictures; a world that may seem impossibly chaotic, and therefore invites all kinds of ordering interventions that seek to domesticate and contain the natural excesses of the image-world. This partly ironic, self-conscious Will to Order – a classificatory impulse that is supremely aware of its own futility, and of the fatal contingency of its classificatory criteria – is the precise juncture where the archival and/or encyclopaedic impulse in contemporary art enters into the picture: the "art of classification" that is implied in the archive, the atlas and the encyclopaedia (or its corollaries, the data-base and image-bank) is an integral self-reflexive part of what Martin Heidegger has called "the fundamental event of the modern age" – the "conquest of the world as picture."

Visual abundance and the excessive aesthetics of plenty, as formal qualities of the world encountered in this chaotic, delirious avalanche of images, are at the heart of this exhibition. They are features of our contemporary digitized condition that inevitably invite critical scrutiny (much of which takes the shape of art – an art that seeks to impose order, or otherwise reveal the hidden order of things), yet at the same time also act as sources of authentic wonder to which art may respond by duplicating this spectacle of visual overload, by adding to it even. This deep, irresolvable ambiguity – a seamless reflection of the ambivalence of the image proper – is a defining characteristic of the exhibition, and of much of the work included in it, and of course serves to remind us of the ironies implied in all uses of the term 'order'. It is an irony that is also present in the awareness that, no matter how sincere and profound contemporary art's indignant criticism of the society of spectacle may seem (and effectively be), art – and art's desire to see everything and show everything – also irrefutably belongs to this very regime of spectacularization.

Two types of profusion, then, are at work in this exhibition. One pertains to the brute fact of the visual abundance characteristic of contemporary society proper – the realization of the world's overwhelming visual riches, and the mirror effect it creates in any art that seeks to respond to this relative wealth by replicating it. Here we find the rationale for the exhibition's own character of visual overload – the sheer quantity of work on display that consists, precisely, of picturing (or imaging/imagining) quantity. Secondly, there is also the fact of the fundamental heterogeneity of the visual abundance that characterizes the image-world – hence also the heterogeneity of artistic responses to this fact: not only is it an art of visual plenty, it is also one of irreducible differences and differentiations. To grasp the baffling variety of artistic attitudes, methods and practices that are at play in this labyrinthine exhibition – a reflection in itself of the labyrinthine nature of the world as such, and one that must by its very definition remain incomplete – a number of organizational principles that symbolize or reflect these varying attitudes, methods and practices have been isolated, such as "appropriation", "archives", "collage & bricolage," and "typology".

As is clear from these enumerations and taxonomies, photography will be the dominant medium in the exhibition; it is the technical innovation of photography and of the ideally limitless reproducibility of its images, theorized to such epochal effect by Walter Benjamin, that has transformed our experience of the world into an overwhelmingly visual one. Furthermore, photography has also contributed decisively to the democracy of imagery that is implied in the exhibition's conceptual make-up: as a project, The Order of Things would be entirely unthinkable without the democratization of image production that was ushered in by the popularization of photography, beginning with the introduction of cheap cameras and film at the beginning of the twentieth century, all the way up to the advent of digital photography and the Internet as everyman's image bank.