Short exhibitions by artists and others. Running alongside the Main Galleries, The Front Room operates at a different rhythm, with exhibitions lasting anywhere from one day to a few weeks. These reactive, nimble, provisional, and experimental exhibitions test the boundaries of conventional programming and echo the elasticity of contemporary culture. The first appointment is with Reena Spaulings. Curated by Laura Fried and Anthony Huberman. 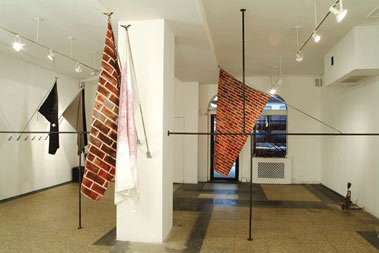 The Contemporary Art Museum St. Louis is pleased to announce a new season of The Front Room. Running alongside the Main Galleries, The Front Room operates at a different rhythm, with exhibitions lasting anywhere from one day to a few weeks. These reactive, nimble, provisional, and experimental exhibitions test the boundaries of conventional programming and echo the elasticity of contemporary culture.

Reena Spaulings emerged in 2004 as the protagonist of a book authored by the artist-group Bernadette Corporation. Simultaneously an art gallery located in New York's Lower East Side and an artist making paintings, flags, postcards, films, CDs, and installations, Reena Spaulings presents itself/herself in a variety of shifting guises: a story, a gallerist, an artist, a place, and a collective, always in an attempt to blur the distinction between identities. Reena Spaulings opens the Fall 2008 season of The Front Room with new and recent work.

Born in 1974 in Bigoraj, Poland. Lives and works in Warsaw and New York Wojciech Gilewicz works with architecture and painting. Working from photographic studies taken in urban environments, he paints hyper-realistic abstract images: sections of building facades, rusty metal grates, stained concrete slabs, and flagstones. He then places the painted replicas directly on top of the original site in the city street, merging the illusion of a painting with the reality of a building. For his Front Room exhibition, Gillewicz presents a series of recent paintings along with a video showing their near-secret installation in an urban setting.

Born in 1977 in Paris. Lives and works in New York With witty sleights-of-hand, Chihcheng Peng manipulates pre-existing video footage to explore the slippages and ruptures of the routine. His works have reexamined Buster Keaton's "Sherlock Jr.," the industrial films of the Prelinger Archives, and amateur footage of San Francisco. In the spirit of his work, Peng appears, disappears, and re-appears in The Front Room, as he presents his video Shadow Your Man (2007) one day each week throughout the month.

Wieser was born in 1973 in Freilassing, Germany and lives and works in Berlin; Falkowski was born in 1973 and lives and works in Chicago; Lassry was born in 1977 in Tel-Aviv and lives and works in Los Angeles Claudia Wieser's faded environments and geometric compositions are rooted in German Romanticism, Russian Suprematism, and German Expressionist film "la-Caligari", and take the form of collages on found photographs or photocopied wallpaper installations. Andrew Falkowski's wry and melancholic paintings of photographic backdrops present absent portraits, missing still-lives, and lost historical prerogatives. Elad Lassry's photographs and films continue a collapse of background into foreground but also make use of photographic conventions and histories. Each in his and her own way, Falkowski, Lassry, and Wieser self-reflexively consider the layered process of picture-making.

Born in 1974 in Bad Homburg, Germany. Lives and works in Berlin Gregor Hildebrandt's pictures, installations, and objects draw from music, film, literature, and art history. Using the magnetic tape from audio and video cassettes, he glues hundreds of strips together to create his Tonbilder "sound pictures" that allude to Hildegard Knef, Wilhelm Furtwangler, The Cure, and other music sources. In small sketches, large format canvasses, or the covering of an entire surface of a building's facade, Hildebrandt's Tonbilder transform audio recordings into a visual experience.

Born in 1962 in Egypt. Lives and works in Sydney A magical bricolage of cast consumer products and recovered refuse make up Hany Armanious's personal cosmology. In a world weighed down by artifice, the artist pursues a "pure" state of materials with installations of Goodwill wares and the remains of past rituals. His materials could include mud, bubbles, worms, sandpaper, manila folders, pool cues, and hot melt.

Born in 1970 in Asti, Italy. Lives and works in Asti and Milan Following the history of twentieth century Italian art-making, Futurism Arte Povera, Transavanguardia, Diego Perrone draws from a rich catalogue of cultural references to muse upon states of existence and the creative process. In a one-day continuous screening, The Front Room showcases his 2005 animation Totò Nudo, featuring Perrone's hypotheses on the demise of both a dog and a popular 1950s Italian entertainer in a snowy wood.

Gibson was born in 1978 in London and lives and works in London. Waterman was born in Portsmouth, Virginia in 1975 and lives and works in New York While participating in the Whitney's Independent Study Program in New York in 2008, Beatrice Gibson, a British artist interested in music and social sculpture, invited composer Alex Waterman to collaborate on a film. Both share an interest in the sonic manifestations of visual and social phenomena, and their collaborative film, A Necessary Music, explores the musical properties of life and social identity on New York's Roosevelt Island. This one-night screening and musical event also includes Gibson's "video-orchestra" of London taxi drivers, as they recite an abstract path through endless city streets. The screening begins at 6:00 pm.

Born in 1964 in Newcastle, Australia. Lives and works in New York Ian Burns's kinetic dioramas have engaged with subjects as diverse as the war in Iraq, TV culture, colonialism, and art history. Using primitive electronics, household objects, and other assorted junk, Burns creates convoluted mechanisms that produce a simple moving image on a screen, either by live video feed to a monitor, or as a shadow-play. Elaborate and darkly humorous, Burns's works directly to explore how images are constructed and how they are consumed.

Born in 1938 in Appenzell, Switzerland. Lives and works in St. Gallen, Switzerland Roman Signer's artworks are often only appreciated or experienced after-the-fact. His documentation of countless staged explosions and small acts of destruction reveal his so-called "action sculptures," performed by the artist himself in the remote Swiss countryside near his home. The Front Room presents a compilation of these short videos over the course of a weekend.

Founded in Paris in 2004 Named after a common brand of French stationary, Claire Fontaine is a "ready-made artist," exemplifying an empty, standardized identity produced by contemporary capitalism. Her works include neon signs, sculptures, videos, light-boxes, and texts, and while her message is often militant and radical, she more closely resembles subjectivity-on-strike, compromising our ability to define it and institutionalize it. The title of her exhibition in The Front Room is "They Hate Us for Our Freedom" and includes a new sculpture, a wall text made with the burnt remains of lit matches, and a poster of Jackson and Dave, Dick Cheney's two dogs. "They hate us for our freedom" is a seminal sentence of George Bush's speech after September 11 and states an ideological and economical distance with the eastern world supposed to justify the wars to come. Claire Fontaine's exhibition raises the question of the meaning of freedom in liberal societies, and discretely shows the violence and the lack of independence that comes from the simple fact of being governed.

THE CONTEMPORARY ART MUSEUM ST. LOUIS
With a vision of presenting the most relevant and experimental developments in contemporary art and developing successful community partnerships, education programs and outreach initiatives, the Contemporary makes the arts available to wide and diverse audiences throughout the St. Louis metropolitan area. Founded as the Forum for Contemporary Art in 1980, the Contemporary Art Museum St. Louis re-opened with a new 25,000 square-foot building in 2003.