For a language to come

Provoking Change in Japanese Postwar Photography. On display are vintage editions of some 35 rare Japanese photobooks from the late 1950s to the early 1990s and complete page by page media presentations of selected titles. Among the authors: Nobuyoshi Araki, Masahiso Fukase, Eikoh Hosoe, Yasuhiro Ishimoto, Kenji Kanesaka, Kikuji Kawada, and others. 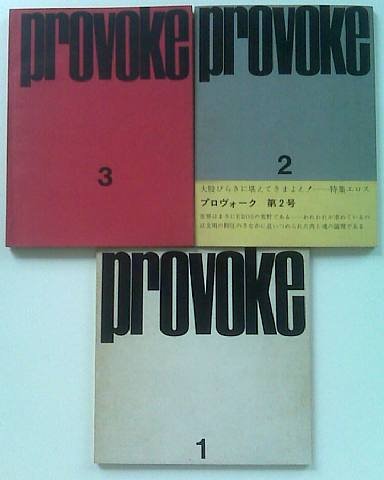 Carolina Nitsch is pleased to present FOR A LANGUAGE TO COME – Provoking Change in Japanese Postwar Photography at Carolina Nitsch Project Room in Chelsea. This exhibition of photographers and their seminal books in postwar Japan surveys a highpoint in the history of photography books. On display are vintage editions of some 35 rare Japanese photobooks from the late 1950s to the early 1990s and complete page by page media presentations of selected titles.

In no other country have photographers created so many publications and numerous Japanese photographers continue to prefer books as the ultimate presentation for their projects. Many photographers featured in this show were at the forefront of a postwar cultural movement in Japan. At its core was the iconoclastic magazine Provoke (1968-69), which had a vital influence in inventing and pushing for a new radical aesthetic. Its manifesto stated to discard the world of certainty and to create images that provoke new language and ideas.

Highlights include the first major postwar photobook Japan’s, Yasuhiro Ishimoto’s “Someday, Somewhere” (1958), featuring both a tendency to abstraction and formalism known from the Callahan-Siskind era, and a very distinct austerity of its own.

Shomei Tomatsu’s “Nagasaki – 11.02” (1966) is one of the most significant tributes to a defining event in the country’s 20th century and an important step towards Japan’s outstanding photographic expression, featuring haunting images and close-ups of damaged objects such as a watch stopped at 11.02 or the picture of a melted beer bottle.

Two other compelling and towering books of the early sixties are “Killed by Roses” by Eikoh Hosei (1963, re-edited as “Ordeal by Roses” in 1971) and “The Map” by Kikuzi Kawada (1965). Designed by the influential designers Sugiura and Yokoo, the first is a remarkable collaboration between Hosoe and the writer Yukio Mishima, and offers a deeply disturbing look at a powerful if warped mind. “The Map” is the ultimate photobook-as-object, combining refined book design with hard-hitting photography reflecting on Japan’s recent history, particularly its complicated relationship with the United States, which occupied and governed the country from 1945-1952 and held Okinawa until 1972.

“Bye bye Photography” by Daido Moriyama (1972) is the most radical document of the Provoke era, and as Martin Parr and Garry Badger state “the most extreme photobook ever published”. Moriyama pushes both the photographic sequence and the photograph itself to the limits of legibility with a brilliant imagery from his own pictures. Sharing the gritty, intuitive and existentialist approach of Moriyama, his friend Takuma Nakahira – the lead political voice for the Provoke group – revels in “For A Language to Come” (1970) in the signature, unabashed “bad” photography which defined the whole Provoke movement.

Other important postwar photography movements or publications presented in this exhibition include VIVO (founded 1959 by Hosoe, Kawada, Tomatsu a.o.) and later Geribara 5 (1971-72), with Yoshio Takase’s “Toilet” and “Young Ladies in Bathing Suits” by young photographers including Araki, who shared a conceptual style and similar tastes for farce and irony. Camp was a gallery for young photographers founded by Moriyama in 1980, whose first show featured Keizo Kitajima’s “Tokyo” project. A periodical that stood out was Workshop (1974-76, 8 vol.), which also ran a leading private photography school with teachers such as Tomatsu, Moriyama, Hosoe, Fukasa, Araki and others.

“Ravens” by Masahisa Fukase (1986) – combining the intensely personal with the metaphorical – is widely recognized as the post-Provoke masterpiece of Japanese photobooks. The after Provoke era is dominated by the prolific Nobuyoshi Araki, who despite criticism remains a powerful force with well over 300 books published to date. His first book “A Sentimental Journey” (brought out privately in 1971) is still considered one of his best, perfectly stating his aesthetic position as what he calls the “I Novel”. “Tokyo Lucky Hole” (1983-85) is one of Araki’s best known and most controversial books. Documenting sex clubs of Shinjuku, Araki’s view is that of the voracious, non-stop clicking photographer.

With his diametrically different austere, precise and elegant vision and design Hiroshi Sugimoto rivals Araki’s international reputation. Always creating carefully conceived and executed series of works, Sugimoto’s books further explore and expand Japanese traditions and their complex design matches among others Hosoe’s books of the sixties. In the seascapes of Time Exposed (1991) Sugimoto records a primal scene that has remained unchanged since man first appeared on the planet, in “Sea of Buddha” (1997), a leporello depicting images of 1000 bodhisattva statues from Kyoto, he is combining modernity and tradition. Together with “Theatres” (2000) Sugimoto’s books reflect a vision and consistency that puts them among the most accomplished photobooks ever published.