An exploration of the ecology of the artistic imaginationm, Made Up - the title of this fifth edition of the event - includes narrative, fantasy, myths, lies, prophesies, subversion, spectacle, and the ambiguous territory between the real and unreal. It is a reaction to the pervasive documentary focus of much contemporary art, highlighting the emotional charge within artistic imagination and our fascination with and need for making things up. Consisting of around 40 new projects by leading and emerging international artists the show will be presented across multiple venues. 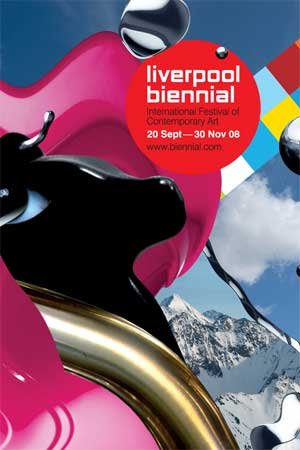 Celebrating the tenth anniversary of its foundation by James Moores, the fifth edition of Liverpool Biennial will be even more impressive in scale and ambition than its predecessors, and a key event in Liverpool’s year as European Capital of Culture 2008.

MADE UP is the title of the 2008 Biennial’s International exhibition, an exploration of the ecology of the artistic imagination. MADE UP will include narrative, fantasy, myths, lies, prophesies, subversion, spectacle, and the ambiguous territory between the real and unreal. It is a reaction to the pervasive documentary focus of much contemporary art, highlighting the emotional charge within artistic imagination and our fascination with and need for ‘making things up’.

Liverpool’s cumulative experience of curating exhibitions by commissioning ambitious and challenging new artworks by leading international artists for gallery and public spaces enables it to realise exhibitions of a scale and ambition not to be found elsewhere in the UK. This has made Liverpool Biennial an example to others worldwide and a magnet to art lovers and professionals.

Consisting of around 40 new projects by leading and emerging international artists – principally new commissions alongside a few works previously unseen in the UK - MADE UP will be presented across multiple venues: Tate Liverpool, the Bluecoat, FACT (Foundation for Art & Creative Technology) and Open Eye, with half the exhibition sited in public spaces across the city. The curators for MADE UP are drawn from each of the partner venues and led by Liverpool Biennial Artistic Director, Lewis Biggs.

Liverpool Biennial continues to place an emphasis on commissioning new work from leading and emerging international artists. Artists commissioned for MADE UP include:

Other lead programmes in the 2008 Liverpool Biennial festival will be:

John Moores 25 Exhibition of Contemporary Painting: celebrating its 50th year as the UK's most prestigious national open painting competition. Organised by National Museums Liverpool and supported by John Moores Liverpool Exhibition Trust and A Foundation, the exhibition has been hosted by the Walker Art Gallery since 1957. Celebrating the vitality of contemporary British painting, it is open to artists living and working in the UK and in 2008 offers a first prize of £25,000. The jurors are art critic and curator Sacha Craddock, artists Jake and Dinos Chapman, Graham Crowley, and Paul Morrison.

Bloomberg New Contemporaries 2008: the annual exhibition by students and recent graduates of Fine Art colleges throughout the UK; selected this year by artists Richard Billington, Ceal Floyer and Ken Lum. Established in 1949, New Contemporaries is recognised for supporting new work and artists at the start of their professional careers.

1 in 3 of the commissioned artists have represented their country at the Venice Biennale.

Established in 1998, Liverpool Biennial is the UK’s largest and most widely reviewed festival of contemporary visual art, and contributed significantly to the award of the title European Capital of Culture 2008 to the city of Liverpool. It is a major player in the cultural economy: the 2006 festival received 400,000 visitors, 50% travelling from outside the Merseyside region and created an additional £13.5m spend in the city. The 2004 festival won the Northwest regional title Best Tourism Event and was runner up (to The London Eye) for the accolade Best Tourism Experience in the national Enjoy England Awards for Excellence organised by Visit Britain.