The artist presents a new body of work that explores how the narratives of art history are constructed and by whom. The Two Planets series comprises film and photographic work recording the responses of Thai farmers to well-known western art masterpieces. 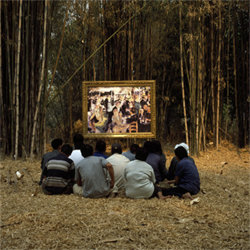 For her second exhibition at Gimpel Fils, Araya Rasdjarmrearnsook will present a new body of work that explores how the narratives of art history are constructed and by whom. The Two Planets series (2007-2008) comprises film and photographic work recording the responses of Thai farmers to well-known western art masterpieces. Rasdjarmrearnsook's project was inspired by her work as a tutor at Chiang Mai University. During seminars she became aware of the fact that many students were faltering when asked to criticize 'great art works'. For Rasdjarmrearnsook, the students' hesitancy and doubt stemmed from the realisation that the works were already recognised as great, and they were unsure of how to react. At the same time, Rasdjarmrearnsook moved from the city of Chiang Mai to its rural suburb. Her daily scenery changed from the urban cityscape to agricultural scenes of bean fields and sometimes rice paddy, according to harvesting seasons.

The Two Planets series unifies two worlds, that of art history and that of rural Thailand. Sitting before life-size reproductions of works such as Édouard Manet's Le Dejeuner sur l'herbe farmers and gardeners who do not know the financial or cultural value and history of the artworks speak about them with a freedom not available to Rasdjarmrearnsook's students. The recorded conversations involve guesses and presumptions about what is in front of them, questioning what the protagonists are doing and why. In order to talk about Manet's risqué picnic, the farmers bring humour and use slang to replace words that, in Thai culture, should not be spoken between men and women.

Rasdjarmrearnsook's film and photographic works raise issues regarding the current debate over interpretation or experience: can we have a full appreciation of an artwork even if we don't have all the information and history about it? To what extent does an over abundance of information and interpretation blind us to the pleasure of looking at an artwork and using our imaginations?