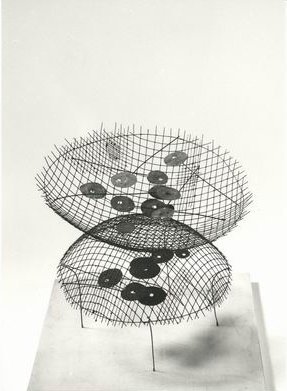 Within the avant-guarde tradition, which favored the dramatic and emphatic aspects of a work, and postmodern art which either rivaled the spectacle or protected it from mass consumerism with a strong sense of the anti-aesthetic, a type of substantially different artwork emerged since the 1960´s. Extremely heterogeneous in form and matter, it puts into play deliberately “aesthetic” forms, that is, sensitive concepts such as light, absense or fleetingnness. Lines are also very heterogeneous in these works, which may be ascribed to poor art, minimalism or geometric abstract art. However, very meticulous manual work is involved using materials which, though organic and of little value, are highly expressive and which, to a certain extent contradict their origin through the beauty they come to represent The works are comprised of the light and delicate manipulation of materials which are worked in an extrememly complex manner. In some cases direct intervention is required by the artist in order for a work to be installed. Light, air, threads and wires, pencil and paper are elements that constitute a world in which grace, irony and lightness prevail over gravity.

The creators of these works, as if they were the antithesis of the romantics, have focussed their eye on the slight rather than the voluminous, the frail in contrast to the strong, the tentative in contrast to the rotund. These are works which do not startle but provoke another kind of surprise, a kina of vertigo when faced with the diminutive or barely existent, They oblige us as spectators to open our eyes and lend our attention in order to recapture the almost nothingness which these artists have created.

The twelve artists selected, of which two are Spanish, form an evocative panorama of contemporary art. Born over a long timeline, from the 1920s to the 1960s, they all share a common spirit. The majority of those from abroad have not previously exhibted in Spain or have done so on few occasions, making this an opportunity to become acquainted with them through a careful selection of their work. In addition, three artists, Andy Goldsworthy, Rei Naito and Ignasi Aballí will display works specially created for this exhibition.