Ours: Democracy in the Age of Branding

The exhibition takes as its inspiration the "war of ideas" that the U.S. launched as part of its war on terrorism: the campaign to disseminate democracy abroad. An international roster of emerging and established contemporary artists explores what this brand means through a number of newly commissioned works, performances and other events. Central to the exhibition programming is a series of design charrettes where participating artists will work with students from The New School to address a number of the issues raised by the works on view. 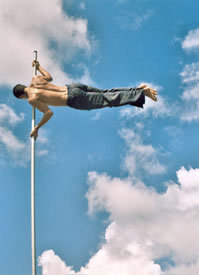 Parsons The New School for Design will present a timely exhibition exploring the potency of democracy as a global brand in Ours: Democracy in the Age of Branding. On view October 16, 2008 through February 1, 2009, the exhibition inaugurates the first fall season at The Sheila C. Johnson Design Center, Parsons' new venue for art and design programming. The exhibition is curated by Carin Kuoni, the director of the Vera List Center for Art and Politics at The New School, and features work by an international roster of emerging and established contemporary artists including Yael Bartana, Paul Chan, Aleksandra Domanovic, Liam Gillick, and Judi Werthein. It includes an online component, curated by Rhizome Curator-at-Large Marisa Olson, and a series of programs co-presented by Parsons and the Vera List Center.

"The Sheila C. Johnson Design Center was conceived as a place where art and design would inspire dialogue on some of the most important issues of our times—reflecting the broader philosophy of The New School," said Parsons Dean Tim Marshall. "With the upcoming elections, we felt it was important to address some of the political, economic, social and cultural issues that go hand in hand with democracy in this day and age. The interactive nature of this exhibition will engage both our students and the general public in this dialogue."

Ours: Democracy in the Age of Branding examines the desires generated and promoted by democracy as a brand—such as choice, participation, freedom of expression, a sense of belonging, and the promise of individual success, all embodied in the notion of "liberty"—and looks at how and where these desires find fulfillment or are displaced. The exhibition also investigates both aesthetic and political systems of representation developed in response to these desires, as well as those power structures that run parallel to a democratic government.

"When the United States began its war on terrorism, it also announced a 'war of ideas', a campaign to disseminate American values of democracy overseas," said exhibition curator Carin Kuoni. "This exhibition explores what this global brand stands for and how it is interpreted both here and abroad. It investigates both the illusion and the promise of democracy."

Acknowledging the recent convergence of design and art, the exhibition brings together artists in this hybrid field who employ a range of media—from video to photography, performance, sculpture and installation. All these works are anchored and grounded by a site-specific installation by the British artist Liam Gillick consisting of an expansive platform with four circular benches, which occupies a central space in the gallery. It serves as a stage for participatory gatherings, performances, lectures, a student lounge, and the set for a series of charrettes (solution-driven workshops) led by many of the participating artists.

The exhibition includes an online component curated by new media artist and Rhizome Curator-at-Large Marisa Olson and accessible in the gallery and remotely. Works on view capture the energy of the Internet as a new frontier of the democratic process, and question whether traditional forms of democratic expression are as valid as new participatory communities. Among the participating artists are Joseph DeLappe, Aleksandra Domanovic, I Approve This Message, Institute for Infinitely Small Things, Steve Lambert, Les Liens Invisibles, Ligorano/Reese, Michael Mandiberg, Emery Martin, Carlos Motta, PETLab, and Wooloo Productions.

Related Programming
A central element of the exhibition is the series of charrettes taking place within the Gillick installation, where New School students are asked to engage one another on a series of topics. Each one is moderated by an artist in the exhibition in collaboration with a faculty member, and activates a work in the show. The goal of these charrettes is to come up with solutions to some of the issues explored in the exhibition, which will then be presented at an evening presentation for the general public. Among the artists leading these charettes is Miguel Luciano, whose installation piece, Cuando las Gallinas Mean (When Hens Pee), considers self-censorship and self-imposed silence. Luciano asks participants to submit statements expressing opinions, secrets, and beliefs they would not dare express publicly, which will then be transformed into prizes that take the form of desirable merchandise such as buttons, pins, temporary tattoos, and stickers. Other participating artists include Bhagat, Durant, Hunt, Lagomarsino, Pagien, and Werthein. A full list of charrettes and other related programs is accessible at http://www.newschool.edu/johnsondesigncenter.

About Parsons The New School for Design
Parsons The New School for Design is one of the most prestigious and comprehensive institutions of art and design in the world. Located in New York City, Parsons prepares students to creatively and critically address the complex conditions of contemporary global society. Combining rigorous craft with cutting-edge theory and research methods, Parsons encourages collaborative and individual approaches that cut across a wide array of disciplines. For more information, please visit http://www.parsons.newschool.edu.