"The modernist utopian project to reshape the ways in which we live and inhabit society, exemplified by the architectural promises laid out by social housing projects, world fairs and official houses of culture, is now generally agreed to have failed." Organized by Tim Saltarelli. 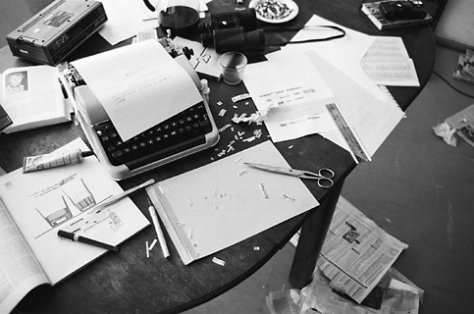 In the lead up to November's American general election, the use of the word 'change' has been popular with both of the major political parties. In order to help establish their respective candidate's willingness and ability to bring about reform, it has been employed to such an extent that it has become nearly devoid of meaning. But once the new President has been chosen, perhaps through the democratic process of voting, will the election have served as the catalyst for this kind of massive change, whatever it might be? Whether or not ‘change’ ends up as simply a rhetorical flourish, the event of the election would seem to present a platform to reconsider the dynamic between politics and art production, and the affinity between strategies of refusal and art, as well as the ways in which art might be able to contribute to efforts of revolutionizing society.

When operating through covert channels, could specific works of art, by forming a distinction between the representations, depictions (that which is made visible) and the [political] content which serves as their basis, simultaneously challenge the, now seemingly shaky, dominance of capitalism while also resisting established modes and discourses through which the 'political' makes itself manifest in art? Is there a way to do so without resorting to the didacticism of much of the art deemed 'political'? How do we find new ways to say 'no,' to form a suggestion for an alternative, both politically and artistically?

The modernist utopian project to reshape the ways in which we live and inhabit society, exemplified by the architectural promises laid out by social housing projects, world fairs and official houses of culture, is now generally agreed to have failed. The student strikes of the 1960s, as well as other traditional forms of struggle, instead of establishing a profound and lasting engagement with social issues, served instead to buttress the existing system, to further advance the development of capitalist democracies by focusing on individual rights and freedoms and free market economies. Present day protest politics and activism are of questionable efficacy, their strategies even being appropriated by corporate marketing. So, in the waning moments of our current political regime, might we instead engage in strategies of negation and refusal, articulating a call for change that goes beyond pointing out specific sources of conflict? And might we, consequently, allow for works of art to resonate in different ways than being literal, that are not, always, immediately, accessible?

In doing so, in serving as a disruption, art then has the potential to act as a catalyst for the kind of change that rises from the ground up and stretches across well established societal divisions. This it can do in ways that perhaps address anarchism, terrorism and vandalism, but that could promote a process that perpetuates itself; in much the same way as the October Revolution spawned similar revolutions, socially and creatively.

Andreas Bunte was born in Mettmann, Germany in 1970 and lives and works in Berlin, Germany. His work was recently included in the exhibition Wessen Geschichte, curated by Yilmaz Dziewior at the Kunstverein Hamburg, Germany and in October he will be in Time Perspectives at the Martin-Gropius-Bau in Berlin. He has had solo exhibitions at Open Space, Art Cologne, Cologne, Germany; Galerie Ben Kaufmann, Berlin, Germany; and in 2009 he will have a solo exhibition at the Bielefelder Kunstverein, Bielefeld, Germany.

Duncan Campbell was born in Dublin, Ireland in 1972 and lives and works in Glasgow, Scotland. He has exhibited at the Tate Britain, London, England; the Frankfurter Kunstverein, Frankfurt am Main, Germany; and Manifesta 5, the European Biennial of Contemporary Art in San Sebastian, Spain. Along with an upcoming solo show at the Institute of Contemporary Art (ICA), London, England, he was recently the recipient of the Baloise Art Prize at Art 39 Basel.

Thea Djordjadze was born in Tiflis, Georgia in 1971 and lives and works in Cologne, Germany. She recently exhibited in When Things Cast No Shadow, the 5th Berlin Biennale, Berlin, Germany; and also the 2007 Biennale d'art Contemporain de Lyon, Lyon, France. In the past two years, she has had solo shows at Sprüth Magers, Cologne, Germany; Kunstverein Nürnberg, Nuremberg, Germany; Galerie Micky Schubert, Berlin, Germany; and Studio Voltaire, London, England.

Matias Faldbakken was born in Hobro, Denmark in 1973 and lives and works in Oslo, Norway. In addition to being the author of the novels The Cocka Hola Company and Macht und Rebel which have their own cult following, he has had solo exhibitions at Standard (Oslo), Oslo, Norway; Simon Lee, London, England; and Midway Contemporary, Minneapolis, MN. He has participated in the Biennial of Sydney, Sydney, Australia on two occasions, including the current edition; represented Norway at the 51st Venice Biennale, Venice, Italy; and exhibited at The Modern Institute, Glasgow, Scotland; the Institute of Contemporary Arts (ICA), London; Gagosian Gallery, New York, NY; P.S. 1, Long Island City, NY; Kunst-Werke, Berlin, Germany; and in Down by Law, curated by The Wrong Gallery as part of the 2006 Whitney Biennial.

Luca Frei was born in Lugano, Switzerland in 1976 and lives and works in Lund, Sweden. In 2007, Bookworks published his book The so-called utopia of the centre beaubourg: An interpretation by Luca Frei. He has had solo exhibitions at the Lunds Konsthall, Lund, Sweden; Studio Dabbeni, Lugano; Elastic Gallery, Malmö, Sweden; and the Grazer Kunstverein, Graz, Austria. He was recently in Democracy in America presented by Creative Time at the Park Avenue Armory, New York, NY and was also included in the Glasgow International 08, Glasgow, Scotland; the 3rd Prague Biennial, Prague, Czech Republic; the 9th Istanbul Biennale, Istanbul, Turkey; and group exhibitions at Lisson Gallery, London, England; and the Stedelijk Museum Amsterdam, The Netherlands.

Cyprien Gaillard was born in Paris, France in 1980 where he lives and works. He has upcoming solo shows at the Museum Fridericianum, Kassel, Germany; the Hayward Gallery Project Space, London, England; and has previously had solo shows at Centre Georges Pompidou, Paris, France; and L’Atelier du Jeu de Paume, Paris. He is presently in the exhibition Degrees of Remove: Landscape and Affect at Sculpture Center, New York; and Occupancy by More Than 6'682'685'387 Persons is Dangerous and Unlawful - Part One, at Cosmic Galerie, Paris, an exhibition by Pierre Bismuth in collaboration with Matias Faldbakken and Claire Fontaine, among others. He has also participated in numerous group shows including the 5th Berlin Biennale, Berlin, Germany; The Collection One at the Museum Boijmans van Beuningen, Rotterdam, The Netherlands; and the 2007 Biennale d'art Contemporain de Lyon, Lyon, France.

Pia Rönicke was born in Roskilde, Denmark in 1974 and lives and works in Copenhagen, Denmark. Her exhibition An Usual Story from a Nameless Country with the Kurdish writer Zeynel Abidin Kızılyaprak is presently at gb agency, Paris, France; and in the past she has had solo exhibitions at Croy Nielsen, Berlin, Germany; Lunds Konsthall, Lund, Sweden; and Andersen_s Contemporary Art, Copenhagen. She has also exhibited her work at Participant Inc, New York, NY; Lisson Gallery, London, England; Palais de Tokyo, Paris; Artists Space, New York; and Manifesta 4, the European Biennial of Contemporary Art, Frankfurter Kunstverein, Frankfurt, Germany.

Pia Rönicke's films will be screened from October 23 – October 26, from 1-6 pm, at Dispatch, 127 Henry Street, New York, NY 10002
Matthew Higgs will read from Luca Frei's The so-called utopia of the centre beaubourg: An interpretation on Saturday, November 22 at 4pm at Elizabeth Dee.