Never-Part. Histories of Palestine. On the occasion of Masarat Palestine, this original exhibition tells the story of a narrator who draws inspiration from works inseparable from their authors, each of whom is a Palestinian artist. Crossing Surda (A Record Of Going to And From Work) - 2002 is an installation by Emily Jacir: since March 2001, checkpoints have blocked the road between Ramallah and Birzeit, making access to the university and around thirty Palestinian villages difficult. The artist wanted to pass through this barrier and thus bear witness to the absurdity of the situation... 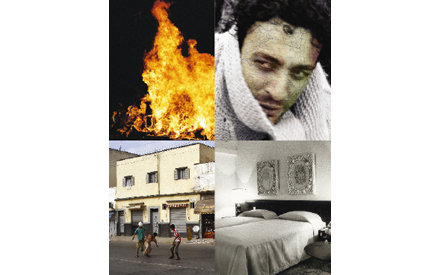 Jerusalem, the mid-1950s - Amoz grows up on one side of no man's land. In his parents' flat he maps out military strategies to protect the Jewish people. In his social environment he is hardly ever, if at all, confronted with an Arab. Sari grows up on the other side, at a distance of less than a hundred metres. His parents are hardly aware of the Holocaust. They have been driven away by the Israeli army. The families of Amoz Oz and Sari Nusseibeh lived next to each other, absorbed in their own tragedies. Nusseibeh: “Is it not the inability to imagine what the life of the 'other' is like that is at the heart of the Israeli-Palestinian conflict?”

The Palestine Festival, which is to be held at the Centre for Fine Arts, will be presenting for more than two months a variety of cultural events which will give visitors the opportunity to discover the many facets of contemporary Palestinian arts. This initiative is being organized in close cooperation with the Masarat Festival at the Halles de Schaerbeek within the context of the first edition of the Brussels Biennial event which is aiming to promote a wide range of projects from different institutions in joint partnership.

A Palestine festival is the perfect opportunity for BOZAR to cast a glance over the wall with
* Two high quality exhibitions: one about the future of occupied architecture, another one in which Palestinian artists present a precious work of art.
* A multidisciplinary festival revolving around different aspects of Palestinian arts today. The multimedia presentation Al Kamandjati tells the story of violinist Ramzi Aburedwan who as a child witnessed his best friend being shot and killed. The American Palestinian Tarek Halaby dances behind a wall. Short documentary fi lms fl ash the viewer to everyday life in the Palestinian territories. Theatre actor Rudi Meulemans brings the widows of murdered PLO
leaders on stage. And Sari Nusseibeh comes and explains that, despite everything that has happened, he clings to an indestructible hope. Or like his father always used to say: “Rubble often makes the best building material.”

On the occasion of Masarat Palestine, this original exhibition tells the story of a narrator who draws inspiration from works inseparable from their authors, each of whom is a Palestinian artist. They form a part of their experience of life and, over time, crystallise the essence of lives lived. A way to capture the intimate side of the torments of a nation in shreds. A respectful look at a diaspora and a dream of a dispossessed people.

Since March 2001, checkpoints have blocked the road between Ramallah and Birzeit, making access to the university and around thirty Palestinian villages difficult. In December 2002, camera in hand, Emily Jacir wanted to pass through this barrier and thus bear witness to the absurdity of the situation. After the Israeli army confiscated her video cassette, she resumed her mission, but this time with her camera in her bag.