William McKeown presents some 50 works, comprising a carefully considered selection of abstract paintings, a series of watercolours on paper and a collection of coloured pencil drawings of flowers and plants. The exhibition features a number of new works, completed just weeks before the opening. In Praise of Shadows focuses on shadows, shadow theatre and silhouettes, based on old and contemporary folk tales and simple narratives, it explores the traditional art form of shadow plays and their influence on the world of contemporary art in recent years. The exhibition brings together key works by eight contemporary artists from seven different countries and two master filmmakers. 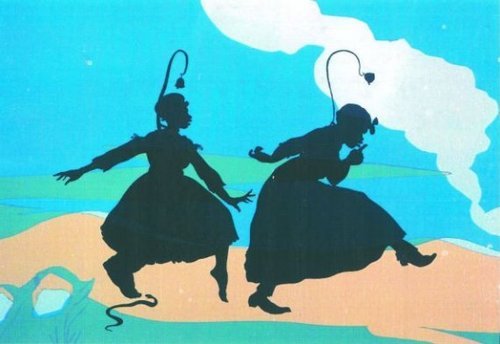 An exhibition of paintings, watercolours and drawings by William McKeown, one of Ireland’s most highly regarded artists, opens to the public at the Irish Museum of Modern Art on Wednesday 5 November 2008. The most ambitious display of the artist’s work to date, William McKeown presents some 50 works, comprising a carefully considered selection of abstract paintings, a series of watercolours on paper and a collection of coloured pencil drawings of flowers and plants. The exhibition features a number of new works, completed just weeks before the opening.

William McKeown is best known for his luminous, near abstract, paintings that explore states of mind, such as happiness and freedom, and qualities of nature, like light, air and sky. His paintings, in oil on linen, have highly finished surfaces achieved through meticulously applied thin washes of paint. With their refined sense of colour and subtle tonal gradations, they capture the essence of a certain time and place. Titles, such as the Hope Painting (The Light Inside), 2006, and In the Field (Turning Buttercups), 2008, typically point to memories, emotions or ideals. In his catalogue essay, the exhibition’s curator, IMMA Director Enrique Juncosa, describes McKeown’s paintings as ultimately representational and autobiographical, comprising “archetypal spaces filled with light, which are a metaphor for specific moments.” In them “he is not only trying to relive [these moments], but also offer them to the viewer.”

McKeown’s watercolours, which are also predominantly monochrome in style, are represented in the exhibition by Waiting for the Corncrake, 2008. This series of 30 works – one for each day of the month – harks back to the artist’s childhood on his family’s farm, where his father waited patiently for the first calls heralding the arrival of the corncrake and cuckoo, noting down the dates and comparing them with previous years. The series also points to the present-day plight of the corncrake, once synonymous with the Irish countryside and now an endangered species.

Simultaneously, McKeown has developed a series of botanical drawings. In Wild Poppy #1, 2001, and Primrose #2, 2003, we are presented with detailed translucent images, almost invisible on a white background, encapsulating both the seasons of the year and the flora of the artist’s native County Tyrone. Despite their simplicity, these works – like McKeown’s paintings – also exude a palpable feeling of light and warmth. Enrique Juncosa sees McKeown as offering his work like a “view through a window…. And in this open window, he succeeds in externalising and objectifying his themes. The viewer must do the same, leaving himself behind to meet the artist in this ambiguous, beautiful and luminous space.”

William McKeown was born in 1962. He studied at Central St Martins School of Art and Design, London; Glasgow School of Art, Glasgow, and the University of Ulster, Belfast. Recent solo shows include the Golden Thread Gallery, Belfast, 2004; Project Arts Centre, Dublin, 2004; Douglas Hyde Gallery, Dublin, 2004; Ormeau Baths Gallery, Belfast, 2002, and the Kerlin Gallery, Dublin, 2006. McKeown has participated in numerous group exhibitions and was Northern Ireland’s representative at the 51st Venice Biennale in 2005. His work is included in many private collections in Europe and he was short-listed for the IMMA Glen Dimplex Artists Award in 1997.

The exhibition is curated in close collaboration with the artist. McKeown’s response to the environment and architecture at the Museum is an integral part of the project, as it is in all aspects of his practice.

William McKeown is supported by Farrow & Ball, manufacturers of quality wallpapers and paints, one of whose paints – Pavilion Grey – is being used in the galleries to create the feeling of a space within a space. The exhibition is also supported by the British Council Northern Ireland.

Artist’s Lecture
On Tuesday 9 December at 7.00pm, William McKeown will present IMMA’s Annual Winter Lecture, in The Chapel at IMMA. This will focus on the different aspects of his practice, more especially as they relate to his exhibition at IMMA. Admission is free, but booking is essential and can be made online at http://www.imma.ie or by phone on +353 1 612 9919.

A fully-illustrated colour catalogue, designed and produced by CHARTA in close collaboration with William McKeown and IMMA curators, accompanies the exhibition. This will include essays by Enrique Juncosa, Director, IMMA, Declan Long, art historian at the National College of Art and Design, Dublin, and London-based art historian and critic Corinna Lotz.

In Praise of Shadows

A major exhibition presenting some 90 works in the form of shadows, shadow theatres and silhouettes by eight leading contemporary artists opens to the public at the Irish Museum of Modern Art on Wednesday 5 November 2008. In Praise of Shadows is inspired by the long history of shadow theatre in Turkey and Greece and comprises works that are based on folk tales or simple contemporary narratives. These are being shown alongside films by two master filmmakers from the first half of the 20th -century. Through the work of such celebrated artists as William Kentridge, Jockum Nordström and Kara Walker, the exhibition explores the parallels between the traditions of shadow theatre and the new narrative spirit in contemporary art. It also reveals the influence which this traditional art form has had on the world of contemporary art in recent years.

At the heart of the exhibition is the shadow theatre tradition of Turkey and Greece and its main protagonist Karagöz (Karaghiozis in Greece), an ever-hungry trickster who lives through hundreds of adventures and misadventures along with a cast of other characters. The exhibition brings together key works by Haluk Akakçe, Nathalie Djurberg, William Kentridge, Katariina Lillqvist, Jockum Nordström, Christiana Soulou, Andrew Vickery and Kara Walker, selected for their specific affinities with that world. They range from free-standing model theatres, drawings and wall installations to films, photographs, texts and manuscripts relating to shadow theatre. Early silhouettes and stop motion (frame-by-frame) films by Lotte Reiniger and Ladislas Starewitch, pioneers of animated films from the first half of the 20th -entury, form an important part of the exhibition.

In Praise of Shadows includes a number of key works by the distinguished South African artist William Kentridge, among them his free-standing theatre and preparatory drawing for Preparing for the Flute, an abridged version of Mozart’s Magic Flute. Katariina Lillquist will present two films, The Country Doctor and the Maiden and the Soldier, and the puppets and props she handcrafted for the films. Both owe much to the practice of the Polish theatre director and artist Tadeusz Kantor; also an acknowledged influence on the work of William Kentridge.

The exhibition will feature drawings, silhouette installations, videos and paintings by the celebrated African American artist Kara Walker. Much of Walker’s work is closely related to the original traditions and techniques of shadow theatre, which she employs in her video animations and in real shadow plays to explore issues of race, gender and sexuality, as in …calling to me from the angry surface of some grey and threatening sea. I was transported, 2007. In addition, a 2004 collaborative video by Walker and William Kentridge is being shown for the first time.

The work of the pioneering German filmmaker, Lotte Reiniger, has a central place in the exhibition. In the early 1920s, Karagöz became a direct source of inspiration for Reiniger and her silhouette films became a two-way street between the traditions of shadow theatre and European high art. The exhibition will screen some of her best known works - Die Abenteuer des Prinzes Ahmed, Papageno, Carmen and A Night in the Harem. Related material, including the original silhouettes and storyboards, is also being shown. Likewise, Polish filmmaker, Ladislaw Starewitch, a master of 1920s and ’30s stop-motion animation, a technique used to make manipulated objects appear to move on their own, is represented with his original treatment of such traditional fireside stories as The Mascot, 1933 and Love in Black and White, 1923. Andrew Vickery, a British-born artist, and long time resident of Ireland, is showing his free-standing theatre – a contemporary Punch and Judy-like presentation, Do you know what you saw?, 2004 – from the IMMA Collection.

The name Karagöz is derived from the Turkish kara meaning black and göz meaning eye. The shadow theatre, of which he was the hero, dates back to at least the 16th-century in Turkey where it spread throughout the Ottoman Empire, finding particularly fertile ground in 19th-century Greece. In both countries it came to represent the voice of the disenfranchised and to act as a source of political critique. Over the years in Greece, a number of plays relating to a specific local context were introduced. At times, these stemmed directly from classical theatre, while others reflected current social and political situations - from the German and Italian occupation during the Second World War, to more contemporary political commentaries involving prime ministers and politicians in the 1970s. Only in the second half of the 20th -century have they become a vehicle for children’s theatre and for family-orientated narratives. Karagöz/Karaghiozis stories are still performed today by many puppeteers who have adapted his adventures to today’s public and to contemporary subjects.

The exhibition is curated by Paolo Colombo, formerly Curator at the MAXXI-Museo Nazionale delle Arti del XXI Secolo in Rome from 2001 to 2007, and Director of the Centre d’art contemporain in Geneva from 1989 to 2001. Following its opening in Dublin, the exhibition will travel to the Istanbul Museum of Modern Art and the Museum Benaki, Athens.

Discussion
On Tuesday 4 November at 5.00pm Paolo Colombo will discuss the curatorial ideas behind the exhibition with IMMA Director Enrique Juncosa. Admission is free, but booking is essential. Online bookings can be made on www.imma.ie or by telephone on +353 1 612 9919.

In Praise of Shadows is accompanied by a fully-illustrated catalogue designed and produced by CHARTA, with texts by the following authors: Metin And, Evamarie Blattner, Paolo Colombo, Lewis Hyde, Enrique Juncosa, William Kentridge, Carolina Lopez, Francois Martin and Lotte Reiniger.

FRAME, the Finnish Fund for Art Exchange, are sponsors of the exhibition. Presented with the support of the Culture Programme of the European Union.