The largest international show of contemporary art ever presented in the United States, showcasing the work of 75 artists from around the globe while establishing New Orleans as a major center for contemporary visual art exhibitions. Prospect.1 has been designed to help reinvigorate New Orleans following the human, civic, and economic devastation left by Katrina in 2005. The long-term primary goal of the biennial exhibition is to redefine the city as a cultural destination, where the visual arts are celebrated and can once again thrive. The project aspires to initiate a new category of cultural tourism for the city, on a scale normally seen during Mardi Gras and the city's celebrated Jazz-Fest. Organised by Dan Cameron. 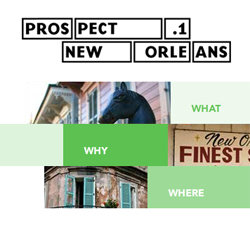 In early September, the entire world seemed to be transfixed by the gradual movement of Hurricane Gustav in the direction of New Orleans. The epic dimensions of the 2005 Katrina catastrophe, with its attendant proportioning of failure and blame, was very much on people’s minds as they envisioned a second hurricane striking, and perhaps laying waste, to a city still struggling to regain its momentum and equilibrium.

Fortunately, that didn’t happen, and while this news is itself a source of great consolation, the aftermath of Gustav’s relatively minor sideswipe remains to be measured. I arrived back in New Orleans – I didn’t evacuate, since I was in New York at the time – last Thursday morning (September 4), and was immediately struck by what this city looks and feels like post-evacuation. There was evident relief and even jubilation in seeing old friends, and in celebrating the news we had once again dodged a bullet, and that New Orleans would live to party another day.

But all is not good cheer and frivolity in New Orleans. Much of the city remained without electric power through the weekend; contradictory messages from public officials have left far-flung residents uncertain about when they should return; a strictly enforced curfew is in place (French Quarter establishments hasd to close their doors by 2 a.m.); and those parts of the city that have not fully recovered (i.e., the Lower 9th Ward) were left more isolated than ever.

Hanging over New Orleans is a feeling of displaced trauma. It appears to me that the courageous and passionate citizenry of this city, in their collective and individual struggles to pull themselves out of the muck and mire of three years ago, also tried to put Katrina behind them. The desire to forget, or at least set aside for a while, the nightmare of suffering and destruction from three years ago, seems to have won out, at least until Gustav roared into the Gulf of Mexico. Today the people of New Orleans are jittery, and a bit glum, as they face the first tangible evidence since Katrina of what a hurricane can do. The ubiquitous tree branches and broken glass are not just themselves – they are also symbols of the death-knell that hasn’t happened yet, but of which the people of New Orleans are justifiably terrified.

The good news, if I can call it that, is that everybody involved in Prospect.1 is fine, the biennial sites all seem to be relatively damage-free, and the only outdoor work that was already installed (Ghada Amer’s) made it through Gustav without a scratch. Installation of Prospect.1 begins today, as planned, and artists are steadily beginning to arrive. Tony Fitzpatrick is in town as of yesterday, Alexandre Arrechea arrives today, and Sebastian Preece will arrive tomorrow. The last two are producing pretty complicated works, so they’ll be with us for a while.

This is also the week when we publicly announce the Opening Weekend schedule, so that events become more official, and visitors who plan to be here October 30-November 2 will be able to plan their itineraries in greater detail.

I think that it’s important to frame the above bits of information in the context of everything that’s gone on here over the last week. It’s not simply that people have asked whether Prospect.1 will go forward, although they have. What concerns me the most is that it now feels more incumbent on us than ever before to follow through with Prospect.1. People here need a reason to celebrate their city beyond all the usual suspects, and people outside New Orleans need to feel that they can participate in the cultural rebuilding of the city, which we believe Prospect.1 will accomplish. I guess it’s a way of saying that Gustav has convinced me – if I was ever in doubt – that organizing Prospect.1 is the right thing to do.

It might be universally celebrated as the birthplace of jazz, but New Orleans is also where new international art first found an official footing in the U.S. From its inception in 1887 - Claude Monet was among the early exhibitors -- through 1914, when Italy and France sent their official artistic representatives for the last time, the Annual Exhibition of the Art Association of New Orleans functioned as America’s most sophisticated ongoing survey of new international art. Because of its romantic history and unparalleled architecture, New Orleans has always attracted visual artists in the same way that it has attracted musicians, writers and chefs. Both history and architecture combine to make New Orleans the ideal city for an international biennial.


Why a biennial for New Orleans?

Since the post-Katrina floods of 2005, the international art community has expressed a collective desire to make a positive contribution to the city and people of New Orleans. But these intentions have been hampered so far by the sense that there is no suitable public vehicle for channeling this interest in a positive way. In showcasing the city through contemporary art installations, Prospect.1 New Orleans seeks to base an entirely new category of tourism for the city on the growing American interest in contemporary art, as well as the worldwide love for New Orleans.


Why should I visit Prospect.1 New Orleans?

In recent years, Americans in increasing numbers have become captivated by contemporary art. From insular cottage industry to multi-billion-dollar marketplace, the contemporary art world has developed an unmistakable appeal to people who ten years ago may never have given it much thought. Until now, however, there has never been a large-scale biennial of contemporary art in the U.S., and as a result, most people have only the Internet, local museums and travel as ways to experience new art. Prospect.1 New Orleans will offer an exhibition on a scale that has never been attempted before in the U.S. For that reason alone, anyone interested in new art should find a visit to Prospect.1 New Orleans indispensable.
Another important reason to visit Prospect.1 New Orleans is that New Orleans’ economy runs on tourism. For every night you stay in a hotel, every meal you eat, and every musician you hear performing in a local club, you contribute directly to the rebuilding of New Orleans.

Prospect.1 New Orleans will be the largest international exhibition of contemporary art ever presented in the United States, showcasing the work
of 75 artists from around the globe while establishing New Orleans as a major center for contemporary visual art exhibitions.

About the revitalization of New Orleans:

Prospect.1 New Orleans has been designed to help reinvigorate New Orleans following the human, civic, and economic devastation left by Katrina in 2005. The long-term primary goal of the biennial exhibition is to redefine the city as a cultural destination, where the visual arts are celebrated and can once again thrive. Prospect.1 New Orleans aspires to initiate a new category of cultural tourism for the city, on a scale normally seen during Mardi Gras and the city’s celebrated Jazz-Fest.

With Prospect.1 New Orleans' policy of free admission, extended hours and daily guided tours, and through significant outreach efforts, it is projected that more than half the people visiting the exhibition will come from within the state of Louisiana. Within New Orleans, a full-time education coordinator will organize free bus transportation and age-appropriate docent guides to the exhibition for all public school children K-12. It is also anticipated that thousands of art lovers will visit New Orleans for the opening of Prospect.1 New Orleans, and thousands more to see the exhibition during its eleven-week run.

This exhibition has been made possible with the support of Prospect.1 New Orleans Founding Benefactor Toby Devan Lewis.

Leadership support for the exhibition has been provided by the Metabolic Studio, a direct charitable activity of the Annenberg Foundation under the direction of Artist and Trustee Lauren Bon; and the State of Louisiana, Office of the Lt. Governor, Department of Culture, Recreation, and Tourism; and W Hotels, Hospitality Sponsor.

Major exhibition support has been provided by Peter B. Lewis; The Getty Foundation; The Andy Warhol Foundation for the Visual Arts, Inc.; The Rockefeller Foundation; Mondriaan Foundation; Zemurray Foundation; Louise Blouin Media; A Diamond Is Forever; Starry Night Fund of the Tides Foundation; and Agnes Gund.

The education program has been made possible, in part, by the Ruth U. Fertel Foundation.


The Vernissage for Prospect.1 New Orleans will take place on October 30 and 31, with private viewings of all venues for VIPs and accredited press. An Opening Gala to help underwrite the costs of presenting Prospect.2 will take place on Halloween evening, Friday October 31, at Antoine’s Restaurant.