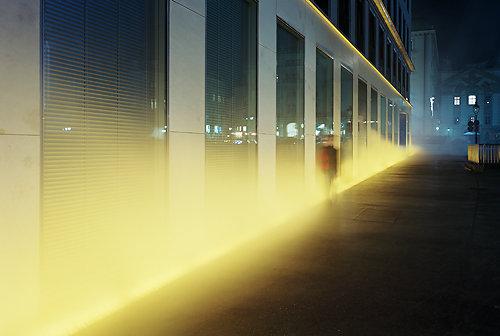 Curated by Gabriele Schor, Director of the Sammlung Verbund

"Double face" is a term for double sided fabrics, both sides of which can be used. The exhibition by the same name traces the play of the subject's transformation, the fanning out and fragmentation of identities.

Exhibition in cooperation with the European Month of Photography Vienna http://www.monatderfotografie.at

Curated by Gabriele Schor, Director of the Sammlung Verbund

The impressive work Yellow fog was first shown in New York in 1998. It is now presented as a permanent work of art in public space. The location for the intervention is the Verbund building and the historic plaza Am Hof, which at dusk turns into a public stage for an orchestration of light and fog.

32 fluorescent tubes are embedded in the pavement along the 48 meter façade of the Verbund headquarters, emitting a specific yellow light, attuned by the artist himself. Daily at dusk fog rises up the façade in yellow light at regular intervals, shrouding the building in an ephemeral veil for one hour.

The fog serves as a fleeting projection screen for the light. It not only obscures the view of space, but also creates a more precise experience of distance and spatial relations. Olafur Eliasson uses fog as a "tool", as an "instrument", to allow us a new perception of urban space, of the building's façade, of the pavement as well as the entire plaza ensemble. Thus the dialogue between urban space and the passers-by is redefined.

The atmospheric quality of a natural phenomenon is thwarted by its placement within an urban environment and the conscious display of its production. The visibility of the artwork's construction is an important aspect of Olafur Eliasson's work.

The perception of Yellow fog is affected by factors such as social components, movement, weather, environment and the recipients' position in public space. When Yellow fog is shown at dusk – the transition period between day and night – it represents and comments on the subtle changes in the day's rhythm.

Intervention in public space
Along the Verbund
headquarters' facade
Am Hof 6a, 1010 Vienna, Austria
Daily at dusk