Listen Darling... The World is Yours

Works from the Collection 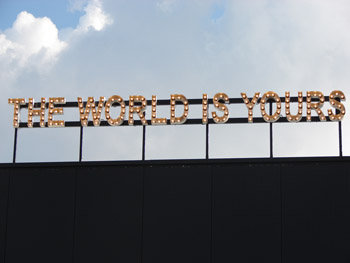 The Ellipse FOUNDATION Contemporary Art Collection is pleased to announce its new exhibition, Listen Darling… The World is Yours, a selection of works from the Collection, including hitherto unseen works and new acquisitions, by guest curator Lisa Phillips, Director of the New Museum, New York.

Listen Darling… The World is Yours brings together the work of over forty artists who together demonstrate the sweeping changes in the psycho-sexual dynamics of culture over the past thirty years. The exhibition, which revolves around several major works by Louise Bourgeois, Eija-Liisa Ahtila, and Shirin Neshat, among others, looks at how women see women, women see men, men see women and men see men, often through direct confrontation with sexuality and sexual politics. Listen Darling… reveals the strong infiltration of the woman's voice in the art and culture of our time, as well as gay artists whose sexual identity is a deliberate part of their artistic statement.

The holdings of the Ellipse Foundation are particularly rich in this area which represents one of the most significant developments in contemporary art and society in recent times, and one that will surely continue to define the future.

The Ellipse Foundation is located in Alcoitão, Cascais. Opening hours are Friday to Sunday from 11 am to 6 pm.

Ellipse Foundation Art Centre
Alameda das Fisgas, 79
2645-117 Alcoitão Cascais, Portugal
The Art Centre is open to the public on Fridays,
Saturdays and Sundays from 11am till 6pm