The exhibition is a part of "Between the Images" 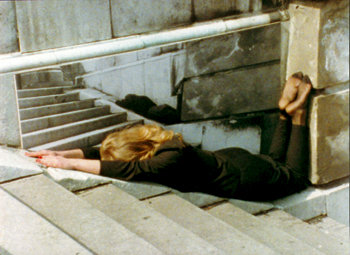 A front figure in contemporary art since the 1960s, the Austrian artist VALIE EXPORT has played a pioneering and vital role in the development of performance and feminism and activist strategies as well as conceptual photography and film. Index presents an introductory exhibition of VALIE EXPORT's work which focuses on strategies for self-definition and feminism, including a selection of her films and performative photography.

In 1970 the artist adopted a new artistic identity with the name VALIE EXPORT, always written in capital letters, as an act of self-definition, and thus pointing out an objective which pervades her oeuvre. "Action Pants: Genital Panic", (1969) defines an active femininity which acts both politically and sexually.

In one of her first films, "Selbstportrait mit Kopf" (1966) the artist's face merge together with but also detaches from the image of an expected femininity, here expressed in a classical sculpture of a woman's head. "Mann & Frau & Animal" (1970-73) is an act of sexual self-definition but then also a survey of the relation between image and representation, something that reappears throughout her artistic career, beautifully expressed for instance in her film "Syntagma" (1984). The feature film "Unsichtbare Gegner" (1976), screened at Cinemateket Stockholm in November, is a science fiction with inspiration from Don Siegel's "Invasion of the Body Snatchers" (1956) and at the same time a strong and humoristic showdown pointing at the woman's alienation in society. Several elements from "Unsichtbare Gegner" can also be found in the later work "Syntagma". VALIE EXPORT very early on recycled images and sequences from her own production into new works, an artistic strategy that ques tions the traditional idea of the image's authenticity.

VALIE EXPORT investigates the body as a membrane between society and identity, a membrane which is also image and sign and where the female body is inscribed into the structures of society. In "Body Sign Action" (1970) the artist tattoos a suspender on her thigh, an image of female submission and seduction. Through appropriation and renegotiation of a generally accepted image of femininity and sexuality, "Body Sign Action" proposes a different and more active definition. VALIE EXPORT has from the very early works used the image of herself in her production, for example in large numbers of performance works and in photography which through the usage of her own body also is based on performative actions. The point of departure is related to a subjective position but in spite of the fact that the artist often uses her own body, she avoids referring to her personal history.

In the exhibition a selection from her extensive production of performative photography is included: "Körperkonfiguration" (1982), in which the body is inscribed in the architecture of the city.

VALIE EXPORT has consistently continued to link artistic and political strategies to structural examinations of the image as language and of the relationship between image and representation. There is an unbroken conceptual line from the early works, like "Mann & Frau & Animal", to one of her more recent works: "I turn over the pictures of my voice in my head" (2008), a video using a performance during the Venice biennial opening 2007 as a starting point. In the performance the artist reads a text while her vocal cords are being filmed.

VALIE EXPORT has during her artistic career also been active as a writer and curator. Together with Silvia Eiblmayr she is curating the Austrian pavilion at the Venice biennial 2009.

Thanks to Galerie Charim and Sixpack Film, Vienna, Iaspis and the Austrian Embassy, Stockholm.

Included in the programme of "Between The Images". http://www.xposeptember.se