Italian Modernism from Segantini to Balla 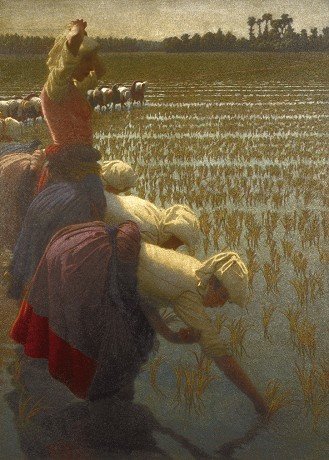 From 26 September 2008 until 11 January 2009, the Kunsthaus Zürich will offer Switzerland’s first ever comprehensive overview of Divisionism, the most significant movement in Italian painting in the late 19th century. These masterpieces of colour and light testify to a world in upheaval – from idyllic landscapes and the blessings of modern technology, to the hard lot of the farmer and a burgeoning proletariat.

ITALY’S ANSWER TO FRENCH IMPRESSIONISM
Like Georges Seurat and Paul Signac of the French Neo-Impressionists, Giovanni Segantini is emblematic of Divisionism, a master of colour, luminescent power and brilliance. The Divisionists were Italy’s answer to the Pointillists, who were in turn the Parisian successors to the Impressionists. Adherents of Divisionism analysed colour and light, and Segantini and his contemporaries ushered in classical modernism in Italy, applying colour theory and the principles of optics to the work of painting. Their dots and brushstrokes often rendered in complementary, contrasting primary colours, the Divisionists created dazzling compositions flooded with light. Among the first generation of Divisionist painters were Giovanni Segantini, Giuseppe Pellizza da Volpedo and Gaetano Previati, who were to become its chief proponents. Their successors in the second generation, Giacomo Balla, Carlo Carrà and Umberto Boccioni, turned later in their careers to Futurism.

A POLITICALLY PROGRESSIVE MODE OF EXPRESSION
While the French Post-Impressionists created an idyllic imaginary world, the Divisionists used their paintings to express a range of progressive socio-political views, as exemplified by some of the 60 works on show. The exhibition also features paintings with natural motifs, such as Umberto Boccioni’s ‘Lombard Landscape’ (1908), and treatments of symbolist topics like ‘The Sound of the Brook’ (1902) by Emilio Longoni. Angelo Morbelli’s ‘Christmas Among the Forgotten’ (1903), meanwhile, presents the viewer with the bare interior of a shelter for the homeless and the lonely souls within, yearning for warmth, sustenance and affection. Giacomo Balla’s ‘Farmer’ (1903) seems unable to live in comfort by the sweat of his brow, in an era in which the rural population was increasingly seeking work and refuge in the cities. And yet, in those cities as well, hard by the achievements of modern technology, as exemplified in Giacomo Balla’s celestially glistening ‘Streetlamp’ (1909), a starving class was on the rise too: the proletariat. The twin faces of the industrial revolution, as recognized by the artists of the period, are everywhere in evidence at the Kunsthaus Zürich: from Emilio Longoni’s 1894 painting ‘Social Contrasts’ to Segantini’s idyllic ‘Midday in the Alps’ (1891).

AN EXHIBITION FEATURING SWISS ARTISTS
Divisionism also plays a role in Swiss art history, with painters mainly from the southern part of the country, such as Edoardo Berta, Filippo Franzoni and Giovanni Giacometti, adopting the stylistic vocabulary of their Italian counterparts. Their works are distributed throughout the exhibition in rooms devoted to Landscape, Symbolism, Social Issues, Rural Utopia and Forward into Futurism. Works on loan from Italian museums as well as from the Musée d’Orsay in Paris or New York’s Museum of Modern Art are joined by a dozen rarely shown pieces from private collections. An audioguide, included in the price of admission, and a film made in Milan in 2008 inform visitors about Divisionist painting technique, provide biographical data on individual artists, and sketch in the background to the creation of a whole series of paintings. Guided tours are available in German, French and Italian.

Swiss Painters among the Divisionists