The Confucius Code. Included in this exhibition is a selection of oil paintings done by the Chinese artist, whose creative vocabulary often derives from old photographs, magazine illustrations and private photograph albums that he has found or exchanged at flea markets. 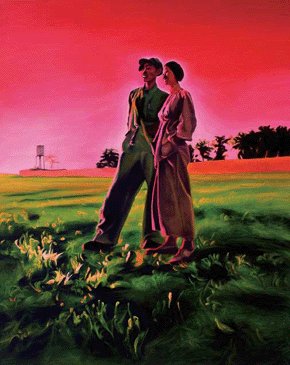 Anna Ning Fine Art is proud to present the first exhibition in Hong Kong of paintings by the Chinese artist Jing Kewen. History and memory are like prisms. They do not give us a panoramic view of the real world. Rather, they allow the richness and polymorphism of experiences in the past to be reflected when viewed from different angles. Memory does not become art until it is translated into a proper artistic language. This process, however, requires considerable effort on the part of the artist. His personal effort is in fact one of reconstructing cultural memory.

Included in this exhibition is a selection of oil paintings done by the Chinese artist Jing Kewen (b. 1965) between 1990 and 2008. Jing's artistic vocabulary often derives from old photographs, magazine illustrations and private photograph albums that he has found or exchanged at flea markets. In transforming memory to art, he depicts from an individual viewpoint the stylistic representation of cultural memories – the glories and dreams of "Red China" as preserved in his memory and imagination.

His paintings are often depictions of simple, plain buildings, breezy and sunny weather, beautiful sunshine on grass, magnolia blossoms swaying in the wind, young men and women with glamorous faces, beams of sunlight highlighting their figures and clothes. In Jing's art, history and memory are presented as being pure, bright and poetical as they were once imagined. The artist is not trying to purify his memories; rather, he bearing witness to the collective memories of his generation.

"The best time" may only exist in "their" time, and the stories might only be sensational and soul-stirring in the past. Even cruel and painful moments would be "blossoming ones" when looked back at over a long period of time. Jing's paintings are not just representations of social change since the old days, but also visualizations of the vicissitudes of life. The artist's concern with the lives of individuals against the background of reality may evoke in the viewer a sense of nostalgia, melancholy and even expectation.