Crossing the boundaries to art from Felicien Rops to the present. Appx. 50 artists 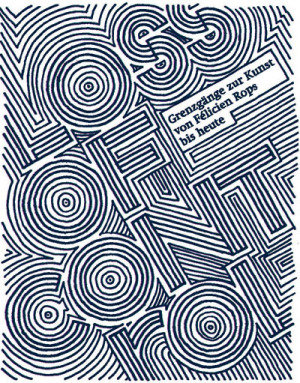 With his last major exhibition, LOSS OF CONTROL, JAN HOET bids farewell after eight years as an inspiring founding director of the MARTa Herford.

"This strange predilection for confusing the flesh, this urge for ribaldry for the sake of ribaldry, this fire that occurs only in the soul without the body investigated participating in the process, this vapid and limited urge that, in the final analysis, is only very distantly related to the procreation instinct remains strangely mysterious when one thinks about it. Cerebral erethism, lasciviousness of the brain, says science and when this condition lasts, becomes worse and causes certain disturbances in the organism it talks about "mental hysteria" and recommends soothing agents: lupulin, camphor, bromide, potassium and showers. […]. In the field of art one expects this mental hysteria or this fractious pleasure to be reflected in work that banishes the images that it has itself called forth."
Written by famous French author and critic Joris-Karl Huysmans on Félicien Rops, two years before the latter's death in 1898.

One of the great "secret" subjects of the art of the 19th century is called into question in Jan Hoet’s valedictory exhibition LOSS OF CONTROL and updated right up until the present day – the permanent exchange between art and life, between madness and genius, between death and sexuality. Since the 19th century artists' work has consisted of attempting to express the paradises of their imagination and the hell of their inner obsessions. Is Félicien Rops’ Pornocrates (1878) – an heroically proud and only scantily clad woman being led by a pig – not a congenial expression of the male obsessions of the late 19th-century?

Superb works on loan from the Musée Félicien Rops in Namur, the Musée royaux des Beaux Arts de Belgique, the Collection Musée Royal de Mariemont, Morlanwelz, the Bibliothčque Royale de Belgique and from other private collections offer insights into thematic pictorial contexts enlarging the collective decadent mentality of the bourgeoisie towards the end of the 19th century as if through a magnifying glass and transcending it aesthetically.

However, at the center of Jan Hoet’s last major exhibitions is not only an exhibition with a selection from all the important periods in the creative work of Félicien Rops, that contemporary of James Ensor; the exhibition also boasts the close involvement of contemporary Belgian artist Jacques Charlier. There are all kinds of different connections to be found between Rops and Charlier, a type of common ground somewhere between past and present times: the caricaturing view of world, the way they "stage" women, their daring and the pleasure they take in shocking but also their ability to profoundly encourage people to engage in intimate self-observation.

Artists such as Louise Bourgeois, Hans Bellmer, Jean Dubuffet, Tracey Moffatt, Francis Picabia, Bjarne Melgaard, and Yue Minjun have been placed in dialogue with the great Belgian symbolist as have a string of others engaged in artistic activity, people who live and work on the boundaries between art and extreme psychic conditions, their work designated as Outsider Art. LOSS OF CONTROL is flanked by other independent pictorial worlds in which the historical tension between art and psychiatry is revealed: the famous photo-documentation of the hysterical female patients of psychiatrist Jean Martin Charcot, selected works from the Prinzhorn Collection and the ART EN MARGE Collection, Brussels along with works by artists associated with Art Brut.

On the first floor Marco den Breems presents a room-filling installation that subverts the pretensions of Western avant-garde art and is completely suffused with a kind of magic "put into practice" that is inspired by Africa.