This presentation of works from the Museum's collection exemplifies the vast range of artistic practices during this time of profound transition, bringing together a diverse group of artists working in a variety of media. Ranging from the meditative to the exuberant and from the elegiac to the surreal, the works in this new instance of the "Notations" series convey the anxieties and expectations associated with the turbulence of the recent past and invite reflection on the resonances between art and history-in-the-making. Curated by Carlos Basualdo and Adelina Vlas. 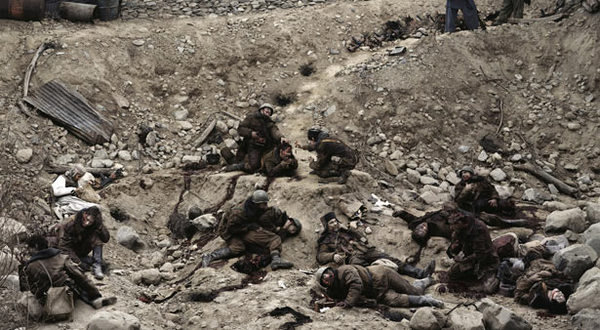 The Philadelphia Museum of Art continues its commitment to presenting stimulating contemporary art with Notations: The Closing Decade a presentation that includes the work of thirteen artists from around the world made in the closing years of the 20th century. Taking the fall of the Berlin Wall in 1989 as a starting point, and leading up to the traumatic events of September 2001, the exhibition highlights the range of artistic pursuit during this period of profound global and societal transformation. It includes painting, sculpture, and video from the Museum's collection complemented by a small number of loans.

The thirteen works on view vary dramatically in scale, medium and mood - from the meditative to the exuberant and from the elegiac to the surreal - reflecting both the anxieties and the expectations that marked the end of a millennium through the lens of leading international artists including Francis Alÿs, Gabriel Orozco, Peter Doig, Sherrie Levine, Glenn Ligon and Jeff Wall.

Cuban-born artist Félix González-Torres (1957-1996) was inspired by the street lights of Little Italy in New York when he began creating his string-of-lights sculptures of which Untitled (Petit Palais) of 1992 was the first. A simple string of ordinary light bulbs that could be installed in multiple ways, the work rejects the monumental and heroic in favor of a quietly personal approach. At the time of its making, González-Torres had recently suffered the death of his longtime companion to AIDS, and the work suggests a wide range of meanings, reflecting both the light's capacity for revelation and transcendence and its inevitable dimming over time.

Artist Glenn Ligon's work has explored the ways in which language and culture inform personal identity, frequently using excerpts from texts by African American writers such as James Baldwin, Zora Neale Hurston, and Ralph Ellison. In his 1992 work, Untitled (I'm Turning Into a Specter before Your Very Eyes and I'm Going to Haunt You), Ligon quotes French writer Jean Genêt's 1959 play The Blacks (Les Nègres) in block print that moves down the canvas in a repetitive pattern. The words themselves gradually become illegible as the paint grows thicker – playfully underlining the literal meaning of the words, even as they seem to disappear.

Canadian artist Jeff Wall's large-format work Dead Troops Talk. A Vision After an Ambush of a Red Army Patrol, near Moquor, Afghanistan, Winter 1986, made in 1992, was clearly inspired by contemporary world events. A powerfully graphic image of the damage wrought by war, this 7 x 21 ft. color transparency was created by digitally combining various photographs the artist had staged in his studio. In this scene, Wall has taken an overtly theatrical and surreal approach to constructing the image, portraying the 1980s conflict between Russia and Afghanistan in the manner reminiscent of nineteenth-century depictions of war by artists such as Francisco Goya. Soldiers who have just been killed in battle are resurrected and engage with each other in what the artist describes as a macabre "dialogue of the dead".

The monumentality of Wall's image is countered by the fragility of Gabriel Orozco's meditation on death Black Kites of 1997. Orozco's bleached human skull is traversed by a lead pencil chessboard design that imposes a labyrinthine pattern on the organic surface of the skull, including the eye sockets. The artist described his sculpture as a drawing in three dimensions.

By contrast Polly Apfelbaum's Big Bubbles, 2001, bursts with color and texture. The spiraling, rug-like floor sculpture, consisting of over 1,000 pieces of cut and dyed synthetic velvet and measuring roughly 18 feet in diameter, is a recent addition to the Museum's collection. Big Bubbles probes the nature of painting taken off the wall and echoes the spirit of the poured latex works by artist Linda Benglis.

"Many of these works will resonate with viewers in a particularly poignant fashion, given the freshness of the historical events in question," Curator of Contemporary Art Carlos Basualdo said. "The exhibition is an opportunity to explore the ways in which a diverse group of artists were responding to a period of great turbulence, but also to consider the relationship between art and history-in-the-making."

About 'Notations'
The Closing Decade is the sixth in an ongoing series of gallery installations titled "Notations," inaugurated in 2006 and named after the 1968 book by American composer, writer, and visual artist John Cage—widely celebrated for his experimental approach to the arts. Cage's Notations was an international and interdisciplinary anthology of musical scores by avant-garde musicians that also embraced contributions from visual artists and writers. At the same time Notations was an exhibition in book form, in which the scores doubled as drawings. "Notations" at the Philadelphia Museum of Art is a flexible tool used to explore aspects of contemporary art in the Museum's expanding collection. The series of rotating projects is presented in the Gisela and Dennis Alter Gallery (176).

The Philadelphia Museum of Art is among the largest museums in the United States, with more than 200 galleries showcasing over 2000 years of exceptional human creativity in painting, sculpture, works on paper, photography, decorative arts, textiles, and architectural settings from Asia, Europe, Latin America, and the United States. An exciting new addition is the renovated and expanded Perelman Building, which opened its doors in September 2007 with five new exhibition spaces, a soaring skylit galleria, and a café overlooking a landscaped terrace. The Museum offers a wide variety of enriching activities, including programs for children and families, lectures, concerts and films.

For additional information, contact the Marketing and Public Relations Department of the Philadelphia Museum of Art at (215) 684-7860. pressroom@philamuseum.org

The Philadelphia Museum of Art is located on the Benjamin Franklin Parkway at 26th Street Philadelphia, PA 19130