Vik Muniz is the ninth participant in Artist's Choice, a series of exhibitions in which an artist serves as curator, selecting works from MoMA's collection to create an exhibition. To organize his exhibition, Muniz uses a rebus that combines unrelated visual and linguistic elements. The rebus features approximately 80 works of sculpture, photography, painting, prints, drawings, video, and design objects. "Measuring Your Own Grave" is a mid-career survey of the work of the acclaimed painter Marlene Dumas; the exhibition includes approximately 70 paintings and 35 drawings, and several large series of works on paper. 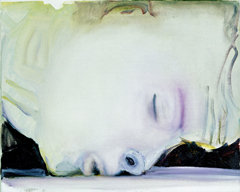 Vik Muniz (Brazilian, b. 1961) is the ninth participant in Artist’s Choice, a series of exhibitions in which an artist serves as curator, selecting works from MoMA’s collection to create an exhibition. To organize his Artist’s Choice exhibition, Muniz uses a rebus—a puzzle that combines unrelated visual and linguistic elements to create a larger deductive meaning—as the exhibition’s organizing principle. Artist’s Choice: Vik Muniz, Rebus features approximately 80 works of sculpture, photography, painting, prints, drawings, video, and design objects, selected and installed by Muniz. Among the artists and designers whose work will be on view are Eugène Atget, John Baldessari, Marcel Duchamp, Nan Goldin, Gordon Matta-Clark, Pablo Picasso, Dieter Rams, and Rachel Whiteread. The exhibition is organized by Vik Muniz, with Eva Respini, Assistant Curator, Department of Photography, The Museum of Modern Art. The exhibition will be on view from December 14, 2008, through February 23, 2009, in the Special Exhibitions Gallery on the third floor.

In organizing the exhibition, Muniz borrows from the linear, reduced structure of a rebus, taking works out of their normal museological classification and context, and inviting the viewer to forge intuitive connections between the objects, based on form, color, scale, quantity, function, and pattern. The resulting narrative sequence creates surprising juxtapositions, forming a unique presentation of the Museum’s collection.

Muniz states: “Rebus encourages viewers to think about the connection between one object and the next and is an exercise in the awareness of the power and function of serial visual analogy. This exhibition is a cognitive visual ride that I hope will affect how viewers experience the art here and throughout the Museum.”
Eva Respini adds: “In his work and life, Vik Muniz always questions the perception and order of things. MoMA invited him to organize this exhibition because of his creativity and voracious curiosity about the visual and material world. Like the artist himself, Rebus is intelligent and humorous, and provokes visitors to look at MoMA’s collection in new ways.”

Outside the entrance to the exhibition, Peter Fischli (Swiss, b. 1952) and David Weiss’s (Swiss, b. 1946) video The Way Things Go (1987) plays on a continuous loop. Shot in a warehouse, the video is an absurdist feat of cause and effect relationships, featuring automobile tires, garbage bags, and plastic water jugs, rolling, twisting, and exploding in an unbroken sequence of events, injecting a burst of humor at Rebus’s start.

Within the gallery, the “rebus” sequence begins, absent of wall labels (although an accompanying map guides visitors through the exhibition). Just as mortar joins the bricks of a building, the space and time between works placed in a gallery is as important to the exhibition as the art itself. As a viewer moves through a sequential arrangement of the exhibition, the residual ideas and forms of each artwork linger and have a cumulative effect.
In one part of the sequence from Rebus, Gordon Matta-Clark’s (American, 1945-1978) Bronx Floors (1972-73), a 42 x 43 3/8 x 11 3/8” remnant of wood and linoleum torn from a house in the Bronx, is displayed next to Joel Sternfeld’s (American, b. 1944) photograph Buckingham, Pennsylvania (August, 1978). The works are thematically connected through the series of newly built suburban homes in the background of Sternfeld’s image and the toy trucks on a mound of dirt in the foreground of the picture. The sequence continues with three related sets of toys from MoMA’s Department of Architecture and Design: Ladislav Sutnar’s (American, b. Czech Republic, 1897-1976) prototypes Build the Town Building Blocks (1940-43), LEGO building bricks (1954- 58), and a Rubik’s cube (1974). Subsequently, Alberto Giacometti’s (Swiss, 1901-1966) Hands Holding the Void (Invisible Object) (1934, cast c. 1954-55) bookends the sequence, with the sculpture’s hands formed into a cube-like shape, referencing the Rubik’s cube that precedes it. Moving further into Rebus, Muniz presents Massimo Vignelli’s (Italian, b. 1931) New York Subway Map (1970), displayed next to Philip-Lorca diCorcia’s (American, b. 1953) Igor (1987), a photograph of a man riding the New York City subway, with the iconic map in the image’s background. The orange subway seats in diCorcia’s photograph connect to the next work in the sequence, Yellow (1951) by Ellsworth Kelly (American, b. 1923). Finally, Kiki Smith’s (American, b. Germany, b. 1954) glass sculpture of an egg, Yolk (1999), follows and references Kelly’s Yellow in a similar way, beginning a new set of possibilities for Rebus.

In his own work, Muniz inventively questions the function and traditions of visual representation by using unlikely materials to render the subjects in his photographs. The Museum of Modern Art owns several of Muniz’s works, including Still, After Cindy Sherman (2000), from Muniz’s series Picture of Ink, Mass (1997), from his series Pictures of Chocolate, and Narcissus, after Caravaggio (2005), from his series Pictures of Junk. The recently acquired work Still, After Cindy Sherman, calls attention to the materiality of the printed medium. The artist rendered a blown-up image of one of Cindy Sherman’s most iconic works, Untitled Film Still #48 (1979) (which is also in MoMA’s collection), in black ink and photographed it while still wet. The result is a tension between the recognizable image and the photographed ink.

Vik Muniz was born in Sao Paulo, Brazil in 1961. He currently lives and works in New York City and Brazil. Muniz has exhibited internationally, including one-person exhibitions at the Miami Art Museum, which traveled to P.S.1 Contemporary Art Center, Long Island City; Moscow House of Photography; Museu de Arte Moderna, Rio de Janeiro, Brazil; Irish Museum of Contemporary Art, Dublin; Whitney Museum of American Art, New York; and the Menil Collection, Houston. His work is in the collection of numerous museums including The Museum of Modern Art, New York; The Metropolitan Museum of Art, New York; The Whitney Museum of American Art; The Solomon R. Guggenheim Museum; The Art Institute of Chicago; The Centre George Pompidou, Paris; and the Centro Cultural Reina Sofia, Madrid. Muniz is also the author of Reflex: A Vik Muniz Primer, published by Aperture in 2005.

Marlene Dumas: Measuring Your Own Grave

This mid-career survey of the work of the acclaimed painter Marlene Dumas (South African, b. 1953) is the first of its scale to be presented in the United States. The exhibition will include approximately 70 paintings and 35 drawings, including several large series of works on paper, and will provide a comprehensive examination of the work of one of the most thought-provoking and fascinating artists working today. The exhibition opens with Dumas’s earliest mature works from the late 1970s. While loosely chronological, it will also reflect Dumas’s tendency to work in series, with key paintings grouped together. Through her focus on the human figure, Dumas merges themes of race, sexuality, and social identity with personal experience and art historical antecedents to create a unique perspective on important and controversial issues of the day. The exhibition will provide an opportunity to trace these themes over the course of the artist’s career, and will provide access to paintings and drawings of extraordinary technical quality that are as much about their artistic creation as they are about the figures they depict.

Connie Butler joined MoMA in 2006 as The Robert Lehman Foundation Chief Curator of Drawings. Prior to MoMA, she was Curator at the Museum of Contemporary Art (MOCA) in Los Angeles from 1996 to 2005. For MoMA she has organized Glossolalia: Languages of Drawing (2008), and the upcoming Pipe, Glass, and Bottle of Rum: The Art of Appropriation, opening in July, and Here is Every: Four Decades of Contemporary Art, opening in September.