The Inexplicable Lightness of a Material. The display shows how the heavy material became light, idiosyncratic, and subversive. The exhibition is limited to this one material as a specific medium of artistic production to highlight the different paradigms of contemporary sculpture in their historical quality and diversity. In this context, the title of the exhibition refers not only to metal as a material, but also, in a figurative sense, to the deliberate disturbance of the observer's world. Participating artists: Giovanni Anselmo, Joseph Beuys, Candice Breitz, Anthony Caro, Cesar, John Chamberlain, Lygia Clark, Constant, Richard Deacon, Wang Du, Marcel Duchamp, Olafur Elisasson and many others. 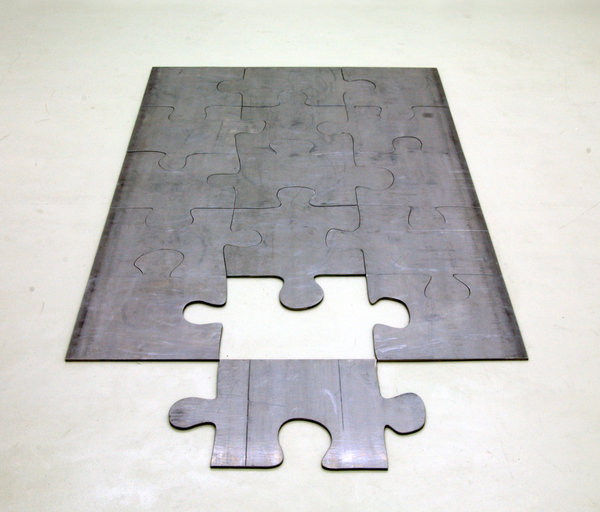 “Heavy Metal. The inexplicable Lightness of a Material" – This comprehensive exhibition at the Kunsthalle zu Kiel, opening December 7, is an homage to the gravity of sculpture and its creative suspension. The show consists of fifty-eight key positions connected by their material: “heavy" metal. The director of the Kunsthalle, Dr. Dirk Luckow, successfully invited international large-scale sculptures into his museum – artistic heavyweights will be gathered in the seemingly fragile 20th-century building. A stainless steel mirror by Indian sculptor Anish Kapoor, 2.65m in diameter, weighing 800kg; the famous textile sculpture “Soft Version of the Maquette for a Monument by Pablo Picasso" (1969) by Claes Oldenburg from the Centre Pompidou; a aluminium sculpture by Robert Morris (USA) from the Musée d’art moderne Saint-Etienne; Richard Serra’s “Sign Board Prop" (1969); the “Sky Car" by Geoffrey Hendricks – each of these works of art represents its own challenge to a museum, no less than the 500kg bronze “Top 10 profiles of the urban male" (2007) by Chinese artist Wang Du reproduced on the invitation and the exhibition poster.

THE CONCEPT: AVANT-GARDE IN METAL
The works of art, mostly shown without pedestal, invite strolling and prompt marveling. Fifty-eight key positions exemplify how the heavy material became light, idiosyncratic and subversive, thus defining the exhibition’s focus on the sculptural renewals of the past fifty years. The show is limited to “one" material as a specific medium of artistic production to highlight the different paradigms of contemporary sculpture in their historical quality and diversity. In this context, “Heavy Metal" refers not only to metal as a material, but also, in a figurative sense, to the deliberate disturbance of the observer’s world. Dr. Dirk Luckow explains, “Even though sculpture as an art form was more or less written off in the sixties, we think that ‘Heavy Metal’ offers a new perspective on the avant-garde by focussing on the seemingly conservative genre of metal sculpture. This strict limitation helped to create an exhibition with a special atmosphere, an exhibition whose profound beauty is revealed by haptic and visual exploration."

"The exhibition project is singular – especially from a scientific point of view – because its leitmotif is the history of a material. Without the generous support of the NORDMETALL-Stiftung, this weighty project would not have been possible," says Dr. Dirk Luckow. The director of the NORDMETALL-Stiftung, Dr. Marc Gottschald, describes his experience as sponsor of this extraordinary project. “We look back on a profound and stimulating dialogue about metal, our material. Initially, we presumed to know a thing or two in this field. But in the sculptures, we see a new side of the material, unfamiliar and mysterious." According to Gottschald, the foundation of the organisation of the electrical and the metal industry in Northern Germany finds it fascinating to experience the metal it is working with on a daily basis as an object of art.

THE EXHIBITION OF A CONTRADICTION
The exhibition begins in the sixties: In the artistic capitals of Europe and the Americas, the revolutionary avant-gardes postulate a radical expansion of the freedom of art. The modern concept of sculpture is challenged as well. The genre descends into a maelstrom of disintegration of post Fluxus quality until it is on the verge of completely dissolving into the concept of “Life-in-your-Heads". But then something paradoxical happens: Sculpture becomes the new, adaptive starting point of artistic thinking. The search for an obdurate material results in a new and unexpected appreciation for metals and all their different alloys.

THE AMBIGUITIES OF WEIGHT
What is lightness, or heaviness? The objects of the exhibition evade these questions and translate shifts of weight into subtle concepts. Richard Serra’s lead sculpture “Sign Board Prop" (1969), for instance, turns the spotlight on precarious equilibria that disturb the observer by their obvious instability – only a single point of support provides the reciprocal balance of weights. Geoffrey Hendricks converts the massive VW Beetle into an airy, light blue “Sky Car", evoking the exuberance of youth. Thomas Schütte’s “Große Geister Nr. 6" (“Large Ghosts") casually reach for the stars. The “Straits of Night" by John Chamberlain (1992, Collection Versicherung Winterthur) hide their weight behind the picturesque quality of compressed scrap metal, and Claes Oldenburgs’s sculpture “Soft Version of the Maquette for a Monument by Pablo Picasso" (1969) is an outright bluff – what looks like rusty metal really is fabric dyed a brownish hue. The exhibition provides, however, examples for the reversal of this principle as well: Stefan Kern transforms plastic bags into metal; Jürgen Drescher uses metal to fix his cardboard box “Karton (freistehend VII)" for eternity; Joseph Beuys, expanding the definition of art, casts a postcard in magnet steel; in “Fifteen Piece Puzzle" (2007), Jonathan Monk inverts the weight ratios and creates a place where the proportions of size and mass are distorted.
Fittingly, in the elaborate catalogue, produced by design company Ade Hauser Lacour (Frankfurt), the international exhibits are arranged according to weight. It begins with super heavyweight Anish Kapoor, continues with heavyweights and middleweights and finishes with flyweights, represented by Lygia Pape’s light and hovering aluminium discs.

THE SCULPTURAL PRINCIPLE
For the professional audience, the exhibition is a rich source for a new examination of the sculptural principle and for the discussion about the significance of sculpture at the present time. Art experts will be rewarded with subtle allusions to the icons of the history of art like the appearance of Jeff Koons’s Bunny in the video installation “Made in Heaven" (2004) by Mark Leckey. The classics of modern art, like the “Bottle Rack" (original 1914) by Marcel Duchamp, are rejuvenated by the exhibition – as are Jasper Johns, Donald Judd und Bruce Nauman. Searching for signs of lightness, the visitor will find sophisticated installations like “The Spikey Thing" (2005) by Tim Noble and Sue Webster who project the silhouette of a female body out of a metal tangle, or Olafur Eliasson’s unfathomable stainless steel pastry “Endless Doughnut" (2001), which depicts the intrinsic dynamics of metal vividly enough to send perception into an infinite loop. The viewer can discover examples of minimalistic simplification like Monika Sosnowska’s “Handrail", or be touched by “The night sky over New York/ October 21, 2007 at 9 pm": Carol Bove’s elaborate space installation is made of 475 bronze rods and shows the starry sky on a particular night – the birthday of Michele Maccarone, the owner of Bove’s New York gallery. The sculpture reacts to the physical presence of the viewer, taking on a hypnotic quality that allows for escapist daydreams. But there are occasions for philosophical speculation as well – Thomas Zipp’s bell with a skull and crossbones and its cryptic inscription “Geist ohne Körper" (“Mind without Body"), for example, or the lingering questions: Whether contemporary art is rather standing on its weight leg or on its free leg, whether the material or the spiritual is predominant; what strategies young artists of today use to create a state of weightlessness; and how all that relates to the emergence of a new avant-garde in the sixties.

THE BACKGROUND OF “HEAVY METAL"
The exhibition in Kiel not only shows metal sculptures, but also plays with the infinite possibilities of the material at the curatorial level: The title, “Heavy Metal", was inspired by the monumental photograph “Iron Maiden Monument" (2007) by Candice Breitz. Therefore it was virtually inevitable to show the cult film “Full Metal Village" (2006) by South Korean artist Cho Sung-Hyung, documenting the heavy metal festival in Wacken, as well as Jörg Immendorff’s painted avowal “Ich denke auch an Metall" (“I’m thinking about metal, too", 1978). The films selected as a complement to the exhibition – “Full Metal Jacket" by Stanley Kubrick and “The Unbearable Lightness of Being" based on the novel by Milan Kundera – help the visitor relate to the zeitgeist of the sixties. A first is the series of guided tours with the artists Sonja Vordermaier und Henk Visch, “Künstler führen durch die Ausstellung", which challenges the public to visit the exhibition individually and autonomously.

A cooperation with the NORDMETALL-Stiftung.