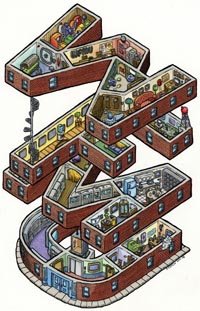 Printed Matter, Inc. is pleased to announce a benefit exhibition for WFMU that will feature artwork by over two dozen artists, including Olaf Bruening, Nicole Eisenman, Jad Fair, Mike Kelley, Chris Johanson, Christian Marclay, Richard Prince, and Cindy Sherman, among many others. Please join us from 5:00 – 7:00 PM on Saturday, December 6 to celebrate with an opening reception. The works will be on view through Saturday, December 13. Printed Matter is located at 195 Tenth Avenue (between 21st and 22nd Street).

In 2007, the FCC gave WFMU, New York City’s premier freeform radio station, permission to erect a much needed booster antenna in Manhattan. As any listener in Brooklyn or mid-town Manhattan can attest, the station's signal quality varies greatly from block to block with vast areas of the New York metropolitan area falling into black holes where WFMU's signal is unable to come in.

In order to raise funds for the new antenna, WFMU organized an art exhibition to be showcased at Printed Matter. The show's line-up, much the like the station's programming, is decidedly freeform with a mix of well established and emerging artists working in a variety of mediums including drawing, painting, photography, print, and collage. Many of the pieces in the show are new works that have been created especially for this benefit.

In keeping with the somewhat egalitarian nature of the station it was important to WFMU that much of the art be affordable. To this end WFMU commissioned several artists to create print editions while other artists have kindly agreed to sell their work for considerably less than their usual retail prices. More often than not, art benefits tend to be structured as auctions, a process which few people other than seasoned art collectors are comfortable with or enjoy. All the pieces in this benefit will be sold at fixed prices and many items will be priced to sell so come early!

WFMU is a freeform radio station that broadcasts out to the greater NYC area at 91.1 FM and online at wfmu.org. The station is a registered 501(c)3 non-profit organization, runs no commercials or underwriting announcements and is almost entirely funded by listener donations. Long revered for its unorthodox and eclectic programming, WFMU celebrates its 50th anniversary this year.

Printed Matter, Inc. was founded in 1976 by a group of like-minded artists and art workers. Now entering its 32nd year, it is the world’s largest non-profit organization devoted to artists’ publications. Printed Matter offers some 15,000 titles by 5,000 artists at its Chelsea storefront, by mail order, and on its website.