Reconsidering the Documentary and Contemporary Art 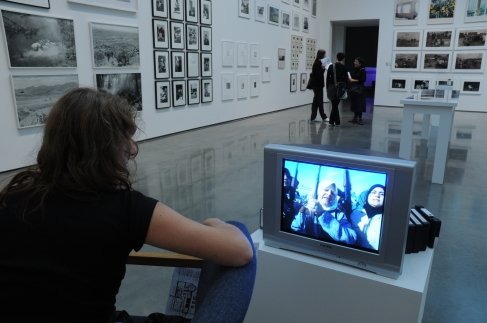 ANNANDALE-ON-HUDSON, N.Y. —This fall, CCS Bard presents The Greenroom: Reconsidering the Documentary and Contemporary Art from September 27, 2008 through February 1, 2009. Documentary practices make up one of the most significant tendencies within art of the last two decades. By merging with art traditions such as video-, performance-, and conceptual art, documentary forms have been reinvented and reinvigorated. Such recent documentary works attest to a new diversity and complexity of forms, ranging from conceptual mockumentaries to reflexive photo essays, from-split screen slide shows to found footage video reportage, from installations without any lens-based medium to printed matter. Many of them are about searching for suitable forms and methods to discuss social content, whether historical material or effects of recent political and economic upheaval. Although such innovative documentary art forms abound, and a large number of exhibitions and other projects dealing with documentary practices and contemporary art have been organized in different parts of the world, the phenomenon remains both under-discussed and under-theorized.

What is the function of documentary art forms in the context of globalizing media and an expanding art world? What is the relationship of fact and fiction, media and mediation in these documentary practices? What roles do the archive and issues of copyright play? How do the operations of documentary forms change in the age of digital reproduction? The Greenroom: Reconsidering the Documentary and Contemporary Art is an attempt to bring such questions to the fore and to stimulate a debate about the nature of representation in the 21st century.

The Greenroom: Reconsidering the Documentary and Contemporary Art is a project which is both an exhibition based on the paradigm of display and a “project-in progress,” i.e., something that develops in parts of the exhibition space during the exhibition period. In the middle of the exhibition space, Olivia Plender will create an installation that will function as a discursive space where lectures, screenings, seminars, performances, and panel discussions can take place. Thus the format of the exhibition is taken closely into consideration, including a black box cinema space where a number of works will be shown as part of a screening program. The Greenroom: Reconsidering the Documentary and Contemporary Art is a “greenroom for documentary practices,” not unlike a greenroom at a television station, where staff and guests meet before and after filming and engage in discussions which often differ from those in the limelight. Thereby the “just before” and the “right after,” moments of less scripted performances and unexpected encounters, are taken seriously. An important part of The Greenroom: Reconsidering the Documentary and Contemporary Art is the display of documentary works from the Marieluise Hessel Collection.

In conjunction with the exhibition, an anthology with recent texts on documentary practices and contemporary art will be copublished by CCS Bard and Sternberg Press, Berlin.
Admission to CCS Bard is free; museum hours are Wednesdays through Sundays, 1:00 – 5:00 p.m. The opening reception is Saturday, September 27 from 1:00 to 4:00 p.m. Limited free seating is available to the opening reception on a chartered bus from New York City. The bus returns to New York after the opening.

The Center for Curatorial Studies

The Center for Curatorial Studies at Bard College (CCS Bard) is an art, education, and research center dedicated to the study of art and curatorial practices from the 1960s to the present day. In addition to the CCS Galleries and the newly inaugurated Hessel Museum of Art, CCS Bard houses the Marieluise Hessel Collection of more than 2,000 contemporary works, as well as an extensive library and curatorial archive that are accessible to the general public. The Center’s two-year graduate program in curatorial studies is specifically designed to deepen students’ understanding of the intellectual and practical tasks of curating contemporary art. Exhibitions are presented year-round in the CCS Galleries and Hessel Museum of Art, providing students with the opportunity to work with world-renowned artists and curators. The exhibition program and the collection also serve as the basis for a wide-range of public programs and activities exploring art and its role in contemporary society.

CCS Galleries and Hessel Museum of Art
11 Annandale-on-Hudson - NY
Admission to CCS Bard is free; museum hours are Wednesdays through Sundays, 1:00 – 5:00 p.m. The opening reception is Saturday, September 27 from 1:00 to 4:00 p.m. Limited free seating is available to the opening reception on a chartered bus from New York City. The bus returns to New York after the opening.