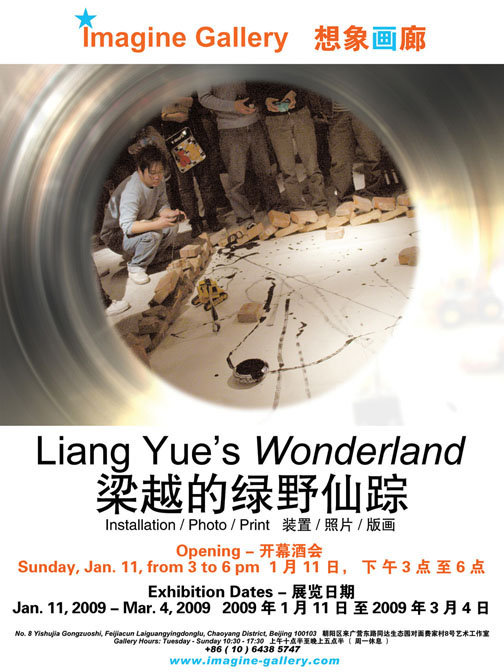 Liang Yue graduated in 1986 from the Guangzhou Academy of Fine Arts with award of Excellence in Prints. He has participated to "China Modern Art Exhibition" in 1989 with "Series of the City" which depicted the urban microcosm, with public mark-tall buildings, construction sites with tower lifts, crowded walking people, feeling ness portraits, getting rid of the time factor.

Later, Liang Yue has became sensitive to public symbols, to the urban experience of survival and capturing daily life of familiar and common objects, such as in his "Gloves Series" and "Key Series". In recent years, Liang Yue has moved to security doors, ID cards, work cards, medical treatment cards and certificates, and food safety certificates as in his "Reassured Advertisement, The Public Images of Liang Yue" Exhibition.

In Liang Yue's Wonderland, the installation "Construction Site" lets people calligraphy with mechanical toys shovels and cranes, enter into the tunnel of space and time with his charcoal drawing clocks series, or shut us up indoors with the burglar-proof door built for our own security. Finally Liang Yue prompts us to reconsider our own living environment, from institutional survival system in order, which can be awkward, embarrassing or even absurd. While modern civilization may have lost its dream, Wonderland still fascinates.