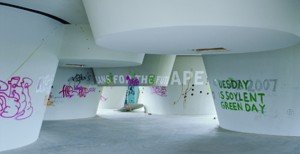 2009 marks the 70th anniversary of the start of the Second World War and the German invasion of Poland. In remembrance, Künstlerhaus Bethanien is showing the project “Wartopia” by the Polish artist Aleksandra Polisiewicz (curator: Bozena Czubak).
In “Wartopia” the artist essays a virtual recreation of the city of Warsaw according to unrealised National Socialist plans dating from the first years of the Second World War. In architectonic urban panoramas displayed as coloured prints, animations and design models, her visual reproductions reveal an equivocal view of history.
The starting point for the urban visions of Wartopia, which were generated using 3D-technology, was the National Socialists’ urban developmental concepts: they proposed the complete demolition of Warsaw in order to build “the new German city of Warsaw”, which would have housed less than a hundred thousand inhabitants. The city model realised virtually by Polisiewicz manifests the ambiguous historical dimension and also disturbs the viewer with its visual attractiveness: the aesthetics of the ensemble are based on elements of a monumental, modernistic classicism that presents itself as an icon of stereotype totalitarian architecture. Polisiewicz’s concept of the totalitarian city can be regarded as a critical mediatising of collective memory.
We are showing “Wartopia” in collaboration with the Polish Institute Berlin, where the exhibition can be viewed subsequently (4th – 28th February 2009, http://www.polnischekultur.de).

Marek Pisarsky and Anne Peschken have been working together as “Urban Art” since 1985. Peschken and Pisarsky practise interventions into public space belonging to the field of Concept Art, making use of a wide range of artistic media. The exhibition Globalpix in Studio 1 shows a selection of large-format “pixel images” as well as a video which has been produced in the style of a documentary soap. In order to create the pixel images, the artists collect painted-on canvases discarded by other artists and cut them into strips so that only slight traces of the original painting remain visible. After this, the strips are interwoven with one another on stretcher frames so that they generate basic structures for new images. These grid-shaped, square fields each represent one pixel when the images are painted later. The resulting images have a very coarse definition that can only be discerned properly from a distance. In search of up-to-date aesthetic and painterly forms of expression, parts of the images are painted over to produce a new composition, but fragments of the old painting are retained along with the memory of/an interlock with earlier art production. Pisarsky’s and Peschken’s depictions of historical themes thus correspond to the double-perspective viewing suitable for pixel-images, for it seems we can perceive “history” more clearly from a greater (temporal) distance than we can when we are at the heart of (temporally close) events.

"Wartopia" and "Globalpix" are being realised with generous support from the Governing Mayor of Berlin, Senate Office – Cultural Affairs.

15th January 2009, 7 – 10 pm, 1st + 2nd floor
As always at the beginning of each year, we would also like to give our visitors the opportunity to gain an insight into the work and current projects of those artists taking part in our International Studio Programme and to converse with artists from all over the world.
Artists: Jungju An ( R O K ), Cynthia Girard (CA), Romeo Gongora (CA), Ane Graff (N), Sara Hughes (NZ), Jost Kirsten (NA), Thomasz Kowalski (PL), Anouk Kruithof (NL), Pia Lindman (FIN), Ives Maes (B), Christian Niccoli (I), Christodoulos Panayiotou (CY), Björn Perborg (S), Sarah Ryan (AUS), Patrick Tuttofuoco (I), André Sousa (P).