Selected from the 2nd 01 San Jose Biennial: A Global Festival of Art on the Edge, "Superlight" presents the work of artists working at the intersection of art and digital culture. The exhibition is a look at such issues as the effects of a globalized economy, global climate change, and resistant colonialism, to the near universal experience of a failed or unbalanced relationship. Christian Wulffen is interested in how structure and context affect the meaning of objects and experiences. He explores the factors that influence one's perception, interpretation, and understanding of everyday life. 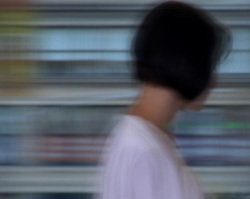 Selected from the 2nd 01 San Jose Biennial: A Global Festival of Art on the Edge, Superlight presents the work of artists from around the world working at the intersection of art and digital culture. Superlight presents art that lightens but does not make light of the seemingly intractable problems facing us. The exhibition is a serious look with a light touch at such issues as the effects of a globalized economy, global climate change, and resistant colonialism, to the near universal experience of a failed or unbalanced relationship. The artists in the exhibition employ humor, popular culture and the hybrid, virtual reality that we increasingly inhabit to create works that aerate and illuminate. They embrace ambiguity as an elemental life force. They believe passionately in their issues without being heavy or polemical.

The art ranges from Bruce Charlesworth’s computer-generated curmudgeon who interacts with the visitor, to Luke Dubois and Lián Amaris' never-ending film of a woman getting ready to go out, to Shih Chieh Huang’s magical kinetic sculptural installation of consumer detritus. Also among the works on view are Jane Marsching’s operatic visualization of temperatures at the North Pole over the course of the next 100 years; Kota Ezawa’s stripped down renditions of the Ikea catalogue as a critique of consumer culture and pop psychology; and the Australian Aboriginal artist Genevieve Grieves’ imaginative "do over" of the colonial gaze.

All of the work in Superlight shares a certain affinity for the glossy culture in which we live at the same time that it questions where slick, high tech visions of the future are actually leading us. Situated at the nexus of creativity and technology, the art in Superlight reflects the supercharged collision between innovation, the way things are now and an irrepressible need to re-imagine what matters most in what’s next.

IN THE VIDEO GALLERY: Future Films

A broad range of innovative work in the realm of the moving image featuring a selection of machinima (films made using video game engines), animations, DIY Hollywood productions, micro cinema, surveillance cinema, Second Life vignettes, mash-ups, and fan films from around the world.

Superlight is curated by Steve Dietz, Artistic Director of the 2nd 01SJ Biennial: A Global Festival of Art on the Edge. The Biennial, organized by ZERO1: The Art and Technology Network, is a multi-venue, multidisciplinary exhibition in San Jose, CA which is the largest and most significant platform in North America for the presentation of work at the intersection of art, technology, and digital culture. The exhibition in Cleveland is coordinated by Margo A. Crutchfield, Senior Curator.


"The work of Christian Wulffen proves to be a constant estimation of measurement: of his own action, of the possibilities of artistic utterance, of the chosen locations, of the art system.” – Nikolai B. Faustbauer

Wulffen earned his MFA from the State Academy of Fine Arts in Stuttgart, Germany in 1987. Previous to that, he was a visiting student at the Academy of Fine Arts in Düsseldorf and also at The Academy of Fine Arts in Philadelphia. His work has been shown in solo exhibitions at venues including the Municipal Art Museum, Singen; Kunsthaus Baselland; Stiftung für Konkrete Kunst (Reutlingen: www.stiftungkonkretekunst.de); Niklas von Bartha Gallery (London); Michael Sturm Gallery (Stuttgart); and the McDonough Museum of Art (Youngstown), among others. Wulffen was Artist-in-Residence at the Art Foundation Baden-Württemberg and the Cité Internationale des Arts (Paris). Before coming to the United States in 2003, he was an instructor at the Independent Art Academy (Metzingen) and the Artistic Associate to the Dean at the State Academy of Fine Arts in Stuttgart. He has been an Associate Professor at The Cleveland Institute of Art for five years.

Christian Wulffen is interested in how structure and context affect the meaning of objects and experiences. In the exhibition, Christian Wulffen: It Is, It Is Not, the artist explores the factors that influence one’s perception, interpretation, and understanding of "everyday life." Referencing concrete art, a European movement coined by Theo van Doesburg in 1930, Wulffen bases his artistic examinations on real objects, structures, and spaces. His handmade and pre-manufactured works combine recognizable objects like books and newspapers, familiar materials like graphite and wood, and basic forms like grids.

Like Sol Lewitt’s Incomplete Open Cubes or Rachel Whiteread’s negative casts of library book shelves and house interiors, Wulffen draws our attention to the structures and spaces in and around objects (and experiences) that help define their meaning. Through the repeating presence of the grid, he emphasizes how even the most fundamental structures can vary. Juxtaposing these abstract forms with recognizable objects, Wulffen shows the multiplicity of meaning available in every object and experience. In doing so, he reveals that interpretation (of art, of life, of anything) is an infinitely variable, context-based, highly subjective exercise.