A love tribute of italian contemporary artists to the US. As Director of the project, Ilaria Niccolini explains that the novelty of this show lies in "the courage to combine new talents, still to be discovered, with more established artists with a strong portfolio." 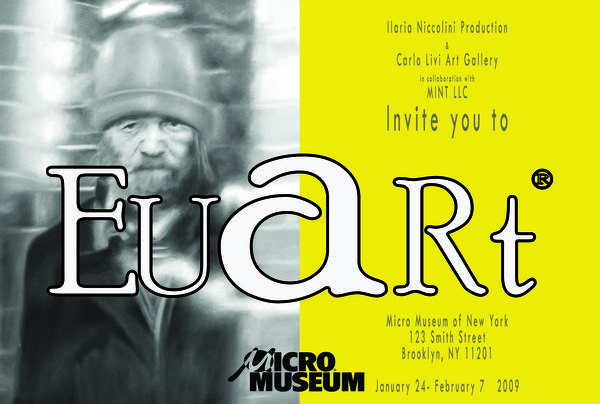 After its prestigious inauguration in Miami hosted by Ambassador Marco Rocca, EUART 2007/2008 participated in ART BASEL Miami and was exhibited for several months throughout the East Coast of the US with major stops in Miami (Alliance Francaise, Dante Alighieri Society, 166 Art Gallery), Boston (Federal Reserve Attic, Consulate General of Italy in Boston, Gallery Anthony Curtis, Arclinea Rimadesio Showroom) and New York.  Last spring, EUART was hosted in a magnificent reception at the Federal Reserve in Boston, thanks to the Patronage and support of Consul General of Italy in Boston Liborio Stellino who is ambassador for EUART also for its 2008/2009 season.

Under the Auspices of the Italian Cultural Institute in New York and the Patronage of Consulate General of Italy in Miami and Boston, EUART is now closing the 2007/2008 season with a new exhibition in the heart of  New York City  at the Micro Museum. Micro Museum was founded in 1986 as an interdisciplinary art center with over six hundred working artists.
As Director of EUART, Ilaria Niccolini explains that the novelty of this show lies in “the courage to combine new talents, still to be discovered, with more established artists with a strong portfolio. We believe that contemporary art is a growing treasure that needs to be nurtured step by step, with the passion and care that older generations pass on to the younger ones”. And Consul General Liborio Stellino adds that “ We are reminded of the history of the Italian immigrants who, a century ago, first met with the challenge of starting a new life in this great country, and who then welcomed the new generations sharing what they had learned, lived and accomplished.  This is the strength of us Italians who take inspiration from American patriotism to learn to love this country that generously welcomed us, and to be proud of our great treasures.”

The artists included in the New York Show are: Bruna Lanza, Roby Carullo, Veronica Francione, Clara Menerella, Lucia Cecchi, Monica Cecchi, Giovanni Mangiacapra, , Joe Vega, Silvano Picchi, Massimo Sansavini, Massimo Ribechi, Salvatore Sferrazza, Myriam Cappelletti, Laura Candy,  Flavio Del Pistoia, Elena Murer, Marta Mazzoni, Anna Ghisleni and Maddalena Barletta.  All talents featured in the show have deep cultural roots set down in the Italian artistic tradition that is known to be refined and sophisticated, yet they have also grown from that tradition to become a part of the global contemporary art phenomena. Many of their work concern topics that are beyond the Italian borders, which in turn place these artists on an international stage.

“Art is universal, but in reality it is often confined by localities. The mission of EUART is to break the boundary and make the Italian art a part of authentic American experience” as EUART partners Enrico Andreini  of Carlo Livi Art Gallery and Marina Terraciano of MINT and both co-directors of EUART say.