The Hugo Boss Prize 2008. Combining the role of archivist, activist, and poet, Jacir creates poignant works of art that are at once intensely personal and deeply political. Her work often addresses the circumstances of the Palestinian community, but also highlights the general condition of exile and the negotiation of tenuous borders as she focuses on the mundane details of everyday life as well as momentous historical events. The exhibition brings together 2 installations that address the October 1972 assassination of Palestinian intellectual Wael Zuaiter in Rome following the deadly kidnapping of the Israeli delegation of athletes and trainers to the 1972 Munich Summer Olympics. 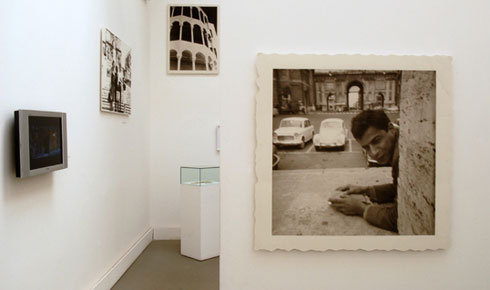 An exhibition of the work of artist Emily Jacir, winner of THE HUGO BOSS PRIZE 2008, will be on view at the Solomon R. Guggenheim Museum from February 6 through April 15, 2009. Jacir, who received the Golden Lion Award for an artist under 40 at the 52nd Venice Biennale in 2007, is the seventh artist to win the prestigious HUGO BOSS PRIZE, a biennial award that was established by HUGO BOSS and the Solomon R. Guggenheim Foundation in 1996 to recognize significant achievement in contemporary art.

In their statement, the jurors* of the HUGO BOSS PRIZE 2008 describe their selection: “Emily Jacir’s rigorous conceptual practice—comprising photography, video, performance, and installation-based work—bears witness to a culture torn by war and displacement. As a member of the Palestinian diaspora, she comments on issues of mobility (or the lack thereof), border crises, and historical amnesia through projects that unearth individual narratives and collective experiences. Jacir combines the roles of archivist, activist, and poet to create poignant and memorable works of art that are at once intensely personal and deeply political. It is the refined sophistication of Jacir's art and the relevance of her concerns—both global and local—in a time of war, transnationalism, and mass migration that led us to award her the 2008 HUGO BOSS PRIZE.”

This exhibition brings together, for the first time, two installations that address the October 1972 assassination of Palestinian intellectual Wael Zuaiter in Rome by Israeli secret service agents following the deadly kidnapping of the Israeli delegation of athletes and trainers, to the 1972 Munich Summer Olympics by the Palestinian militant group Black September (to which Zuaiter was never

conclusively linked). Material for a film (performance) (2006) presents a memorial to one of Zuaiter’s thwarted aspirations: the translation into Italian of the centuries-old collection of Arabic storiesOne Thousand and One Nights. A bullet pierced a copy of volume two of the ancient classic that Zuaiter was carrying when he was gunned down. For this installation, which was first shown at the 2006 Biennale of Sydney, Jacir photographed each page that showed vestiges of the bullet. She also learned to shoot a .22 caliber pistol—the same model used in the murder—and fired bullets into 1000 blank books, creating a haunting mausoleum that, in the artist’s words, “is a memorial to untold stories. To that which has not been translated. To stories that will never be written.” In Material for a film (2004– ), which was first exhibited at the 2007 Venice Biennale, Jacir culls items from Zuaiter’s personal effects, including photographs, books, correspondence, and music, along with other ephemera to create an intimate portrait. Jacir sought out his friends and family, as well as the places Zuaiter lived and frequented, in order to present a chronicle of his life, work, and passions. The titles of these works are derived from a chapter by filmmakers Elio Petri and Ugo Pirro of the 1979 collection of essays, poems, and memoirsFor a Palestinian: A Memorial to Wael Zuaiter, edited by Janet Venn-Brown. Their chapter is comprised of interviews with Zuaiter’s closest friends in Italy, from which the two authors had intended to produce a film about Zuaiter (but were unable to do so before Petri’s death in 1982). Jacir has continued the project, conducting her own interviews and research, and in Material for a film she has constructed a narrative, presented through her arresting use of material and space.

Emily Jacir lives and works in Ramallah, Palestine, and New York. She is a finalist for the Deutsche Börse Photography Prize 2009, presented by The Photographers’ Gallery in London. In 2007, she received the Golden Lion Award for an artist under 40 at the 52nd Venice Biennale and the Prince Claus Award, from the Prince Claus Fund for Culture and Development, The Hague. Jacir participated in the Whitney Independent Study Program, New York (1998-89), the Lower Manhattan Cultural Council Studio Residency Program, New York (1999-2000), and the National and International Studio Program at P.S. 1 Contemporary Art Center in New York (2000-01).

In November 2008, Jacir was selected as the HUGO BOSS PRIZE 2008 winner from a shortlist of finalists that included Christoph Büchel, Patty Chang, Sam Durant, Joachim Koester, and Roman Signer. According to the HUGO BOSS PRIZE criteria, the award is given to an artist whose work represents a significant development in contemporary art. The prize sets no restrictions in terms of age, gender, race, nationality, or media, and the nominations may include young, emerging artists, as well as established individuals whose public recognition may be long overdue. The prize carries an award of $100,000 and is administered by the Foundation.


Publication
In conjunction with the 2008 HUGO BOSS PRIZE, the Guggenheim has published a catalogue that features the work of all of the finalists, including special projects by each artist. The catalogue, designed by Helicopter L.L.C., includes essays by T.J. Demos, Liza Johnson, Shanna Ketchum-Heap of Birds, Lars Bang Larsen, and Gerhard Mack, with an introduction by Joan Young, Associate Curator of Contemporary Art, Solomon R. Guggenheim Museum. The catalogue is available for $19.95.

HUGO BOSS has provided critical support to many of the Guggenheim Museum’s programs since 1995. In addition to THE HUGO BOSS PRIZE, the company has helped to make possible the retrospectives of Matthew Barney, Georg Baselitz, Ross Bleckner, Francesco Clemente, Frank Gehry, Ellsworth Kelly, Robert Rauschenberg, and James Rosenquist; the presentation of Art in America: Now in Shanghai; the Ed Ruscha (2005) and Felix Gonzalez-Torres (2007) exhibitions in the U.S. Pavilion of the Venice Biennale; and the exhibition theanyspacewhatever (2008), featuring the works of several past finalists, including Maurizio Cattelan (2000), Douglas Gordon (1998 winner), Pierre Huyghe (2002 winner), and Rirkrit Tiravanija (2004 winner).

For additional information about THE HUGO BOSS PRIZE, please go to http://www.hugobossprize.com