Cinema of titles: 54 titles of an exhibition. The extraordinary challenge of combining writing, image, and sound to introduce a theme without giving too much away has majorly ushered and defined the emergence and style of a whole genre. Showing more than 50 opening and closing titles, the exhibition is a premiere to honor this special form of film. Works by Elaine & Saul Bass, Kent Bateman, Samuel Beckett, Maurice Binder, Stan Brakhage, Robert Brownjohn, Marc Bruckert, Jorg Buttgereit, Penny Causer, Jean Cocteau. 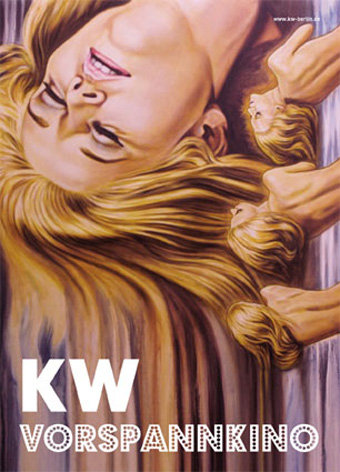 A stunning beauty weightlessly floating through space. As she gradually unveils words emerge and descend, covering her body like fig leaves. At the climax of this intro Barbarella delightfully floats before our eyes in paradisiacal nudity.
Umbral apparitions of uneven forms in the dark. Rhythmically to the ethereal play of a violine, the orifices of a face emerge as if reflected in a distorted mirror. The black gorge of a wide-opened throat engulfs our gaze and threatens to devour the titel Seconds.

The extraordinary challenge of combining writing, image, and sound to introduce a theme without giving too much away has majorly ushered and defined the emergence and style of a whole genre. Showing more than 50 opening and closing titles, the exhibition VORSPANNKINO (cinema of titles) is a premiere to honor this special form of film.

A woman’s face gradually emerges from darkness until her passive features seem to fill the screen. Suddenly her mouth contorts. The music swells to a hypnotic rhythm. The camera zooms in on her darting eyes and finally gives a disconcerting close-up of her right eye as it widens in panic. The image turns red. The title of the film appears from within the centre of the eye. Spinning out from the pupil a spiral grows larger and larger until it dizzily fills the entire screen—Vertigo.

Saul Bass’s title sequence draws viewers of Alfred Hitchcock’s Vertigo into the story before the action has even started. This is truly “great cinema”, from the first moment on. Title sequences bring together the levels of (real) film production and (fictional) locations. The exhibition VORSPANNKINO gives insight into a contemporary visualization of the phenomenon.

Only few title designers, among them Saul Bass, are known to the viewing public. Apart from Vertigo, Bass also created the title sequences for Hitchcock’s Psycho, Otto Preminger’s Bunny Lake is Missing, and John Frankenheimer’s Grand Prix. When in the mid-1950s film companies agreed to name all artists involved in a production in the opening credits, designers like Saul Bass, Wayne Fitzgerald, and Maurice Binder recognized the artistic potential of this legal requirement. The extended list of names and the films’ longer duration offered more possibilities to play with unconventional designs. Until today the range of opening sequences extends from purely graphics-based solutions to innovative lettering to independent film sequences with independent plots. The title has even been used as a suspense device, popping up after a short teaser so that the first dramatic climax takes place during the very title sequence. A seminal example is also the opening sequence of the mid-1990s movie Se7en. Inspired by Stan Brakhage’s battered-looking title images, Kyle Cooper created a prologue which gives a condensed summary of the plot and ending.