Double Take. Paying tribute to themes of doubling and mistaken identity, the artist creates a unique interpretation of Alfred Hitchcock's illustrious cameo television and film appearances, through which he examines the influence of this cinema icon on a deeper, more socio-political level. 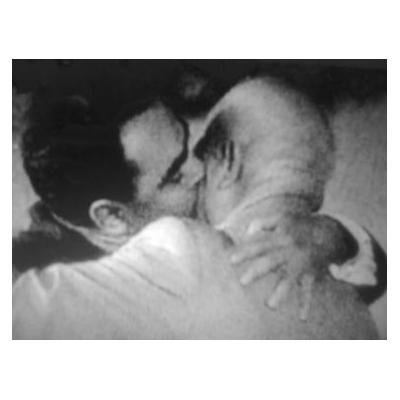 Sean Kelly Gallery is delighted to announce a major exhibition of new work by Belgian artist Johan Grimonprez — his first since joining the gallery. The exhibition includes his new film, DOUBLE TAKE.

Grimonprez's second film essay, DOUBLE TAKE, questions how our view of reality is held hostage by mass media, advertising and Hollywood. Written by award winning British novelist Tom McCarthy, the film addresses the global rise of fear-as-commodity, in a tale of odd couples and double deals. Paying tribute to themes of doubling and mistaken identity, Grimonprez creates a unique interpretation of Alfred Hitchcock's illustrious cameo television and film appearances, through which Grimonprez examines the influence of this cinema icon on a deeper, more socio-political level. The film covers the post World War II period to the beginning of the 1960s — an era characterized by prosperity and innocent consumerism on the one hand, and the Cold War, with Khrushchev, Nixon and institutionalized fear, on the other. The Cold War era was dominated by the conquest of space, sexual politics, anxiety and paranoia which disrupted the idyllic American suburban dream of the 1950s. In the words of Alfred Hitchcock, "Television brought murder into the American home, where it has always belonged." Not without humor, DOUBLE TAKE invites the viewer to question today's hegemony of the image, the truth and lies of reality and its influence on our society, politics and culture.

A compilation of short films, selected by Grimonprez and Charlotte Léouzon [Passion-Pictures Paris/London] titled MAYBE THE SKY IS REALLY GREEN AND WE'RE JUST COLORBLIND accompanies the exhibition. Shown for the first time in New York, it is presented in the form of a YouTube-o-Theque library, which contains clips from online television, cell phone videos, blogs and YouTube. As a product of a sophisticated generation brought up on a diet of television, and homemade productions, Grimonprez mixes reality and fiction in a wholly innovative fashion, and presents contemporary history in a multi-perspectival context, readily open to manipulation.

Johan Grimonprez's work is included in numerous collections such as the Centre Georges Pompidou, Paris, France, the Kanazawa Art Museum, Japan, the National Gallery, Berlin, Germany, and the Louisiana Museum of Modern Art, Denmark. Curatorial projects have been hosted at major museums worldwide such as the Whitney Museum in New York, the San Francisco Museum of Modern Art, the Pinakothek der Moderne in Munich, Germany and the Tate Modern in London, England. Grimonprez achieved international acclaim with his film essay Dial H-I-S-T-O-R-Y at Documenta X in Kassel, Germany, in 1997, which eerily foreshadowed the tragic events of September 11th in New York. Grimonprez is currently a faculty member at the School of Visual Arts (New York).

Grimonprez's film DOUBLE TAKE will have an avant-premiere at the Hammer Museum in Los Angeles March 12, 2009. It has also been selected for the 59th Berlinale International Forum 2009 in Berlin. DOUBLE TAKE will be included in the following exhibitions: in Un Certain Etat du Monde?, at The Garage Center for Contemporary Culture in Moscow, Russia, March 19, 2009; at Magazin 3 in Stockholm, Sweden, March 28, 2009; and at the Fruitmarket Gallery in Edinburgh, Scotland in May 2010.