Somebodyelse is an exhibition of portraits exploring the formation of cultural identity, in order to explore contemporary and historic culture. The display includes a new commission alongside work exhibited for the first time in Scotland. 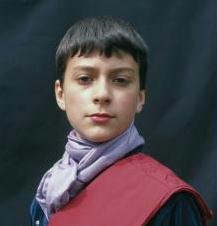 somebodyelse, an exhibition of portraits by Graham Fagen exploring the formation of cultural identity. The exhibition includes a new commission alongside work exhibited for the first time in Scotland.

The portraits in somebodyelse combine real and imagined figures in order to explore contemporary and historic culture. In his 2002 work Prince Charles Edward Stewart (aged 12) Fagen recreates - through photography - three portrait paintings from the National Galleries of Scotland of Charles Edward Stewart, looking at how historic figures are portrayed and, in turn, characterised within familiar representations.

Fagen has also pursued making a new work that represents the three main ‘cultural formers’ in contemporary Scotland. In Heads of Scotland Fagen aims to create a portrait of contemporary Scotland through photographic portraits of the people who represent the country’s main institutions - the government (represented by Alex Salmond), the judiciary (Arthur Campbell Hamilton, Lord Hamilton) and its two banks (represented by past and current chairmen of RBS and HBOS). Fagen seeks to answer the question, what would a portrait of Scotland as it is today look like?

somebodyelse also brings together previous work from various series by Fagen for the first time. These include Theatre from Fagen’s work as the Official War Artist for Kosovo, commissioned by the Imperial War Museum, London from 1999 – 2000. The photograph shows the artist with a Kosovo Albanian and a Kosovo Serb. Almost all of the works in the exhibition have not been exhibited in Scotland before.

somebodyelse is accompanied by a new publication with an essay exploring the role of performance and identity within portraiture by Dan Kidner, Director of City Projects, London. Graham Fagen was born in Glasgow in 1966 and lives and works in Scotland. He studied at the Glasgow School of Art and the Kent Institute of Art and Design. His work focuses on the means of communication within a culture, and how it is compromised or transformed when taken out of context. Many of his projects have also explored the notion of cultural identity and meaning.

In 2007 Graham Fagen was commissioned by Glasgow Museums to present downpreesser, a major solo exhibition at the Gallery of Modern Art (GoMA) for the commemoration of the abolition of slavery. The exhibition included Alvera Coke, commissioned by the GoMA and the British Council. He gained great critical acclaim for Killing Time his collaborative project with Graham Eatough of Suspect Culture at DCA, Dundee. He has previously exhibited at London’s Imperial War Museum, including Theatre (2000), the ICA and V&A as well as extensively throughout the world.