A Search for Certainties. The works shown at i8 were all made between 1955 and 1970. In the upper space of the gallery Agustsson's large paintings/drawings realised with tape will be shown while a selection of his drawings and graphics will be shown in the basement. 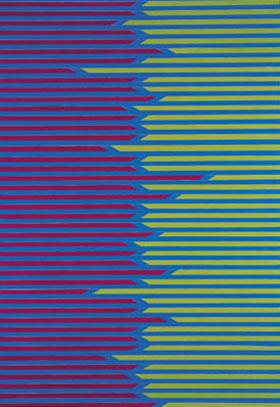 A SEARCH FOR CERTAINTIES

On Thursday March 21 at 5pm, an exhibition with works by Hordur Agustsson will open at i8 gallery.

Hordur Agustsson (b. 1922) is known for his art, design and his special interest in the heritage of Icelandic Architecture. In 1998 Agustsson's book Icelandic architectual heritage I, history of housebuilding from 1750 to 1940 was published, for which he received the Icelandic Literature reward.

The works shown at i8 were all made between 1955 and 1970.
In the upper space of the gallery Agustsson's large paintings/drawings realised with tape will be shown while a selection of his drawings and graphics will be shown in the basement.

It is oftentimes said that the present always changes the past. In this country, as well as on the European continent, artists have once again taken to paring their art down to the bare formal minimum or to camouflaging it as aestheticized data. In this case, the art historical antecedents for this resurgence, the heritage of Mondrian or Malevich, need not be invoked, since it is essentially a product of our time.
This new spare and minimal art can be seen as a bulwark of a kind, anattempt to resist the manifold pressures being applied to modern creative sensibilities: the relentless media pollution that cuts into our time and space for reflection, the temptations to conform to the edicts of a market-driven art scene, the tendency, fuelled by postmodernism, to belittle anything that smacks of "idealism or anyone seeking "absolute truths and the proliferation of impotent theorizing.
As often happens, the rediscovery of an older trend, in this case the minimalizing and conceptualising process, has led to a re-evaluation of hitherto neglected art and artists.
One particularly gratifying result of this current "revisionism is the increasing interest in HÃ¶rÃ°ur ÃgÃºstsson's works from 1955-1975. Outside experts have regarded these works as significant examples of Nordic Concrete Art, as well as preludes to international Minimalism.

The current exhibition at the I8 Gallery is a celebration of this new appreciation of the artist's work, as well as his 80th birthday.
In the past, Mr. ÃgÃºstsson refused to categorize these works as "concrete or minimalist, preferring instead to talk about them as stages on a personal journey towards knowledge and intellectual fulfilment. It is an unusual journey, at least in the context of Icelandic art.
It had its beginnings in the early Forties, when Mr. ÃgÃºstsson set out as a student of engineering and architecture. This led to an interest in the Bauhaus, with its emphasis on rational thought and purity of conception. Subsequently he was drawn to the theories of Renaissance writers such as Luca Pacioli and Leon Battista Alberti, both of whom were concerned with ideal proportion and the harmony of forms and colours. On a brief visit to Florence in 1948, Mr. ÃgÃºstsson came across a book that seemed to encapsulate all these theories, Matila Ghyka's "Le Nombre d'Or, published in 1931 with a preface by Paul ValÃ©ry. For years to come, this book was to sustain him in his quest. Thus, when Post-War Concrete Art, often termed Geometric Abstraction, hit Iceland in the early Fifties, Mr. ÃgÃºstsson was perhaps better prepared for it than any other Icelandic artist.
Again, I don't believe he ever saw Geometric Abstraction as a cohesive "style, but rather as an instrument of research that would help him to understand the inner workings of the work of art as well as the governing logic of thought. "I needed to look forthe fundamentals, basic forms, primary colours, and test their expressive potential to the full Mr. ÃgÃºstsson said in a 1983 interview. This was a search without any hope of finite answers, rather an unending process in what the artist termed his "form factory. Not until the mid Sixties did Mr. ÃgÃºstsson let on that his search for fundamentals and formal perfection might be more than an expression of hard-headed rationalism, that it also contained within itself a longing for some sort of religious certainty, what he himself once called "intimation of the innermost centre of being. By then he had already produced a handful of semi-figurative works with a strong religious connotations.
Given Mr. ÃgÃºstsson's long-standing interest in medieval studies, I would suggest that there was a direct connection between this longing and the writings of medieval philosophers such as St. Thomas Aquinas and the Neoplatonists. Beauty lies in proportion, says St. Thomas, in the harmony of forms and colours. Furthermore, the Neoplatonists maintained that, since the forms of all created things proceed ultimately from God, beauty in the material world is a reflection of the divine.
If we allow ourselves to juxtapose St. Thomas's "beauty and Mr. ÃgÃºstsson's "centre of being, we may discover a new, and ultimately more rewarding, way of interpreting these challenging works of art.
Adalsteinn IngÃ³lfsson

Opening on Thursday March 21 at 5pm