So near and yet so far away 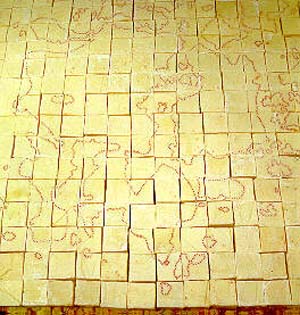 'The intrinsic Palestinian experience - which indicates some of the basic issues relating to Palestinian identity - takes place in a border area, i.e. at an airport, with a passport control checkpoint. It is one of the many modern border points where identities are checked and verified. The treatment the Palestinians experience at such checkpoints and road blocks make them conscious of how much they share as a people because here the six million Palestinians are subject to 'special treatment' and are relentlessly reminded of their identity, of who they are and why they are different.'

The second part of the exhibition series, 'FOCUS MIDDLE EAST', presents current positions of Palestinian art. They have been created in difficult conditions, resulting from the highly explosive political situation. And yet there is a lively and dedicated group of Palestinian artists who are represented at this exhibition with four artistic positions: Mona Hatoum, Khalil Rabah, Noel Jabbour and Raeda Saadeh.

Mona Hatoum (born in Beirut in 1952, lives in London) is the most widely known Palestinian artist whose international reputation is evidenced by her exhibiting at many important art institutes worldwide. Her installations and objects mostly consist of everyday objects which she often alienates in relation to the installation space and turns into radical, puristic creations. Her large floor installation, 'Present Tense', addresses the subject of the areas inhabited by Palestinians today by means of a huge map composed of hundreds of olive-oil soap blocks. The core of her work grapples with Palestinian and artistic identity, the role of women in the Arab world, as well as questions of power and violence.

In her performances, videos and space installations, the young artist Raeda Saadeh (born in Um eil Fahem in 1977, lives in Nazareth) also grapples with the Muslim attitude to women and feminine sexuality, integrating Christian and Muslim symbols and rituals into her spectacular stagings.

The artist and architect Khalil Rabah (born in Jerusalem in 1961, lives in Ramallah) represented Palestine very successfully at the 1998 Biennials in SÃ£o Paulo and Sydney. His rather reserved objects and conceptual installations compellingly deal with subjects from Palestinian politics and history and his people's symbols, difficulties and hopes.

These themes also play an important part in the work of the younger generation of artists, for example in the documentary photography of Noel Jabbour (born in Nazareth in 1970, lives in Jerusalem). Her 'Martyr Series' consists of specially arranged group portraits, while her 'Interiors' series shows details, resembling still-lives, of living rooms in Palestinian homes.

All the four artists represented at this exhibition deal in subtle ways with the societal and political problems of their people - beyond the daily political business - and address questions of national identity, religion, and 'country' as a living environment or national territory. In spite and because of their high level of abstraction, these works of art are of high emotional authenticity and directly convey the artists' criticism of existing conditions, their scepticism, but also their hope of a better, yet uncertain, future.

The exhibition catalogue includes a text by Jack Persekian.