Stephan Soreff and Athos Zacharias are New York art insiders who came to the scene when art was evolving from Abstract Expressionism into the movement of Pop Art. Through their work both artists were able to find a space in the breach and develop their own styles. 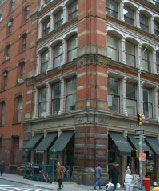 Stephan Soreff and Athos Zacharias are New York art insiders who came to the scene when art was evolving from Abstract Expressionism into the movement of Pop Art. Through their work both artists were able to find a space in the breach and develop their own styles. They have been friends for more t han thirty years, participating at the "Artists Club" and as members of the artists cooperative movement on Tenth Street in the late fifties and early sixties. Zacharias is a painter and Soreff a sculptor of conceptual objects, sharing a common set of artistic values and beliefs. Both artists were fortunate to know, to work and to have conversation with artists such as Rothko, Esteban Vincente, Phillip Pavia,Nick Carone, and others who later became known as members of the New YorkSchool. Soreff has held two exhibitions at the Betty Parsons Gallery, the first gallery to show the New York School. Athos Zacharias stepped into the art world in the mid fifties a s Elaine and Willem de Kooning's very first assistant. In a letter of recommendation of 1965, Willem de Kooning referred to Zacharias as 'one of us'. Zacharias use of the physicality of paint as a buildin g material of expression, combined with ready-made objects and a fascination for the emergence of pop art led to the development of expressionist pop art. Shifting between generations, Zacharias found a new inspiration with the development of electronic art. His recent works, influenced by experim ents with computer graphics, are preoccupied with architectural motifs and multi-reproduced images. On display will be aseries of paintings and computer generated prints, each image is painted in a different gamma, reminiscent of Andy Warhol's bright candy color multi-productions. Stephan Soreff displays a sense of irony and playfulness that unites him with Zacharias. They share a fascination with provocative speculations about art and the future. Soreff was ahead of his time when he began distributing his visionary art schemes as AGAR (Avant Guard ArtReview) in the 1970s, blending words and drawings in a compelling way. He works with found objects transforming real into imaginative, such as creating a conceptual installation of radio-sets mocking the age of information. His concepts include haired shoes or an illuminating face, work that evolves the mental element. Critics have called his works engagingly hermetic. This exhibition made possible with public funds from the NewYork State Council on the arts, a state agency, and Dynamo Development Co.

Curator: Regina Khidekel
The exhibition is open to the public from March 21 through April 9,
Tuesday - Friday during the hours of 12-5 p.m.
March 21 - April 9