GÃ¼nter Brus: extraordinary performance photographs from this artist's early period and several drawings and paintings from the 1980's until the present in which Brus explores personal and societal issues in an Expressionist-inspired style. Sue Williams: a Fine Line; having emerged in the 1980's with fiercely painted canvases that addressed issues of female abuse and aberrant sexuality, her work has evolved into a complex abstraction. 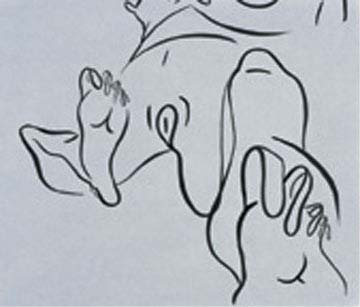 Lake Worth, FL - The Palm Beach Institute of Contemporary Art (PBICA) is pleased to announce first US solo museum show of Austrian artist GÃ¼nter Brus. The exhibition will open March 21, 2002 and continue through June 16, 2002. It will be shown in the mezzanine galleries.
Sue Williams: a Fine Line, opening March 17, will occupy the ground floor galleries.

PBICA will exhibit extraordinary performance photographs from this artist's early period and several drawings and paintings from the 1980's until the present in which Brus explores personal and societal issues in an Expressionist-inspired style.

"GÃ¼nter Brus has influenced generations of performance artists to this present day" says PBICA Director and Curator of the exhibition, Michael Rush. "His work is echoed in Paul McCarthy, Chris Burden, Matthew Barney and many, many other contemporary artists. Brus was known for his 'extreme' bodily performances, but his work was also remarkably beautiful as the photographs in this exhibition make clear."

About the artist:
One of the "Viennese Actionists" in the late 60's and early 70's, Brus's work has had a profound influence on subsequent generations of performance and media artists. Brus was born in 1938 in Ardning Austria. After attending the School of Arts and Crafts from 1954-58, he spent two years at the Academy of Applied Arts in Vienna leaving there in 1960 to pursue abstract expressive painting.

After spending a miserable time as a draftee in the Austrian military, Brus, attempting to re-establish himself as a painter, and wanting to make his own response to the dominant "Informel" painters (a type of Abstract Expressionism), decided to bind his hands and legs when painting in order to obliterate any sense of "gesture" or, much less, "composition" in his work. Thus, the Ana series, named for his wife, became an enactment of his own struggle with painting, even avant-garde painting. Tied in knots, which he forcefully escapes from, ending up stripped bare and powerless on the floor, Brus performs the battle of the artist in his studio, bound by tradition, but yearning to break free with the only instrument he has: his body.

As Brus's actions gained in intensity, so did his preoccupation with sexual and physical taboos largely in response to the repressive social structures he and many others of his generation felt. In Body Analyses the context shifted from the artistic to the social as Brus inveighed against Vienna and the "municipal sewer brigade of the Sigmund Freud City," as he described it, recalling in lengthy rants and raves the outcries of the despondent and psychotic Vaslav Nijinsky. Brus, unlike the psychotic, however, was always keenly aware of the poetic basis of his declarations. Language and action became the tools of his protests.

Brus shocked with full force in 1968 in Action No. 33 performed at Vienna University as part of a symposium on Art and Revolution. Not at all amused with his actions on stage, a judge sentenced him to six months in jail for degrading state symbols. Rather than serve, Brus fled with his family to Berlin. While in Germany, short actions followed until 1970 when, with Action No. 43, he performed his last: "self-injury, rattling sounds in the throat, strangulations, flogging, spastic behavior, and so forth (yield to) an abrupt stop ...and a comforting conflict solution." He and his body had had enough. He was now thirty-two and eager to return to painting and writing.

His later work has taken the form of "Image-Poems," as he calls them: paintings which incorporate figures, texts and vivid colors. More than a dozen of these paintings will be included in the exhibition along with several dozen documentary photographs.

A full color catalogue will accompany the exhibition with essays by Rush and Austrian art historian Johanna Schwanberg. The catalogue will be published in English and German.

SOLO MUSEUM EXHIBITION OF THE WORK OF SUE WILLIAMS

Lake Worth, FL--- The Palm Beach Institute of Contemporary Art (PBICA) is pleased to announce SUE WILLIAMS: A FINE LINE, the first solo exhibition in the United states devoted to the work of this renowned contemporary artist. The exhibition will open March 17, 2002 and continue through June 16, 2002.

Having emerged in the 1980's with fiercely painted canvases that addressed issues of female abuse and aberrant sexuality, her work has evolved into a complex abstraction that critic Michael Kimmelman has compared to Jackson Pollock, Willem de Kooning and Joan Mitchell.

Containing more than 35 works, SUE WILLIAMS: A FINE LINE will feature work from the 1990's especially several large paintings from the mid to late 90's including Big Red Shoes, 1998 and Winter Sunset, 2000. Included with the large and smaller canvases will be works on vellum and drawings on paper.

"It is a great pleasure for us to present the first U.S. museum show for this extraordinary artist," says PBICA Director Michael Rush. "She is surely one of the leading painters of our time. She represents a re-invigorated commitment to abstraction among younger artists."

SUE WILLIAMS: A FINE LINE is curated by PBICA Director Michael Rush. A full-color catalogue with essays by Rush and critic Barry Schwabsky will accompany the exhibition.

About the artist:
Sue Williams was born in 1954 in Chicago Heights, Ill. and received her B.F.A. from the California Institute of the Arts in 1976. Her extraordinary gifts as a painter won for her a place in three consecutive Whitney Biennials, 1993, '95, and '97. In conjunction with the '97 Biennial, curator Rush made a film on Ms. Williams which will also be included in the PBICA exhibition. In addition to the Whitney, other museums holding her work include the Museum of Modern Art and the Hirshhorn Museum.