The constellation of works in "Galaxy: A Hundred or So Stars Visible to the Naked Eye" illuminates the Berkeley Art Museum collection and reflects its particular evolution."Taking Refuge - Buddhist Art from the Land of White Clouds" is curated by Julia M. White, and contains over thirty important and beautiful objects from Tibet, Nepal, Kashmir, and India. 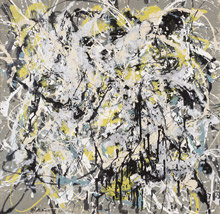 A museum collection evolves over time, and its shape results from the dual influences of accident and intention. With the exception of museums established by a single collector or those with a very specific focus, most institutional collections express the developing mission of the institution, the diverse cultural values of the community, and the changing tastes of various curators, directors, and trustees. A museum collection typically includes art acquired by purchase and by gift, works that are actively sought after and works that arrive unheralded, masterworks on virtually perpetual display and pieces that are almost never shown. Museums typically exhibit a small fraction of their collection at any given time: one to five percent is the norm. So a collection is a largely invisible, sprawling thing, containing works that reinforce our expectations as well as others that may confuse and mystify.

The constellation of works in Galaxy: A Hundred or So Stars Visible to the Naked Eye, on view in Galleries 4, 5, and 6, illuminates the Berkeley Art Museum collection and reflects its particular evolution. When the museum was founded in 1963, it inherited, among other things, several nineteenth-century landscapes by artists such as Albert Bierstadt and Théodore Rousseau that had belonged to the University for decades. Yet the museum’s founding was also made possible by the donation of forty-seven of his own canvases by the Abstract Expressionist painter Hans Hofmann. So, from the start, BAM/PFA’s collection expressed the interests and imperatives of diverse cultural moments. Our first director, Peter Selz, built the nascent collection around the Hofmann donation, acquiring by gift and purchase paintings and sculptures by many of the leading American and European postwar artists working in an abstract mode. Selz, who organized important early shows of kinetic and Funk art, also grew the museum’s collection in these areas. By acquiring works by artists who were considered at the time to be relatively untested and “emerging,” he set the tone for future acquisitions of contemporary works. We have certainly benefited from this approach, acquiring major pieces by artists such as Luc Tuymans, Adrian Piper, Lorna Simpson, Catherine Opie, and John Zurier well before they achieved their current renown.

The BAM collection has a number of other strengths that are the result of our unique institutional history and the special passions of our staff and admirers. Our holdings of Old Master prints and drawings are thanks largely to the generosity of astute connoisseurs and donors such as Dr. and Mrs. Joseph Goldyne and Dr. and Mrs. Werner Z. Hirsch. Our exceptional collection of photographs, including many rare daguerreotypes, has been deepened thanks to Berkeley collector and BAM/PFA Trustee Robert Harshorn Shimshak and Marion Brenner. BAM/PFA has become one of the leading museums in the country in which to see Ming and Ching dynasty Chinese painting, mostly thanks to Professor James Cahill, regarded as one of the most important scholars of Chinese painting in the world and a longtime faculty member at Cal. And BAM/PFA’s extraordinary collection of Conceptual art and related archives grew around the donation of a very large group of works by Theresa Hak Kyung Cha, a Cal alumna and a highly influential artist.

Galaxy is a very personal exploration of the BAM collection. Having worked at BAM/PFA as a curator from 1988 to 1998, I was already aware of many of the museum’s holdings. Since returning to BAM/PFA as director I have spent as much time as possible viewing works added to the collection since I left, as well as exploring areas previously unfamiliar to me. I have benefited greatly from the collaboration of Curatorial Associate Stephanie Cannizzo, who possesses comprehensive knowledge of the collection as well as a keen sensitivity to artistic quality and historical detail. Julia White, senior curator for Asian art, has generously offered her time to begin the long process of educating me about our historical Chinese, Japanese, and Indian holdings.

There is nothing quite like looking through a museum’s collection in storage, where the art—often stripped of its honorific framing and flattering lighting—becomes a vulnerable thing, but also extremely potent in its raw, unglamorized presence. In storage, too, the works are not arranged chronologically or thematically, which makes possible the experience of many unexpected, often jarring, and occasionally illuminating juxtapositions. I have tried to preserve this sense of fortuitous association in arranging the current show. Not all of my favorites are on view, but these are all works that I love and want to know better. I invite you to get to know them along with me, and to discover new favorites of your own.

The stars that are visible in the night sky represent only a small corner of our own relatively modest galaxy; yet they provide for an experience of unfathomable
wonder . . . and they will always be there.

A gilt bronze standing image of Buddha from western Tibet, created by Kashmiri craftsmen in the tenth or eleventh century, is one of the finest examples from an important transitional phase in Himalayan Buddhism. The Buddha is depicted in a highly symmetrical stance, draped in a tightly fitted robe, his legs planted firmly upon a lotus base. His right hand is raised in abhaya mudra, or fear abiding gesture, while his left hand grasps the edge of his robe. The face of the Buddha is delicately articulated with arched brow and gentle expression. His long earlobes point to the Buddha’s previous life as an Indian prince who has since renounced his life of privilege, including the jewels he once wore.

The importance of teachers in the Buddhist tradition cannot be overstated, as the transmission of the Dharma requires a direct and personal relationship with a teacher. Great lamas are honored in many ways, through depiction in paintings and sculpture or in monuments large and small. A bronze stupa in the exhibition demonstrates this tradition, honoring through inscribed verse an important sixteenth-century lama. The stupa once contained the relics of the teacher but now only bears his name. Other items that formally teach the Dharma include paintings depicting important principles like those expressed in the Bardo (Tibetan Book of the Dead). A colorful example can be seen in a pair of eighteenth-century paintings depicting both wrathful and peaceful deities from the Bardo.

Vajrayana Buddhism is the primary teaching in Tibet and the Himalayas, and has absorbed many doctrines that the lamas share with a larger community known as the Sangha. The esoteric doctrine that is passed from the master rimpoche to the disciple relies very heavily on oral transmission accompanied by visual aids such as mandalas, thangkas, and sculptural representations of members of the community. An elegant ninth- or tenth-century gilt bronze Padmapani (an aspect of Avalokitesvara, bodhisattva of compassion) communicates the nature of an important deity, while more earthly qualities are expressed in a sixteenth-century gilt bronze image of the teacher Mahasidda Avadhutipa.

The vast array of images of deities, teachers, protectors, and saints, all of whom receive attention by the devout Buddhist, are understood to be tools in the process of understanding the teachings of the Buddha. Although they are honored, placed on altars and pedestals, and given great respect, the images the practitioner knows have no value in and of themselves.