A group show that links works by some of the 20th century's greatest artists with those of a younger generation of established and emerging talent. The exhibition explores how artists use distancing techniques to mask the author, employ ciphers and symbols and create alter-egos, fantastical self portraits, animal surrogates or even new hypothetical realms. 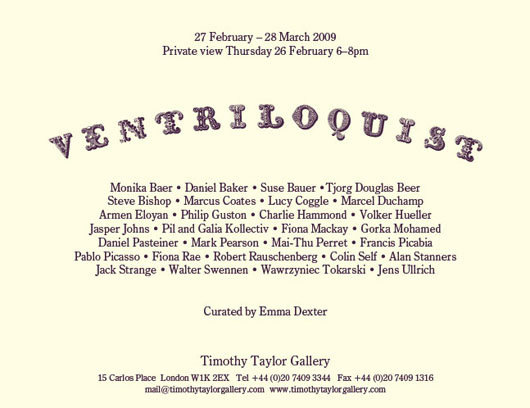 Timothy Taylor Gallery is delighted to present Ventriloquist, a group show that links works by some of the 20th centuryʼs greatest artists with those of a younger generation of established and emerging talent. Ventriloquism – the act of stagecraft by which the performer manipulates his or her own voice so that it appears to come from elsewhere, is also described as the ability to "throw" one's own voice. However, the term "throwing one's voice" is misleading - implying that a sound's physical origin has changed, when really the change has been perceptual and not physical. Taking its title from a work by Jasper Johns included in the exhibition, Ventriloquist explores how artists use ʻdistancingʼ techniques to mask the author, employ ciphers and symbols and create alter-egos, fantastical self portraits, animal surrogates or even new hypothetical realms. It also explores the use of text and language which, through the influence of Freud, Dada and Surrealism, opened the door to wordplay and games, multiple meanings and associations.

In Jasper Johnʼs Untitled (Ventriloquist), 1984, the artist uses the voices of others to conjure up an enigmatic and alternative vision of Americanness: the painting juxtaposes the outline of Herman Melvilleʼs ʻMoby Dickʼ (channelled through an engraving by Barry Moser) with the work of the eccentric 19th century Biloxi potter George Ohr, an iconic American figure, who was hailed mid 20th century as a harbinger of abstraction. Challenging art rules and upsetting bourgeois sensibilities, Dada and Surrealism introduced word games and double-entendres to the realm of art. In Duchampʼs L.H.O.O.Q. Shaved, 1965, the artist reworked his famous moustache-sporting Mona Lisa by creating another version, this time without the facial hair – thereby creating the ultimate ready-made/ appropriationist artwork. The title L.H.O.O.Q. is a phonetic game: when read quickly in French, it sounds like a sentence that roughly translates as ʻshe has a hot assʼ.

Francis Picabiaʼs Untitled, 1948–50, reveals the influence upon the artist of Nietszcheʼs The Gay Science, in which the German philosopher extols in poetry and prose the legacy of the Provençal troubadour tradition and its joyful affirmation of life. Ferociously unconventional throughout his life and a key participant in Dadaʼs anti-art stance, Picabia, at the end of his career, returned to graphic abstraction to explore the nature of life and art, fear, joy and love; strong lines and earthy colour and imagery combine in this primitive and phallic head, strongly reminiscent of pre-Cycladic and Iberian fertility imagery.

In Docket of Violation, 1954, Robert Rauschenbergʼs collage testifies to another vision of America constructed through found materials: the docket and the Statue of Liberty conjure the power and the promise of the land of the free. The exhibition also features Philip Gustonʼs late figurative work Inside Outside, 1977. Guston employs his personal symbolic language to create his trademark lugubrious and claustrophobic world; bugs, boots, bottles and trash-cans all combine to create a stark existential meditation.