Photorealism is an approach to painting that emerged in the late 1960s and took the photograph as a point of departure for representations of the everyday objects, places, and people that defined urban and suburban American life. The exhibition includes 32 paintings and 10 works on paper by 17 artists. It is divided into four sections, three exploring key themes of Photorealist painting during this period - Reflections on the City, Culture of Consumption, and American Life- and a fourth dedicated to a portfolio of lithographs made on the occasion of Documenta 5 in 1972. 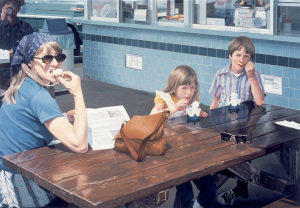 Photorealism, an approach to painting that emerged in the late 1960s and took the photograph as a point of departure for representations of the everyday objects, places, and people that defined urban and suburban American life, was first introduced to an international audience on a large scale in Kassel, Germany, at Documenta 5 in 1972. A number of exhibitions were subsequently mounted in Germany in the years immediately following this historically significant presentation, but Picturing America: Photorealism in the 1970s at the Deutsche Guggenheim is the first major showing of Photorealism there in nearly thirty years.
Like many of their contemporaries, the artists who pioneered photorealistic techniques in the late 1960s and 1970s sought to challenge the extreme emphasis on subjectivity and emotion that characterized Abstract Expressionism. They had in common with the Pop artists an interest in producing figurative paintings depicting contemporary, quotidian subject matter; however, they did not present their ubiquitous, often mundane, themes in a glamorized or ironic manner. They instead sought to achieve a great degree of objectivity and precision in the execution of their work in an effort to stay more or less faithful to the mechanically generated images that served as their source material. They developed various means of systematically translating photographic information onto canvas. In prioritizing the way the camera sees over the way the eye sees, they underscored the complexity of the relationship between the reproduction and the reproduced as well as the impact of photography on the perception of daily life and reality in general.
Picturing America focuses on the development and refinement of these defining aspects of Photorealism during the formative decade of the 1970s.

The exhibition includes thirty-two paintings and ten works on paper (a number of them the most iconic and masterful works of 1967–82, for example Richard Estes’s Telephone Booths [1967] and Chuck Close’s Leslie [1973]) by seventeen artists: Robert Bechtle, Charles Bell, Tom Blackwell, Robert Cottingham, Don Eddy, Audrey Flack, Franz Gertsch, Ralph Goings, Ron Kleemann, Richard McLean, Malcolm Morley, Stephen Posen, John Salt, Ben Schonzeit, and Paul Staiger. It is divided into four sections, three exploring key themes of Photorealist painting during this period—Reflections on the City, Culture of Consumption, and American Life—and a fourth dedicated to a portfolio of lithographs made on the occasion of Documenta 5.

Reflections on the City
A majority of the paintings on the theme of Reflections on the City capture the energy and cacophony of New York City. Dominated by bold signage and enticing storefronts, these images transmit the visual overload that defines the metropolis and is further heightened by the reflective surfaces of shop windows, cars, and telephone booths, which generate vivid collages of the immediate surroundings and the vital pulse of daily life. While people do appear in many of these pictures, they are rarely the main subject of the works and more often than not appear as a trace—but one of many threads in the urban fabric.

Culture of Consumption
This section charts America’s fascination with cars and food. The robust consumer culture that emerged in the United States following World War II led to a dramatic rise in personal automobile ownership, in part due to practical reasons and in part because cars were seen as both a status symbol and a means of attaining the freedom embodied by the open road. In the 1970s, many Photorealists explored this subject, capturing the glimmering surfaces of the trucks, cars, trailers, and motorcycles that punctuated the landscape of cities and suburbs alike. At the same time, Americans were tempted by another kind of speed, namely the convenience of fast food made available through the proliferation of franchises such as McDonald’s. Photorealist artists captured both the locales and actual foodstuffs that defined this culture of consumption, which proffered the comfort of the familiar and the reassurance of mass availability.

American Life
A crucial aspect of Photorealist painting, and one often discussed in European literature of the 1970s, was its ability to capture the defining aspects of “American Life.” In the 1960s and 1970s, a new generation of cameras geared towards the amateur market became available that allowed for quick and easy picture taking as well as relatively inexpensive printing.

Average Americans thus had the means to photograph both ordinary and significant moments. Like the typical family album, Photorealist artworks painted a picture of everyday people and places. Many artists took family members, friends, or neighbors as their subjects. While some produced portraits of individuals, others depicted groups of people in commonplace settings such as the home, or engaged in leisure activities. These images therefore represent not only a degree of specificity, both in terms of the way things look and the particular people and locales shown, but also a more generic view of America in the 1970s.

Documenta 5
The three themes of Reflections on the City, Culture of Consumption, and American Life are all represented in DOCUMENTA: A portfolio of ten lithographs by ten super-realists chosen for Documenta in Kassel, Germany, 1972, produced by the Shorewood Atelier, New York, to commemorate Documenta 5’s historic presentation of Photorealism. Like the portfolio, this exhibition seeks to recognize Germany’s important role in the early history of Photorealism through the inclusion of not only the suite of ten lithographs but also a handful of paintings shown at Documenta 5 and a rich selection of works from the collection of Peter and Irene Ludwig, who, two years before Documenta 5, began sharing their Photorealist holdings with the public at the Neue Galerie der Stadt Aachen.

Both individually and collectively, the artists in Picturing America played a part in transforming the possibilities for art during the pivotal decade of the 1970s. Taken together, the works in this exhibition, which are at once deeply nostalgic and incredibly fresh, provide a snapshot of both this important chapter in art history and a particular moment in American history.

The exhibition is being organized by Dr. Valerie L. Hillings, Assistant Curator, Solomon R. Guggenheim Museum. It will be accompanied by fully illustrated catalogue in German and English, with text by Hillings, Linda Chase, and David M. Lubin at a price of 28 Euros.
Edition No. 46 is Picturing America (the album), 2009, an artist book in the form of a family photo-album, with found material, visual works and text contributions by Robert Bechtle, Tom Blackwell, Chuck Close, Robert Cottingham, Don Eddy, Richard Estes, Audrey Flack, Ralph Goings, Ron Kleeman, John Salt and Ben Schonzeit. These personal memories of the 1970s appear in a partially signed edition of 50 copies/ 35 A.P. that are exclusively available at the Deutsche Guggenheim SHOP.

Picturing America is accompanied by an extensive supporting program initiated by the Artist’s Panel with Robert Bechtle, Tom Blackwell, Audrey Flack and Ben Schonzeit in a conversation with Linda Chase and Valerie Hillings. The series is continued by a discussion between Hannes von Goesseln and Michael S. Cullen, and lectures by Dr. Wolfgang Becker and David Lubin that provide new and interesting insights into the exhibition. Children and youths can try out their talent in special workshops.

Guided tours are offered free of charge everyday at 6 p.m. The popular Lunch Lectures on Wednesdays at 1 p.m., the established Brunch Lectures on Sundays at 11:30 a.m., which focus on specific topics of the exhibition, as well as the I like Mondays Lectures on Mondays from 11 a.m. to 2 p.m. and 4 p.m. to 7 p.m. complete the range of possible art encounters.