"Paper: Pressed, Stained, Slashed, Folded" focuses on works on paper, including prints, illustrated books, and selected drawings, that explore and manipulate the materiality of paper itself. Works by Ed Ruscha, Mona Hatoum, Ellen Gallagher, and Martin Creed and many others. "Stage Pictures: Drawing for Performance" presents a selection of designs for dance, theater, and opera from MoMA's collection. The exhibition highlights set and costume studies, as well as more abstract suggestions of light and mood, spanning a century of visual experimentation on the stage from the total theaters of the Ballets Russes to contemporary epic opera. 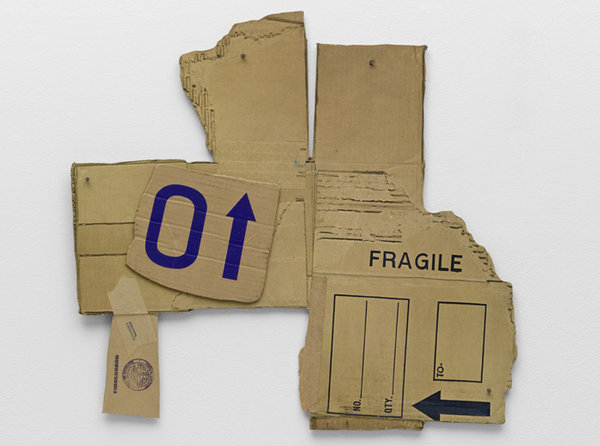 The Museum of Modern Art presents Paper: Pressed, Stained, Slashed, Folded, an exhibition of approximately 70 works from MoMA’s collection that explore and manipulate the materiality of paper. Comprising prints and illustrated books as well as drawings and a papier-mâché sculpture, the exhibition focuses largely on works from the 1960s and 1970s, when an interest in everyday materials and nontraditional processes fueled the redeployment of some of the most familiar and humble mediums. On view are works by approximately 30 artists, including Lucio Fontana, Eva Hesse, Lygia Pape, Robert Rauschenberg, Dorothea Rockburne, Dieter Roth, and Ed Ruscha, as well as examples by contemporary artists Martin Creed, Ellen Gallagher, and Mona Hatoum, among others. Recent acquisitions by Giuseppe Penone and Mira Schendel are on display for the first time. The exhibition is organized by Starr Figura, The Phyllis Ann and Walter Borten Associate Curator of Prints and Illustrated Books, and is on view March 11 through June 22, 2009, in The Paul J. Sachs Prints and Illustrated Books Galleries, on the second floor.

In the 1960s Lucio Fontana (Italian, b. Argentina, 1899-1968) experimented with different methods of violating the surfaces in his works on paper, slashing and puncturing them much as he had already done in his works on canvas. Included in the exhibition are his portfolio Six Original Etchings (1964) and artist’s book Spatial Concept (1966). In the etchings Fontana used metal printing plates to puncture the paper, resulting in a pattern of pockmarks on each sheet. What in an earlier era would have been a printing accident was here a deliberate aesthetic decision. Spatial Concept is a small book of gold, accordion-folded paper with die-cut holes through each page.

The potential of paper as a sculptural material is investigated in the work of Dorothea Rockburne (American, b. Canada 1932). Included in Paper are all six prints from her 1972 series Locus. To make them, Rockburne folded large sheets of paper before running them through a printing press, thus creating embossed lines in triangular segments. Aquatint—which appears as a velvety off-white against the white paper—was printed on the portions of folded paper that faced outward and came in contact with the printing plate. The process of folding then unfolding the sheets of paper gives them a sense of sculptural relief.

Ed Ruscha and Dieter Roth created print editions by pressing food and other organic materials onto paper. On display are works from Ruscha’s (American, b. 1937) portfolio Stains (1969), created at a time when the artist was turning away from traditional painting in order to experiment with unusual substances. Here Ruscha applied food, drugstore products, and other wet materials to sheets of paper using an eyedropper. Two works by Dieter Roth (Swiss, b. Germany, 1930-1988), another artist who challenged traditional notions about artistic materials, are also included in the exhibition. To make Large Sunset (1968) and Large Landscape (1969), the artist pressed sausage and cheese, respectively, onto paper using a printing press. Over time the works gradually decomposed, exemplifying the themes of decay and metamorphosis that Roth emphasized throughout his artistic career.

Other artists, including Sol LeWitt, Robert Rauschenberg, and Richard Tuttle, similarly embraced the delicacy and mutability of paper. Included are two works by Rauschenberg (American, 1925-2008), including Cardbird VI (1971), an edition made from corrugated cardboard and sealing tape. During this time, Rauschenberg was one of many artists who sought to challenge the strict definitions of centuries-old print processes including woodcut, etching, and lithography. In 1974, he spent time at the venerable Richard de Bas paper mill in Ambert, France, where he experimented freely with paper pulp and developed a series of handmade paper editions titled Pages and Fuses. Page 4 from this series is composed of two sheets of handmade paper formed in a mold designed by Rauschenberg. A piece of twine was laminated into the sheets as they were made, connecting the two and introducing a sculptural element to the work.

This quasi-sculptural approach has extended into the present and is reflected in the work of a younger generation of artists including Martin Creed, Ellen Gallagher, and Mona Hatoum. On display are three works by Hatoum (British of Palestinian origin, b. Beirut, Lebanon 1952), including Untitled (Grater) (1996), a wax paper rubbing taken from an antique kitchen utensil. The embossing is both a literal trace of the object and a ghostly image, evoking, like much of Hatoum’s work, the fragility of life.

An online exhibition will provide an interactive presentation of the works included in Paper, with a slideshow of selected highlights, interpretive texts, and an illustrated checklist of the exhibition. The site will launch by March 17, 2009. http://www.moma.org/paper

Featuring approximately 150 drawings from The Museum of Modern Art's collection, Stage Pictures: Drawing for Performance investigates the work that results when artists design for theater, dance, and opera. The exhibition highlights set and costume studies, as well as more abstract suggestions of light and mood, from the total theaters of the Ballets Russes and the Bauhaus, to Lincoln Kirstein’s formation of the New York City Ballet, to Pop performances and contemporary epic opera. The works, many rarely on view, span a century of visual experimentation on the stage, demonstrating how artists have used drawing strategies to translate texts into dramatic mises-en-scène, articulate illumination and shadow, imagine the form and presentation of character, manipulate bodies in space, and express duration. Such artists as Marc Chagall, Sonia Delaunay-Terk, Jim Dine, George Grosz, David Hockney, William Kentridge, Fernand Léger, Lyubov Popova, Diego Rivera, Oskar Schlemmer, and Robert Wilson are featured alongside career set and costume designers. Several video projections of realized performances are also shown, complementing related drawings. The exhibition, on view March 11 through August 25, 2009, is organized by Jodi Hauptman, Curator, Department of Drawings, The Museum of Modern Art.

MoMA’s commitment to stage pictures dates to 1939, when Lincoln Kirstein, a colleague of MoMA’s founding director Alfred H. Barr, Jr., and the eventual founder of the New York City Ballet, gave his personal collection of performance-related books and ephemera to the Museum, establishing a Dance Archives that would, for a brief period in the mid-1940s, become a separate curatorial department. Though the Museum’s Department of Dance and Theatre Design (later the Department of Theatre Arts) was short lived, the Museum continues to collect theater-related work today.

While the works in the exhibition vary in emphasis—from those with roots in folk traditions, machine aesthetics, or the mass media, to others that question the architecture of the stage, make abstract forms three-dimensional, or envision a total artwork on an epic scale—they all reflect a desire to create something new, to work across mediums, and to unify the arts.

Folk traditions were exploited and modified by artists associated with Serge Diaghilev’s Ballets Russes, including Natalia Goncharova (Russian, 1881-1962), who created a city square inspired by the bold outlines of Russian icon painting and the abstract patterns of peasant embroidery for the 1937 Ballet Russe de Monte Carlo revival of Le Coq d’or. A study for this elaborate backdrop is on view in the galleries.

Inspired by the world of rapid industrialization, many artists focused on the workings of the machine, including Fernand Léger (French, 1881-1955) and Oskar Schlemmer (German, 1888-1943). Commissioned for the 1922 Ballets Suédois production of Skating Rink, Léger’s mechanical costumes, once set in motion, reflected the artist’s sense that the rhythm of industry and the modern city’s everyday bustle were the most entrancing of spectacles. For Schlemmer’s Triadic Ballet, performed for the first time in its entirety in 1922, the artist created costumes that transformed the dancers from humans into mechanized puppets. Sketches of Schlemmer’s costumes are shown alongside a filmed reconstruction of the ballet from 1970.

Folk traditions merge with machine aesthetics in works such as Lyubov Popova's (Russian, 1889-1924) costume drawing for a 1921 Moscow production of Romeo and Juliet. For this design, Popova created a suit of armor out of hard-edged blue polygons resembling sheets of metal. The result is a costume that is both medieval and mechanical. Diego Rivera (Mexican, 1886-1957) emphasized the tension between industry and nature in designs for the 1932 Philadelphia Civic Opera Company's production of H.P. (Horsepower). In the drawings on view, costumes animate tropical fruit and gold and silver bars, while sets juxtapose flora and machines.

Pop art's impact, as well as the emancipating effect of 1960s Happenings on traditional performance, can be found in colorful collaged designs by Jim Dine (American, b. 1935) and David Hockney (British, b. 1937). Taking his cue from a Red Devil paint sample chart, Dine employed a rainbow palette in a series of drawings for a raucous 1966 performance of A Midsummer Night's Dream.

More recent projects by artists such as Robert Wilson (American, b. 1941) and William Kentridge (South African, b. 1955) show efforts to create multimedia productions on an epic scale. On view is a recent acquisition, a drawing from the series Preparing the Flute (2005), Kentridge's backdrop design for Mozart's opera The Magic Flute, which he directed and co-designed in 2005. To prepare for the production, the artist created black-and-white drawings that employ photography's positive and negative imagery to emphasize the opera's larger themes of darkness and light.
Just outside the galleries are two reconstructions of costumes by Pablo Picasso (Spanish, 1881-1973) for the 1917 Ballets Russes production of Parade. Picasso created set and costume designs to accompany a scenario by Jean Cocteau, music by Erik Satie, and choreography by Léonide Massine. Accompanying these large-scale works—including The French Manager (1917), which measures almost 9-feet tall—is a video excerpt of the Joffrey Ballet's 1973 revival of Parade.