Sascha Weidner, Markus Hansen, Josh Weinstein, Yang Zhenzhong. A group exhibition that explores questions of personal identity. It points to the fluidity and instability of our notions of self. It reflects on how we relate to others, who we identify with and who we do not, what pulls us together and what pushes us apart. 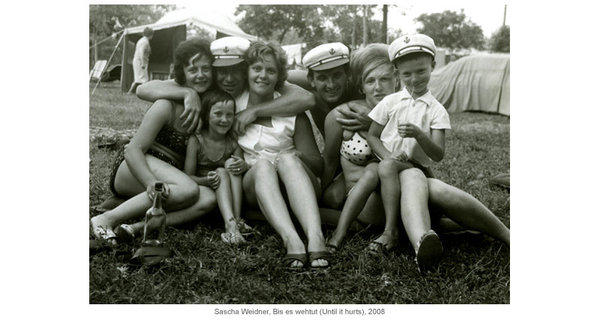 Who am I? Am I unique? Do I have an essence, an inner core that makes me myself? Am I free to choose who I am and what I do? Am I an actor, a puppet, a machine? Am I the same person as I was ten years ago? Ten minutes ago? Where do I end? Where does the rest of the world begin?

Until it Hurts is a group exhibition that explores questions of personal identity. It points to the fluidity and instability of our notions of self. It reflects on how we relate to others, who we identify with and who we do not, what pulls us together and what pushes us apart. The exhibition takes its title from Sascha Weidner's photo installation Bis es wehtut (Until it Hurts), 2008. Weidner plunges us into a constellation of impressions and memories. His images are intensely physical – full of life – but they also remind us of how fragile and fleeting life is.

Markus Hansen's video projection Other People's Feelings (2000-5) presents paired portraits in which the artist assumes the posture and expression of his sitters. Hansen likens the process to method acting. To uncanny effect, using the simplest of means, he enacts a relationship with others that seems almost parasitical – more like invasion than imitation.

For his video piece Cross Examination, 2005, Josh Weinstein accosts strangers in public spaces in New York City. He asks them to talk about who he is - what his story is - basing their account only on the immediate evidence of their encounter. The results are both telling and entertaining.

Yang Zhenzhong also approaches strangers in public spaces, armed with his camera. He asks them to repeat the words I am going to die. The piece exists in twelve different versions, made in different parts of the world (2001-2). This exhibition presents a compilation of the Chinese, French and Dutch versions.

The artists in Until it Hurts are engaged in a kind of radical, deconstructive self-portraiture. Despite their divergent lines of inquiry, they throw up a number of shared themes and figures: of replication and reflection, of the body blurred and obscured, of memory and mortality. In so doing they recall the familiar words of John Donne (1572-1631) No man is an Island, entire of itself; every man is a piece of the Continent, a part of the main... any man's death diminishes me, because I am involved in Mankind; And therefore never send to know for whom the bell tolls; It tolls for thee (Meditation XVII).