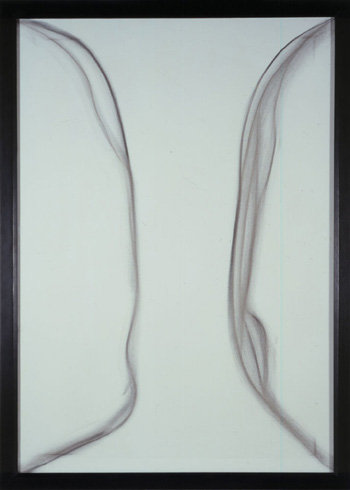 "I believe that things do not exist. A glass, a man, a hen, for example, is not really a glass, a man, a hen. In order to really exist, things would have to be eternal, immortal; only in this way would they be not merely the verification of certain possibilities, but truly things." Thus begins the famous "Letter on Immortality" by the legendary Italian artist Gino De Dominicis (1947-1998). He was one of the most fascinating artists of the Italian post-war period and his work is surrounded by a mysterious, almost mythical aura, not least on account of his refusal to document his work photographically. He was forever concerned with the immanence of reality, the absoluteness of the event, the dissolution of man and things in time and space – and with beauty. We are delighted at this opportunity to show some of the rarely seen works of Gino De Dominicis in our Munich gallery.

The works of Mária Bartuszová (1936-1996) were exhibited at documenta 12 in 2007. The exhibition at the Rüdiger Schöttle Gallery about a year ago was the first ever individual showing of her works outside her native Slovakia. The forthcoming exhibition will afford visitors an insight into a further important area of the artist's work: her fragile pieces in plaster of Paris will here be accompanied by sculptures in bronze dating mainly from the 1960s. Bartuszová's organic sculptures are inspired by natural processes, elementary forms and fundamental physical forces. Her works manifest states of transition between form and non-form, between genesis and destruction. The confrontation between these two completely different materials, bronze and plaster of Paris, tangibly expresses the two extremes of stability and fragility. Bartuszová's early bronze sculptures betray the influence of Brancusi, Moore and Arp during her years as an art student in Prague. The artist was deeply fascinated by natural forms and drew her inspiration from drops of water, rain, cornfields, birds' nests and her own sense of touch.