History of Russian Video Art. Volumes 1, 2, 3 is a large-scale project offering a comprehensive overview of the evolution of video art in Russia since its origins in the mid-1980s till today. Volume 2 presents 40 works representing the best of the production made in the decade under scrutiny. It also includes a section dedicated to the critical analysis of the very first video works made in Russia, which were exhibited in Volume 1. This part explains in simple words why video is important in contemporary culture and what contribution each single work gives to the art discourse. 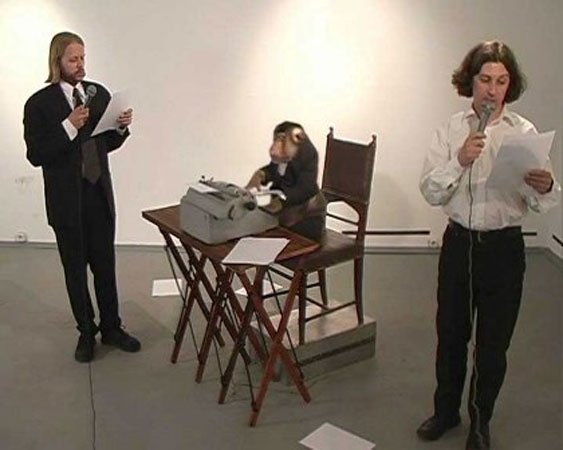 Video is the art medium of the global village. Since its birth about 40 years ago in the United States, it has grown to become the leading genre in today’s art production and the one that best allows to integrate art into the world context, rather than a regional one.
“History of Russian Video Art. Volumes 1, 2, 3” is a large-scale project offering a comprehensive overview of the evolution of video art in Russia since its origins in the mid-1980s till today. In its essence, this is an educational project because it allows the audience to get acquainted with a part of the history of Russian contemporary art which is still not well known, though its culture relevance is of primary importance. Video appeared at the same time when contemporary art emerged from the semi-clandestinity of the underground and was shown in the first independent contemporary art spaces.

As a matter of fact, video permits – better than any other medium – to get an uncompromised picture of the artist working in the crucial years of passage from Soviet to post-Soviet. Video was new the same way the concept of contemporary art was new for the wider public; it had no tradition to revolt against or to conform with. It was the territory of pure experimentation and was not influenced by the commercial strategies of the art market. In other words, it was the medium of total freedom through which artists could speak up their minds and give voice to their inner feelings. Through the years, progressively becoming more multifaceted, video kept giving an uncompromised reflection of the true picture of the artist.

“History of Russian Video Art” is structured into three parts, each one centered on an exhibition. “Volume 1” opened in January 2007 and covered the very early years of video as an art practice in Russia (1985-1999). The second installment will present the period of full acceptance and maturity of video (1995-2005) and the third one, planned to open in spring 2010, will deal with the most recent production (2000-2010).

“Volume 2” is going to take place on the premises of the Moscow Museum of Modern Art at Ermolaevsky lane. There will be about 40 works on display (single-channel videos, multi-channel installations, interactive installations, video sculptures, and so on), representing the best of the production made in the decade under scrutiny.
“Volume 2” will also include a section dedicated to the critical analysis of the very first video works made in Russia, which were exhibited in “Volume 1”. This part explains in simple words why video is important in contemporary culture and what contribution each single work gives to the art discourse.

Until April 12, 2009
Moscow Museum of Modern Art at 9 Tverskoi Boulevard

Igor Snegur
From Expressionism to Abstractionism

Moscow Museum of Modern Art presents a personal exhibition of Igor Snegur (b. 1935), one of contemporary masters of Russian avant-garde. The show unites works created during the half-century of the artist’s creative career: from the early pictures influenced by the Expressionism, to current pieces that reflect the author’s newest ideas.
At different moments, critics classified Snegur either within the second wave of the Russian avant-garde, or within Moscow receptualism — however, the artist’s oeuvre doesn’t fit into the limits of one trend or style. "From Expressionism to Abstractionism" exhibition demonstrates the creative evolution of the artist and the making of his original manner.
Regardless of time and formal framework, Igor Snegur’s paintings keep the unique precision of lines, softness of colour and depth of thought. All his pictures reflect a very special philosophical concept: the careful arrangement of primary geometric forms symbolically embodies the artist’s view of how time and space are mirrored in art.

Igor Snegur speaks of his creation: "I work with the three-dimensional space, which is not very deep, 5-10 cm approximately. However, I can sometimes penetrate deeper — it is like an artist’s journey within the pictorial space. A journey in time and space — this is what painting and its changing forms are".

Igor Snegur joined the artistic flow in the late 1950s, when he took an active part in first abstraction exhibitions in Eliy Belyutin’s Moscow studio. Snegur worked hard and experimented with various genres while studying at the Faculty of Graphic Arts of the Moscow Polygraphic Institute.

In 1975, Snegur’s works were on view at the notorious avant-garde vernissage in the "Beekeeping" Pavilion of the VDNKh (Exhibition of National Economy Achievements). In the late 1970s, Snegur founded the famous group of "20 Moscow artists" that organized annual shows at Malaya Gruzinskaya Street in 1978-1988.
Snegur’s creative activity was multifaceted from the very start: the artist collaborated in cinema and theatre, engaged in book-making and placard art. In 1988, Snegur opened his "Mars" gallery (the first private art gallery in Moscow), and since 1993 he published the "Art Panorama" magazine.