"Alexander Calder": on display the BMW 3.0 CSL. The car is displayed alongside a collection of Calder's jewellery which the artist designed between the 1920s and 1960s. As a sculptor who normally devised his own shapes, he managed to free himself from the formal structure of racing cars and, by painting them, aspired to give them his own distinctive mark. Elizabeth Peyton, known for her intimate portraits of youthful, romantic individuals ranging from friends to historical figures and celebrities. Through painting and drawing, she has created an intensely personal body of work that confidently allows for beauty in contemporary art. 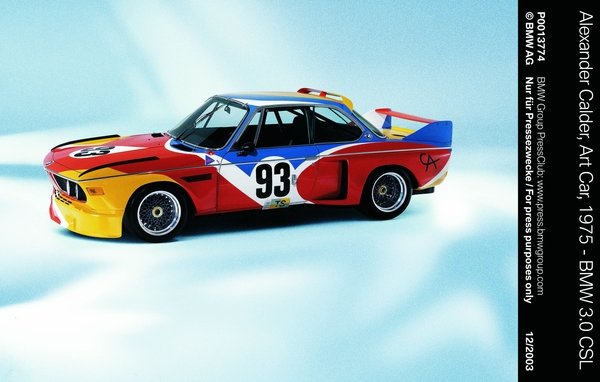 The BMW 3.0 CSL, with which Alexander Calder laid the foundation stone for the BMW Art Car Collection in 1975, will be on display at the Irish Museum of Modern Art from 1 April to 21 June 2009. The car will be displayed alongside a collection of Calder’s jewellery which the artist designed between the 1920s and 1960s. The exhibition of the Calder car will be the first time one of the collection of 16 BMW Art Cars has been shown in Ireland.

As a sculptor who normally devised his own shapes, Calder managed to free himself from the formal structure of racing cars and, by painting them, aspired to give them his own distinctive mark. As in the case of his sculptures and mobiles, he used intensive colours and gracefully sweeping surfaces which he distributed generously over the wings, bonnet and roof.

Born in Philadelphia in 1898, Alexander Calder started his career as an engineer, only then to follow in his father’s and grandfather's footsteps as a sculptor. Feeling drawn equally towards art and technology, he developed his own completely unique form of sculpture, his constructions being enormous but nonetheless light and floating in appearance. He became famous for his abstract mobiles which were hailed by critics as the most innovative American sculptures of the 20th-century. He died in New York in 1976 at the age of 78.

In 1975 this Art Car designed by Alexander Calder was driven in the 24-hour race at Le Mans by the American Sam Posey as well as Jean Guichet and Hervé Poulain from France. It was the first and last time the car was used in racing. After seven hours the car had to give up due to a defective prop shaft. The car has been on display since then.

Since 1975, prominent artists from throughout the world have designed BMW automobiles of their times, all making extremely different artistic statements. The sixteen exhibits created for the Art Car Collection until now include works by well-known artists such as Frank Stella, Roy Lichtenstein, Andy Warhol, A.R. Penck, David Hockney, Olafur Eliasson, and Jenny Holzer. The Art Cars reflect the cultural and historical development of art, design, and technology.

It was originally the French racing driver Hervé Poulain who had the idea of letting an artist have his or her way with an automobile. Poulain commissioned American artist Alexander Calder to paint his BMW racing car in the early 70's; this was the spark which led BMW to establish the Art Car Collection.

Commenting on partnership between IMMA and BMW, the Museum’s Director Enrique Juncosa said: “We are delighted to join with BMW in presenting this fascinating exhibition, which aims to shed new light on one of the 20th century’s most important artists, by exploring this wider dimension of his practice. I should like to thank BMW for their support for the exhibition, which I am sure will draw many new visitors to IMMA”.

High-quality pictures of BMW Art Cars can be downloaded from the “Photo” section at http://www.press.bmwgroup.com (search string “Art Car”).

This is the first exhibition in Ireland by the American painter Elizabeth Peyton, known for her intimate portraits of youthful, romantic individuals ranging from friends to historical figures and celebrities. Through painting and drawing, she has created an intensely personal body of work that confidently allows for beauty in contemporary art. This exhibition of some 20 paintings and works on paper, dating from the 1990s to the present day, has a particular focus on poetry and literature, interiors and photographs, desire and love.

Peyton came to prominence in New York in the early 1990s as one of the few young artists exploring figurative painting. Although her paintings have clear debts to 19th-century modernist painting - from Edouard Manet to John Singer Sargent – Peyton’s work portrays an intimate understanding of 20th-century artists such as David Hockney, Alex Katz, and above all, Andy Warhol. Her dazzling palette of jewel like color with a refined graphic sensibility is enormously seductive in form and content, celebrating the aesthetics of youth, fame, and creative genius. The portraits and still lifes in this exhibition encapsulate some Peyton’s typical inspirations spanning from iconic 19th century literary Realist or Romantic figures, Nouvelle Vague filmmakers of the 1960s and current famous singer poets such as Patti Smith or Bob Dylan.

A fully-illustrated artist’s book accompanies the exhibition, designed by Elizabeth Peyton herself and produced by Charta Books Ltd. An afterword is written by Enrique Juncosa, Director, IMMA and essay by Rachael Thomas, Senior Curator: Head of Exhibitions, IMMA. This publication also includes extracts from classic texts by authors such as Honoré de Balzac, the Goncourt Brothers and Gustave Flaubert alongside an interview of filmmaker François Truffaut and Bob Dylan lyrics to cite just a few examples. Peyton’s selection ties in closely with the works presented in the exhibition and reveals some of her key inspirations.

Presented with the support of the Merrion Hotel, Dublin.