The new body of work by Susan Collins combines digital technologies with the classical traditions of English landscape painting. The exhibition will feature a series of five live Seascape projections positioned within the gallery windows facing out to sea. Each reveal in real-time an image being constructed live from the webcams installed at the five locations across the South East coast. 15 young curators have commissioned local young artists to produce a piece of work responding to the theme Things Fall Apart. 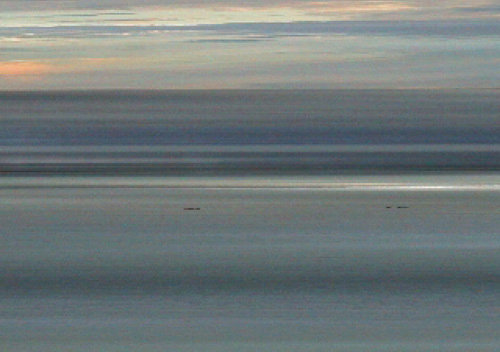 Seascape is presented at De La Warr Pavilion, Bexhill-on-Sea, 4 April – 14 June 2009. The exhibition will feature a series of five live Seascape projections positioned within the gallery windows facing out to sea.

Each reveal in real-time an image being constructed live from the webcams installed at the five locations across the South East coast. Continually collecting this data - from top to bottom and left to right in horizontal bands - these images are constantly generated and renewed pixel by pixel in front of the viewer. A selection of digital prints from this vast archive of material will also be presented as part of the exhibition. Poised, like the sea itself, between unchanging stillness and continuous movement, counterpointing the ongoing motion of the pixel with the endless vigil of the lens staring out to sea, these projections and prints will mark the limits of the visible throughout the day, presenting the viewer with a series of infinitely evolving seascapes.

To coincide with the exhibition, a publication on the Seascape project will be produced by Film and Video Umbrella. The book will feature newly commissioned essays by Sean Cubitt and Nicholas Alfrey and include an extensive colour plate section of archive seascape images. To order a copy email books@fvu.co.uk

Also produced to coincide with the exhibition, Susan Collins has released an exclusive signed print featuring a beautiful digital seascape of Bexhill which was captured from the webcam at the De La Warr Pavilion. Selected and printed by Susan, the print will be only available from the venue for a limited time during the exhibition dates 4 April - 14 June 2009. To find out more or place your order visit: http://www.dlwp.com/susancollins

About the artist
Susan Collins (b. 1964 London) is one of the UK’s leading artists working with digital media. For the past decade the collision between the real and the artificial or virtual has been a key area of investigation. Collins works across public, gallery and online spaces. Works include In Conversation; Tate in Space (a Bafta nominated Tate netart commission); Transporting Skies which transported sky (and other phenomena) live between Newlyn Art Gallery, Penzance and Site Gallery Sheffield; Fenlandia and Glenlandia - live year long pixel by pixel internet transmissions from remote landscapes, and The Spectrascope, an ongoing live pixel by pixel transmission from a haunted house.
Recently completed commissions include a wildlife surveillance system for Sarah Wigglesworth Architects’s RIBA award winning Classroom of the Future and Underglow, a network of illuminated drains for the Corporation of London for Light Up Queen Street
Recent exhibitions have included Outlook Express(ed), Oakville Galleries, Ontario, Canada; Digital Aesthetic 2, Harris Museum and Art Gallery, Preston; Webscape, Vestsjællands Kunstmuseum, Søro, Denmark 2007; Video Vortex, Montevideo/The Netherlands Media Art Institute, Amsterdam and Multiplicities at ARC Projects, Sofia, Bulgaria.
Susan Collins is Reader in Fine Art at the Slade School of Fine Art, University College London.

Film Video Umbrella
Film and Video Umbrella curates and produces film, video and new media projects by artists which are commissioned and presented in collaboration with galleries and venues across the UK.
http://www.fvu.co.uk

Venue
The De La Warr Pavilion is a Modernist icon for contemporary art situated on the seafront at Bexhill on Sea, East Sussex. This Grade One listed building has welcomed over half a million visitors since re-opening in October 2005 after a major £9 million refurbishment and redevelopment. As well as being one of this country‘s architectural landmarks, it also has an enviable reputation as home to some of the best contemporary art on the international circuit today, exhibited in two beautifully restored galleries.

15 young curators have commissioned local young artists to produce a piece of work responding to the theme Things Fall Apart. The exhibition draws on ideas of fragmentation and disintegration and what this means to local young people growing up in the world today. The Young Curators have selected 9 artists to exhibit their work in the gallery at the De La Warr Pavilion. This is a unique collaboration between young curators and their peers - an insightful exhibition not to be missed.

Directions
The De La Warr Pavilion is located on the Marina on the sea-front of Bexhill, East Sussex TN40 9 UK
Opening Hours
From April 2009, the Pavilion is open 10am to 6pm, 7 days. The building will also be open in the evenings for programmed events, but the galleries will close at 6pm.
Entrance to the Pavilion is free.