Scratching on Things I Could Disavow: A History of Art in the Arab World / Part 1_Volume 1_Chapter 1 (Beirut: 1992-2005). In 2007, Raad initiated a research project to identify the context surrounding the rise of a new cultural infrastructure in the Arab world, while also examining how culture and tradition may have been affected in a region of war and conflict. This is the first U.S. presentation of the project. 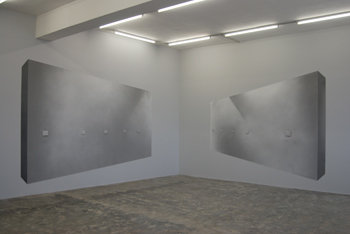 In 2007, Walid Raad initiated a research project to identify the context surrounding the rise of a new cultural infrastructure in the Arab world, while also examining how culture and tradition may have been affected in a region of war and conflict. For his exhibition at REDCAT, Walid Raad presents Scratching on Things I Could Disavow: A History of Art in the Arab World / Part 1_Volume 1_Chaper 1 (Beirut: 1992–2005), the first major presentation of this new project in the U.S.

Scratching on Things I Could Disavow expands upon The Atlas Group, a monumental 15-year project that examined the conditions of the Lebanese wars of 1975 to 1991 through the collection, organization and production of archival documentation. This new project which includes photography, sculpture and wall installations marks a critical juncture in Raad's practice, which at once marks a departure from his work with The Atlas Group, while also expanding upon its historical and theoretical framework.

Over the past ten years, the Arab world has witnessed the emergence of a number of art festivals, funds, private collections, galleries, art schools and historical and contemporary art museums, raising questions about how culture will be conceived, made, distributed and consumed. In a context where cultural tourism has become an instrument of economic growth and power, Raad's project unpacks the ideological, economic and political dimensions of this phenomenon that has given birth to the Saadiyat Island in Abu Dhabi (a complex of museum outposts where a Guggenheim Museum designed by Frank Gehry and a Louvre Museum designed by Jean Nouvel will be built); educational arts programs including New York University's Institute of Fine Arts in Abu Dhabi and Virginia Commonwealth's School of Art in Qatar; and the Dubai Art Fair, Artist Pension Trust in Dubai, the Gulf Arab Art Fair and the Sharjah Biennial.

Conceptually, Raad proceeds from the writings of Jalal Toufic and his idea of "the withdrawal of tradition past a surpassing disaster" to also question how culture and tradition in the Arab world may have been affected, materially and immaterially, by the various wars that have been waged there by native and external powers. Here, Toufic postulates that certain violent events not only lead to the material destruction of culture but can also cause culture and tradition to "withdraw" from the community to which it belongs. Artists, writers and thinkers can sometimes sense and express this immaterial affect in their work. For example in Part 1_Chapter 1_Section 79: Walid Sadek's Love Is Blind (Modern Art Oxford, UK, 2006), Raad attempts to manifest this immateriality by creating a tromp l'oeil painting of fellow contemporary artist Walid Sadek's Love Is Blind, in which Sadek traces the lineage of an elder artist, Mustafa Farroukh, by only providing the works' captions, texts and the approximate spaces they would have occupied. According to Raad, the work itself is not available to vision.

The exhibition is accompanied by a publication, designed by Michael Worthington in collaboration with the artist, which serves as an extension of the discursive space for the project.

Walid Raad is an artist and an Associate Professor of Art in The Cooper Union (New York, USA). Raad's works include The Atlas Group, a fifteen-year project between 1989 and 2004 about the contemporary history of Lebanon, and the ongoing project titled Scratching on Things I Could Disavow: A History of Modern and Contemporary Art in the Arab World. His books include The Truth Will Be Known When The Last Witness Is Dead, My Neck Is Thinner Than A Hair, and Let's Be Honest, The Weather Helped.

Raad's works have been shown at Documenta 11 (Kassel), the 50th Venice Biennale (Venice), The Hamburger Bahnhof (Berlin), The Museum of Modern Art (New York), Homeworks (Beirut) and numerous other museums and venues throughout Europe, the Middle East, and North America. Raad is also the recipient of the Alpert Award in Visual Arts (2007), the Deutsche Börse Photography Prize (2007), and the Camera Austria Award (2005).

Major support provided by The Herb Alpert Foundation. The Alpert Award in the Arts, a fellowship program that supports innovative practitioners in the fields of dance, film/video, music, theater and visual arts, is administered by CalArts on behalf of The Herb Alpert Foundation. This exhibition is also made possible by generous support from The Andy Warhol Foundation for the Visual Arts, Eve Steele and Peter Gelles, the Nimoy Foundation, and the Harpo Foundation. Free gallery admission underwritten by generous support from Ovation TV. The Standard is the official hotel of REDCAT.