On view are 4 paintings, 4 works on paper, and one large-scale sculpture, all completed between 2007 and 2009. Inspired by motocross and NASCAR racing scenes, these new works demonstrate Morley's ongoing status as a master of the painterly who continues to explore a relationship between the mediums of painting, watercolor and sculpture. 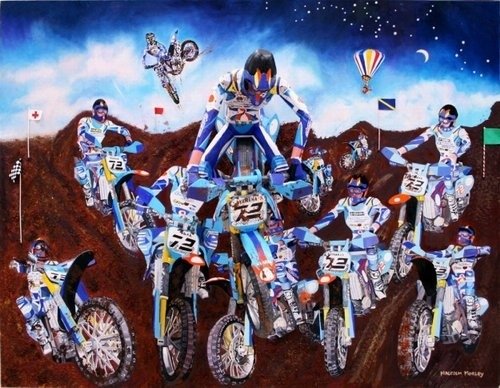 Sperone Westwater is pleased to announce a solo exhibition by Malcolm Morley, the first gallery show of new work since the artist’s retrospective at the Museum of Contemporary Art, North Miami in 2006.
On view will be four paintings, four works on paper, and one large-scale sculpture, all completed between 2007 and 2009. Inspired by motocross and NASCAR racing scenes, these new works demonstrate Morley’s ongoing status as a master of the painterly who continues to explore a relationship between the mediums of painting, watercolor and sculpture.
In the new paintings Texas Swing (2009), Hubris (2008), Thor (2008), and Blue Boyz (2008), Morley presents the figure of an athlete as a mythic hero, creating a kind of contemporary American mythology in paint. Describing the evolution of this series, Morley writes:
While waiting for a train in Pennsylvania Station, I came across a motocross magazine with a cover featuring a young motocross rider and a colorful bike in midair doing an impossible maneuver in a blue sky. […] For me that is the modern myth. A myth has to have a hero. A hero has to face danger and death, have flaws and an Achilles’ heel.

Watercolor painting has also long held an important role for the artist. He has employed the medium in a variety of ways including directly as a source for his ambitious large-format oil paintings. In these new works on paper, Morley uses found motocross and NASCAR imagery, but now alters these photos with rips and folds. The resulting assemblage becomes a source for Morley’s abstract compositions, manifested in three different forms – in collage, watercolor, and in paint. In this show Morley’s mythic racing heroes are also materialized as three-dimensional sculptures made of paper and linen attachments. At the artist’s request, the materials that make up the large-scale sculpture Ring of Fire (2009) shall remain classified.
Morley, who first achieved widespread recognition in the 1960s for his super-realist paintings, defines his aim as a preoccupation with the act of painting and the sensation of transforming closely observed images to a canvas. As the artist stated recently, “It's much more difficult to make an abstract painting that is real than an abstract painting that is abstract.” Morley depicts details: each calibrated digital image as a whole is fragmented into a grid of small squares or "cells" as the artist calls them, from which Morley paints one discrete component at a time, turning the canvas upside down and sideways so that the abstract shape and color tonality of each part is addressed. Upon close examination, these dynamic images of movement and action break down into mosaics of small, beautifully incandescent abstract paintings, where foreground and background co-exist on the same plane. Despite Morley’s turn to more vernacular subject matter, this new series strongly affirms that Morley’s true topic is the art of painting, not the things or events he captures in paint.

Born in London in 1931, Morley studied at the Camberwell School of Arts and Crafts and the Royal College of Art. Since his first exhibition in New York in 1957, Morley has had numerous exhibitions in Europe and North America and has participated in many international exhibitions, including Documenta 5 and 6. Following his first retrospective in 1983 organized by the Whitechapel Art Gallery, Morley was the first artist awarded the Turner Prize for British artists. Subsequent presentations of his work include a survey of watercolors at the Tate Gallery, Liverpool (1991), a one-man show at the Musée national d'art moderne - Centre Georges Pompidou, Paris (1993), an exhibition organized by Fundación "La Caixa," Madrid, which traveled to the Astrup Fearnley Museet for Moderne Kunst, Oslo (1995-96), and a retrospective at The Hayward Gallery, London (2001). In 2006, Morley’s work was shown in a major retrospective entitled “The Art of Painting,” curated by Bonnie Clearwater at The Museum of Contemporary Art, North Miami. Morley’s work can be found in museum collections worldwide. Morley’s work is currently included in “Picturing America: Photorealism in the 70s”, on view at the Deutsche Guggenheim in Berlin until 10 May 2009.

For further information please contact Maryse Brand at Sperone Westwater at 212–999–7337 or by email at maryse@speronewestwater.com